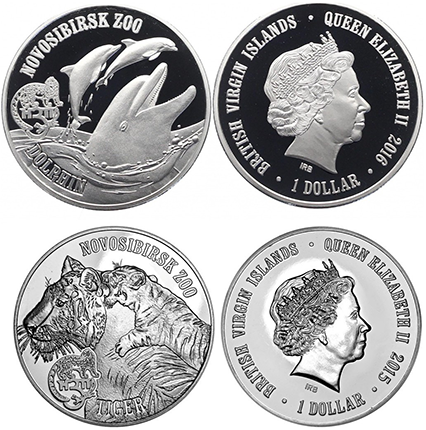 Fake coins, on offer by a Russian company called “Katz Coins & Notes” or “Coinsking.” These items have no monetary or numismatic value.

(Thursday, October 27)–The government of the British Virgin Islands is advising the public, especially coin collectors, that “coins” purported to be issued in the name of the British Virgin Islands have been offered for sale to coin dealers and the general public. (Two examples are shown above.) The coins are being sold from a website originating in Russia, by a company calling themselves “Katz Coins & Notes” or “Coinsking” with offices in Novosibirsk. The designs feature the Sibir Hockey Club in Russia and animals from Novosibirsk Zoo. The seller also purport to have offices in Prague, Czech Republic. The coins are also being sold by two dealers on ebay.

All are advised that these “coins” have never been approved by the government, the Foreign and Commonwealth Office, or Her Majesty the Queen. Immediate action is being taken to investigate the perpetrators of this distribution. In the meantime, the government of the British Virgin Islands is alerting any potential purchasers that these items are not authorized coins, and thus have no collector value.

The poor quality and lack of detail of these pieces should both alert and deter any collector who considers adding these items to their collection or parting with money to purchase counterfeit or worthless items.

If you encounter these coins either on ebay or by a direct-marketing offer, do not purchase them, as these items are false and have no monetary or collector value. For information about genuine and authorized coins issued by the Treasury of the British Virgin Islands, please visit the website of Pobjoy Mint at http://www.pobjoy.com/products/commemorative-coins/british-virgin-Islands.