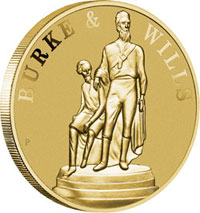 This month, the Perth Mint of Australia has released the Burke & Wills Stamp and Coin Cover. The cover is issued to celebrate the 150th anniversary of the Burke and Wills expedition, which left Melbourne for the Gulf of Carpentaria in August 1860. Burke and Wills were the first European settlers to cross the Australian continent from south to north.

The cover includes an uncirculated $1 coin created exclusively for this product. The aluminum bronze coin depicts Charles Summers’ sculpture at the corner of Melbourne’s Swanston and Collins Streets, with the inscription “Burke & Wills” and the Perth Mint’s “P” mint mark. The obverse of the coin features the Ian Rank-Broadley effigy of Queen Elizabeth II, with inscriptions “Elizabeth II”, “Australia 2010”, and the legal tender face value “1 Dollar”.

The coin is mounted on a card featuring an oil painting by Henricus Leonardus van den Houten, The exploring party coming upon an encampment of natives. This card is placed within an envelop portraying a portion of the Samuel Calvert engraving Exploration expedition, the start from Royal Park. A commemorative 60 cent stamp featuring Burke & wills is placed on the envelope. 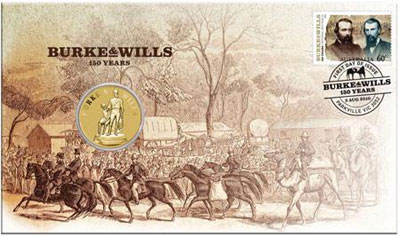 Late last year, the Royal Australian Mint released two 2010-dated Burke and Wills Expedition Coins. The 20 cent and $1 coins highlighted the beginning and the end of the expedition.

The Burke & Wills Stamp and Coin Cover can be purchased at the Perth Mint.