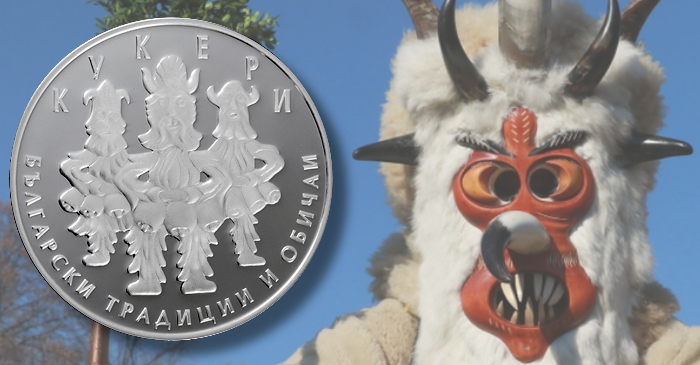 The Bulgarian National Bank has issued new silver Proof collector coins entitled “Bulgarian Traditions and Loves,” which feature a most unusual national custom, kukeri. Uniquely Bulgarian by custom and practice, it is believed that today’s Bulgarian masked good-spirited play-acting has its origins to the pre-nuptial rites practised by the ancient Thracians. In most parts of Bulgaria, they call this ancient custom kukeri (or occasionally, survakari), with most kukeri pageants falling on feast days between Christmas and Easter. In the days of old, they included only unmarried men dressed as maidens or else donning animal skins as fertility symbols. Masked young men, with a string of bells slung from cummerbunds, would tour villages summoning everyone to the square. Survakari would then perform ritual weddings, while kukeri would mimic ritual field tilling, synonymous with fertility, and welcoming many children after marriage. Costumes differ across Bulgarian ethnographic areas, but the costumes in western regions usually resemble animals, those further east being more androgynous. Each mask is nevertheless unique, only limited by its maker’s imagination. Masks and costumes often resemble phantasmagorical creatures with poking fangs, horns and tails, or beaks. The traditional costumes are made of sheep and goat skins, feathers, horns, leaves, wool, and other natural materials. As with any living tradition, kukeri pageants are evolving to include new memes and imagery that now broaden the circle of participants’ gender and age. Today, they are cheerful feasts of folk craft and traditional trades marking the end of winter, the awakening of nature, and the revival of life.

Annual kukeri rites and festivals are staged at several international masked play-acting festivals, notably, in Bulgaria, there is the Surva, hosted by the town of Pernik since 1966, and the Kukerlandia, in Yambol.

The coins are produced by the Bulgarian National Mint at their facilities in Sofia on behalf of the National Bank and designed by Vanya Dimitrova — Hadzhigaeva. The obverse side offers an excellent glimpse into the world and the tradition of Kukeri with the depiction of three participants in dance. The text КУКЕРИ (“Kukeri”) is placed above the primary design and the inscription БЪЛГАРСКИ ТРАДИЦИИ И ОБИЧАИ (“Bulgarian Traditions and loves”) is placed below. The reverse side includes the Bulgarian crest centred with the issuer of the coins, БЪЛГАРСКА НАРОДНА БАНКА (“Bulgarian National Bank”), along with the denomination of 10 ЛЕВА. The year of issue is shown in two digits on either side of the coin’s value.

The coins are encapsulated and are accompanied by a certificate of authenticity. Those in Bulgaria may purchase collector coins in person at the teller desk No.1 in the BNB bank hall, Sofia, 1, Knyaz Alexander I Square, Monday to Friday, from 8:30 to 12:30 and from 1:00 p.m. to 3.45 p.m. Additional information is posted on the Bulgarian National Bank’s website.

There is limited ability to purchase directly from the Mint of Bulgaria. Items for purchase are available here.