Bob R. Simpson, a well known collector and co-chairman of the Texas Rangers baseball team, has paid $1 million for the finest known 1943-S Bronze Lincoln Cent. The coin, which is graded MS62BN in a PCGS Secure holder, is the finest of four known 1943-S bronze cents and represents an upgrade for Simpson’s all-time finest collection of Lincoln Cents Off-Metal Strikes, Circulation Strikes 1943-1944.

The transaction was arranged by Legend Numismatics (www.LegendCoin.com) of Lincroft, New Jersey after “determined negotiations” with an East Coast dealer representing the seller who is described only as “a long-time collector,” according to Legend President Laura Sperber. 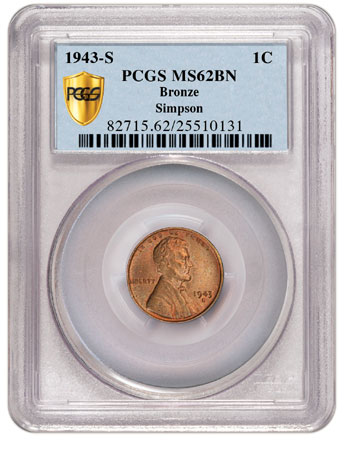 The coin was certified PCGS Secure Plus™ MS62BN by Professional Coin Grading Service during the recent September 2012 Long Beach Coin, Stamp & Sports Collectibles Expo where it was briefly exhibited in the Collectibles Display area.

PCGS President Don Willis stated:  “We were extremely pleased to have this coin submitted to PCGS at the recent Long Beach Expo.  The Simpson Collection now contains the finest known bronze cent from each mint, including the unique 1943-D.  It’s been a pleasure for PCGS to play a small part in the creation of this unsurpassable set.  The finest collections belong in PCGS holders.”

Laura Sperber said, “Mr. Simpson is thrilled and proud to own the absolute finest set of bronze 1943 and zinc-coated steel 1944 Lincoln cents.  He ranks this as one of the highlights of his extraordinary coin collection, and he wants to eventually display the upgraded set at a major coin show.  Even though there’s a dollar value for what we paid for the coins in the set, Mr. Simpson and I agree it’s priceless because it can not be duplicated.”

The United States Mint switched from bronze planchets to zinc-coated steel for cents in 1943 because copper was a strategic metal needed during World War II.

“By error, some bronze planchets made it into the hoppers at all three Mints, were struck and released into circulation.  These have become the most famous and valuable of all off-metal errors,” states PCGS CoinFacts (www.PCGSCoinFacts.com).

Since its founding in 1986, Professional Coin Grading Service experts have certified over 24 million coins with a total market value of over $26 billion. PCGS (www.PCGS.com) represents the industry standard in third-party certification.       The PCGS Set Registry was established in 2001 and now hosts over 58,000 sets.  For additional information about PCGS and its services, visit www.PCGS.com or call PCGS Customer Service at (800) 447-8848.