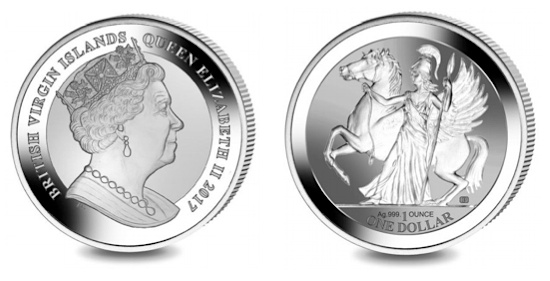 The Treasury of the British Virgin Islands has issued (September 7) a new silver bullion coin featuring the mythological stories of Ancient Greece. This design is dedicated to the story of Pegasus, the white divine stallion with wings. Pegasus is often depicted or referred to as a symbol of wisdom and inspiration.

The story of Pegasus begins when Perseus, son of Danae and Zeus, is sent to kill Medusa, one of the three Gorgons. It was said that anyone unfortunate enough to gaze on her face would turn to stone. The god Hermes and the goddess Athena came to aid Perseus with special gifts, including a shield which Perseus used as a mirror so he did not look directly at Medusa. When Perseus beheaded Medusa it is said that that was born from the blood of the Gorgon.

After Pegasus had helped Perseus rescue the princess Andromeda, he was carried to Mount Helicon where he was entrusted to the care of the Muses. 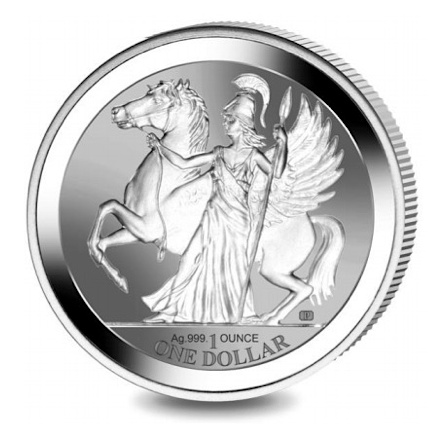 Many wanted to capture Pegasus but no one could work out how to tame such a magnificent creature. After being advised to sleep in the temple of Athena, Bellerophon, “the greatest hero and slayer of monsters,” saw the goddess before him holding a golden bridle. When he awoke he was alone, but the bridle remained. He ran from the temple and found Pegasus drinking at a spring. Bellerophon put the charmed bridle on the winged horse’s head with little difficulty and, with the bridle in place, Pegasus became gentle and tame and Bellerophon became his master.

The inspiring design on the reverse side of the coin is based on a famous Greek image of the famed winged horse Pegasus and the goddess Athena. 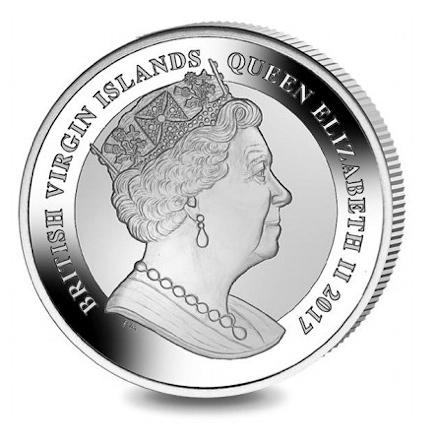 The obverse side of the coin carries an effigy of Her Majesty Queen Elizabeth II, a new design exclusive to the Pobjoy Mint. Both designs utilize a frosted background.

The bullion coins are available from October 3, 2016, and are presented in a heat-sealed clear pack containing the required quantity. The single coin is also presented in an individual heat-sealed pack. For more information on this and other coins issued by the government and treasury of the British Virgin Islands, please visit the Web site of the Pobjoy Mint. International sales will be dispatched where applicable.