The government and Treasury of the British Virgin Islands have issued (6th March) a never-before-seen design that pays tribute to the United States Capitol Building: in a unique tribute, the coin is produced in the shape of the building itself. The coin is being issued on the occasion of the 225th anniversary of the open competition that was organised to see which architect could propose the best design for the building. It is fitting that the British Virgin Islands issue this uniquely shaped coin, since one of their own, William Thornton (1759–1825), secured the win and a $500 prize for his extraordinary architectural design.

The U.S. Capitol, also known as the Capitol Building, is the headquarters of the U.S. Senate and House of Representatives. It is located on top of Capitol Hill in Washington, D.C. The word “capitol” has its origins in Latin and is associated with the Roman god Jupiter Optimus Maximus (also called Jupiter Capitolinus), whose temple is situated on Capitoline Hill—one of the Seven Hills of Rome.

The initial competition for the new nation’s state house was held in the spring of 1792, a year after the plans for the Presidential Mansion (later the White House) were finalised and underway. A late entry from amateur architect William Thornton was the source of the iconic shape that we recognise today. Thornton, a well-traveled native of the British Virgin Islands, gained inspiration for the frontage of the building from the east front of the Louvre and from the Paris Pantheon. His designs were not received by the judges on the panel until the 31st January 1793. Owing to praise from those concerned, including the first president, George Washington—who commented that the plans were for a structure of “Grandeur, Simplicity, and Beauty”—and Thomas Jefferson (himself a talented architect), Thornton was declared the winner. The princely prize of $500 was awarded to him, and the plans were adopted for the building. 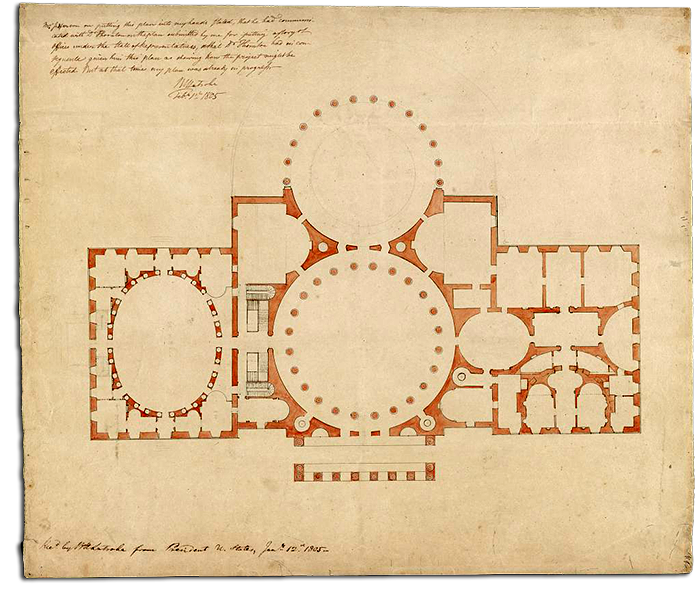 William Thornton’s 1793 ink-and-watercolor drawing of the interior plan for the building. (Photo courtesy Library of Congress)

The first cornerstone of the Capitol was laid by President Washington in 1793; construction of the 16-acre building continued until 1800, the same year the Presidential Mansion was finished. Upon its completion, the building was considered one of the grandest structures in the new Republic, with more than 15 acres of floor space built over four levels. The famous dome—which is constructed out of cast iron and painted to look like marble—was not added until 1855, with its completion just after America’s civil war in 1866. The addition of the dome meant the Capitol Building stood three times as tall as the original structure and had a combined weight of 4,041 metric tons. In 2014, scaffolding was erected around the dome for a restoration project; it was not removed until the end of summer 2016, and the renovation is scheduled to be completed by early 2017. 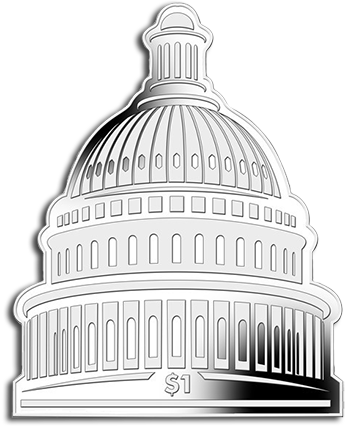 The coin is produced by the Pobjoy Mint, United Kingdom, on behalf of the Treasury of the British Virgin Islands. In addition to the eye-catching shape, the obverse design includes the easily recognisable dome and columns that make up the familiar look of the Capitol. The coin’s denomination, $1, is placed just under the columns towards the base. 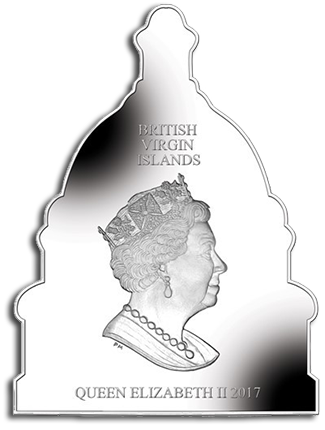 The reverse includes an effigy of HM Queen Elizabeth II that is exclusive to the Pobjoy Mint. Above the Queen’s portrait is the text BRITISH VIRGIN ISLANDS, while QUEEN ELIZABETH II and the year of issue are placed below.

The Capitol Building shaped coin is presented in a faux-leather pouch in red, white, and blue, representing the American flag. For additional information on this and other coins issued by the government and Treasury of the British Virgin Islands, please visit the website of the Pobjoy Mint.   ❑