The Treasury of the British Virgin Islands have issued (28th October) a new coin that has been struck in titanium and tinted with a turquoise color, along with companion pieces in cupro-nickel and silver. The design features one of the world’s most curious but graceful underwater creatures, the seahorse. Their scientific name is Hippocampus, after an ancient Greek mythological creature, the hippokampos (“hippos” meaning “horse” and “kampos” meaning “sea monster”). The name is derived from the shape of the head and neck, which is suggestive of a horse. Seahorses also feature segmented bony or spiny armor, an upright posture, and a curled prehensile tail, which they rely on to anchor or attach themselves to plants or coral while feeding. Over time, the name of the mythical animal became synonymous with the elegant and floating underwater creatures we have come to be familiar with. The word “seahorse” can refer to any of 54 species currently known, which are found mainly in shallow tropical and temperate waters throughout the world.

Considered one of the most beautiful and elegant of all marine animals, these curious creatures have featured throughout time in both mythical stories and legends. They are truly unique, not just because of their unusual equine shape but also due to their unique mating habits. Unlike most other fish, they are monogamous and mate for life; rarer still, they are among the only animal species on Earth in which the male bears the unborn young. 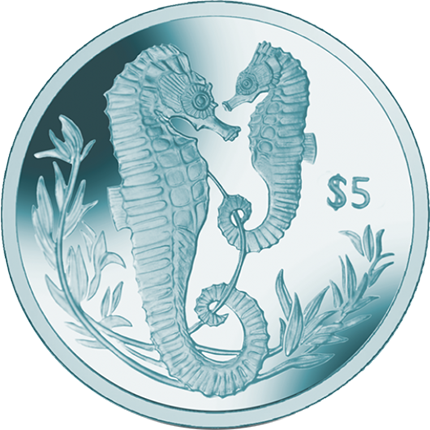 This new 2017-dated coin is produced by the Pobjoy Mint on behalf of the Treasury of the British Virgin Islands. The beautiful design depicts an adult and a baby seahorse with their tails entwined around leaves, creating a magical and distinctive scene that is sure to be popular with collectors everywhere. The $5 coin has been specially produced in turquoise titanium to mimic the warm seas where the animal lives. 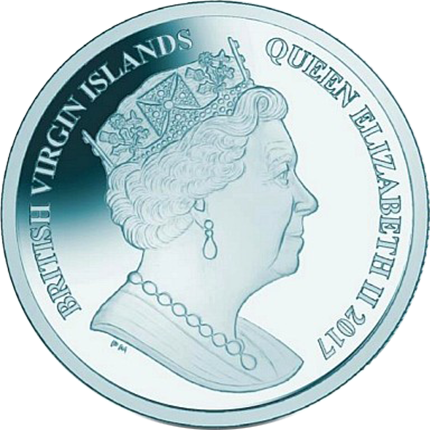 The obverse of the coin features an effigy of Her Majesty Queen Elizabeth II for exclusive use by the Pobjoy Mint.

(Scroll down for ordering information.)

Due to the complexities of striking titanium coins and the fact that titanium reacts differently with every strike, each $5 seahorse coin is technically different from all the others. They also have a lined effect that is unique to this metal. The cupro-nickel, Brilliant Uncirculated coin is shipped in a branded Pobjoy Mint blue presentation pouch. The silver Proof and titanium Select Uncirculated coins are shipped encapsulated in an acrylic capsule for protection and housed in a custom red box with a certificate of authenticity. For more information on this and other coins issued by the Treasury of the British Virgin Islands, please visit the website of the Pobjoy Mint.