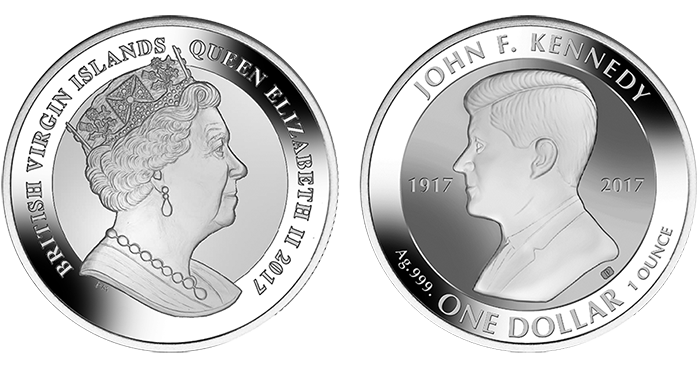 The Treasury of the British Virgin Islands have issued (17th May) a new crown coin that marks the centenary of John F. Kennedy’s birth.

John Fitzgerald Kennedy, also known as JFK, was born in May 1917 in Massachusetts as the second son of Joseph P. Kennedy and Rose Fitzgerald, then a prominent Irish Catholic family. He spent the first 10 years of his life in Boston until his family moved to the Bronx, New York, where he spent his middle-school years. Kennedy later went on to study at the London School of Economics and Harvard University, which laid the foundations of his political career. The Kennedys were a very well established U.S. political family, with a one-time mayor of Boston on JFK’s mother’s side of the family, and his father’s position as ambassador to Great Britain. The Kennedy connections and shrewd business acumen would eventually produce a U.S. president, three senators, and multiple other politicians.

Kennedy had a distinguished military career from 1941 to 1945, serving during WWII in the Pacific theatre of operations. On one notable occasion, the torpedo boat Kennedy was serving on was sunk. In order to save the crew he had to swim a distance of about three and a half miles at night whilst towing an injured comrade from the wreck to a nearby island! JFK received multiple medals and awards for his service, including the Purple Heart, making him the only president to date who has received one.

In 1953, as a junior senator from the state of Massachusetts, he married the glamourous Jacqueline Bouvier (1929–1994), a popular socialite from Manhattan and East Hampton, New York. Together they made a very striking couple, she being an accomplished photojournalist and he with such a promising political career ahead of him. JFK was elected as the 35th president of the United States in November 1960 after a hotly contested election against then–vice president Richard Nixon, the nominee for the Republican Party. Kennedy served from the 20th January 1961 (his inauguration day) until his assassination on the 22nd November 1963 while on a day trip to attend a political rally in Dallas, Texas. He was survived by his young wife, former first lady Jacqueline Kennedy, and their two young children, Caroline and John Jr.

Despite his relatively short service he was incredibly influential and advocated for freedom at home and abroad. Kennedy presided during some very pivotal events including, the Cuban Missile Crisis, the Bay of Pigs invasion, the nuclear test ban treaty, the establishment of the Peace Corps, developments in the space race, the building of the Berlin Wall, the Trade Expansion Act to lower tariffs, and the Civil Rights Movement. The assassination of JFK is a topic that still generates much controversy and debate, despite the event’s occurring nearly 54 years ago. The official report is that he was shot by Lee Harvey Oswald in Dallas, Texas. The gunman supposedly acted alone, firing at the president from the sixth-story window of a nearby building as he drove in an open-top car in a motorcade. Kennedy was laid to rest in the Arlington Memorial Cemetery in Washington, D.C. His gravesite includes an eternal flame that serves as a memorial and is visited by many admirers who visit the nation’s capital. 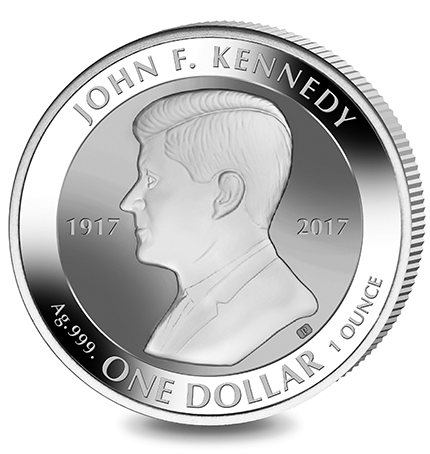 The coin is produced by the Pobjoy Mint, United Kingdom, on behalf of the Treasury of the British Virgin Islands. The reverse design is based on the image of JFK and inspired by a medal by the internationally acclaimed medallist Paul Vincze (1907–1994), a Hungarian artist who excels at portraiture (scroll to the bottom to see the medal). 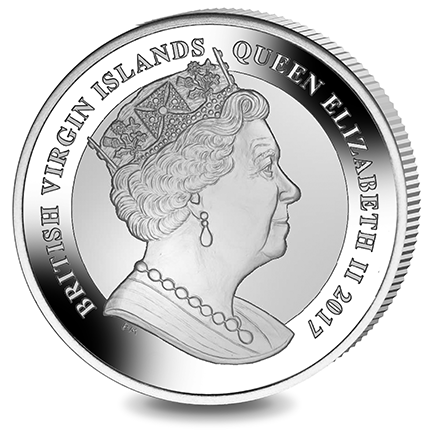 The obverse features an effigy of HM Queen Elizabeth II designed and under exclusive use by the Pobjoy Mint. 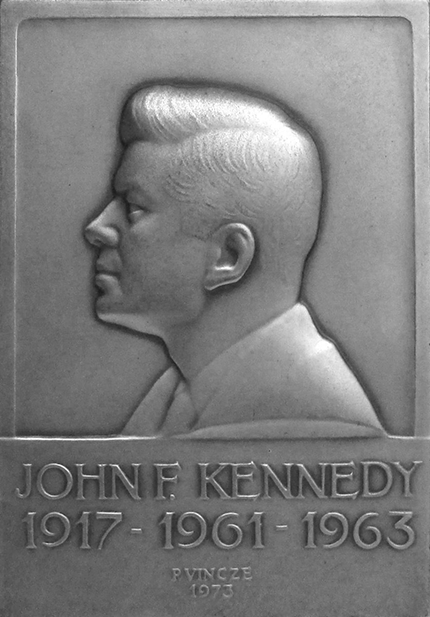 The crown coin is befittingly presented in a folder in the shape of the Purple Heart, which was awarded to John Kennedy in recognition of his heroism and his being wounded during combat. The front of the folder includes one of JFK’s more memorable quotes, which he delivered during his inauguration: “And so, my fellow Americans, ask not what your country can do for you; ask what you can do for your country.” 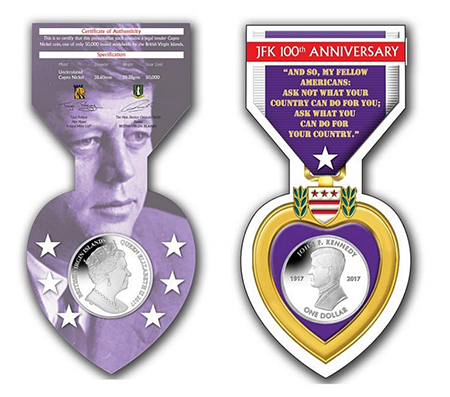 Please visit the e-webshop of the Pobjoy Mint for additional information on this and other coins issued by the Treasury of the British Virgin Islands. ❑