The Treasury of the British Virgin Islands Government has launched a new coin celebrating the 475th anniversary of the birth of Sir Francis Drake (c. 1540 – 1596). Considered one of the greatest sea captains of all time, Drake was born in Devonshire, England around 1540 and first took to the seas at the age of 12 or 13. He was to become a successful privateer, a private person or ship authorized by a government to attack foreign vessels during wartime.

Drake is also remembered as a talented navigator who was commissioned by Queen Elizabeth I to be the head of an expedition that was to sail around the world; on November 15, 1577, Drake set sail with a crew of 164 men for what would be the first successful circumnavigation of the Earth by an Englishman. 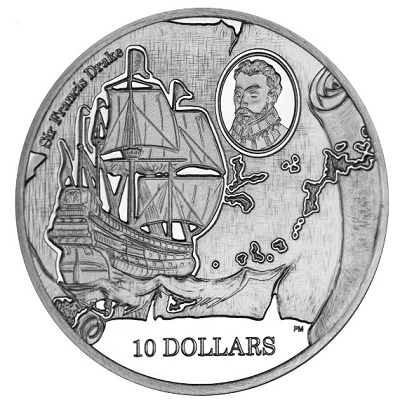 As captain of The Golden Hind, Drake was the first sea captain to pass from the Atlantic to the Pacific coasts of South America via Cape Horn, a waterway at the tip of the continent that now bears his name, the Drake Passage. From the coast of what is now Ecuador, it is thought Drake sailed as far north as California, to what is known today as Drake’s Bay. His extraordinary voyage continued across the vast Pacific Ocean, where he eventually landed on the small island of Palau, heading to Mindanao in the Philippines.

Drake sailed through the Molucca Sea, befriending the sultan king of the Moluccas along the way. From here, Drake headed for the Cape of Good Hope at the southern-most tip of Africa and north towards the coast of Sierra Leone. On September 26, 1580, the Golden Hind finally sailed into Plymouth with Drake and the 59 remaining crew aboard, along with a rich cargo of spices and captured Spanish treasures that included nearly 80 lbs. of gold, a golden crucifix, various pieces of jewelry, 13 chests full of silver reales, and 26 tons of silver.

For his exemplary service to the crown, along with her half-share of Drake’s Bounty — said to have equaled the income for the crown for the entire year — Elizabeth awarded Drake a knighthood, which she bestowed upon him aboard Golden Hind on April 4, 1581. Later that year, in September, Drake became the Mayor of Plymouth and also entered Parliament, possibly for the constituency of Camelford, and then for Bossiney in 1584, and Plymouth in 1593. Drake was also appointed Vice Admiral of the Navy in 1588, another pivotal chapter in his career.

Sir Francis is also remembered for defeating the Spanish Armada, a naval force deployed by the Spanish King Philip II, the former brother-in-law of Queen Elizabeth. The Armada sailed from the port of A Coruña in August of 1588 under the command of the Duke of Medina, Sidonia, with the purpose of escorting an army from Flanders to invade England.

During the Battle of Gravelines off the coast of Calais, English naval forces — made up of 34 warships and 163 armed merchant vessels — defeated the Spanish fleet of 130 ships, and over a third of the Armada was lost. This decisive Spanish defeat was said to have precipitated Spanish decline on the high seas and in the New World, paving the way for England’s undisputed rise as a naval and colonial power.

Now in his mid-fifties, Drake’s final seafaring expedition came in 1595, when he embarked on a voyage to the Caribbean on board The Defiance. He was sent back to the Americas to attack Spanish settlements in the West Indies. During the ensuing battles, he failed to conquer the port of Las Palmas. Following a disastrous campaign against Spanish America, where he suffered a number of defeats, he also unsuccessfully attacked San Juan de Puerto Rico, eventually losing the Battle of San Juan.

During one battle, Spanish gunners from El Morro Castle, located off the coast of San Juan, shot a cannonball through the cabin of Drake’s flagship,  an attack that he survived. However, a few weeks later in January of 1596, Sir Francis succumbed to dysentery while anchored off the coast of Portobello, Panama. He was about 55 years of age at the time of his death.

Following his death, the English fleet withdrew from the campaign. Before setting sail for England, Sir Francis was buried at sea in a lead coffin, near Portobello. Prior to his death, he asked to be dressed in his full armor. To this day, Divers continue to search for Drake’s coffin. Upon hearing of the news of Drake’s death, Queen Elizabeth I was said to have been quite shaken over the passing of her vice Admiral and friend.

The coin is struck by the Pobjoy Mint, UK, and features a map in the background of the British Virgin Islands, with an image of Drake’s ship, Defiance, heading through what is now known as the Sir Francis Drake Channel. A cameo portrait of Drake is also shown. The coin’s value of TEN DOLLARS appears below the primary design. The obverse of the coin carries an effigy of Queen Elizabeth II designed by Ian Rank-Broadley.

The coin is available in both Cupro-Nickel (BU) and Sterling Silver (Proof) versions; the precious metal version is struck four times to attain the highest quality finish. For more information about this and other coins issued from the Government of the British Virgin Islands, please visit the Web site of the Pobjoy Mint. Information is offered in English, with international orders dispatched where applicable.