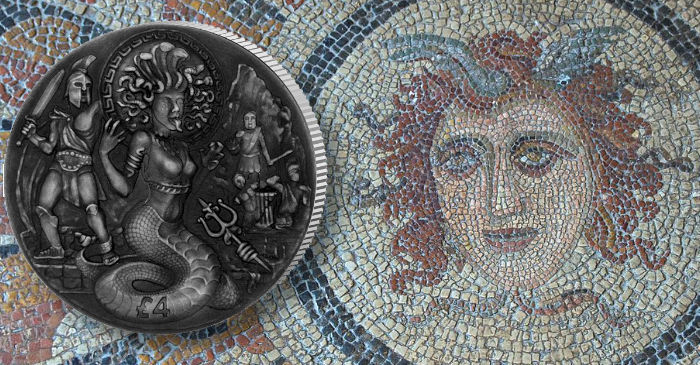 The government and treasury of the British Indian Ocean Territory have issued (14th September) the fourth coin which is part of the series entitled “Mythical Creatures” that features some of the world’s best-known stories and legends which originate from the myths of the ancient world of Greece and Rome. The latest coin in the series features the snake-headed Gorgon, Medusa, who struck fear into the hearts of many brave warriors that were turned to stone just upon a single gaze.

Her name is believed to derive from the ancient Greek word meaning “guardian.” She became one of the three Gorgons, or monsters, in Greek mythology. She was one of the daughters of the sea gods Phorcys and Ceto, and sisters of the Graeae, three sisters in Greek mythology who shared one eye and one tooth among them — one who was named Echidna, and the other who was named Ladon. All of Medusa’s siblings were monsters by birth, and, even though she was not, she had the misfortune of being turned into the most hideous of them all. Originally a beautiful young woman, Medusa’s crowning glory was her long hair, for which she was desired and courted by many suitors.

What were, in fact, her most alluring features (her face and hair) would also be her misfortune, since she attracted the attention of the great sea god Poseidon. He was so taken with the beautiful Medusa that he forgot his stately position and spirited her to the Temple of Athena where he ravished her. In Roman mythology, it is the god Neptune who becomes so entranced with Medusa. Enraged and jealous, the virgin goddess Athena was also angry that her sacred temple had been violated in such a way and transformed Medusa’s enchanting hair into a coil of serpents, turning her into the youngest Gorgon. As a result with her encounter with Poseidon, Medusa becomes pregnant with two offspring.

Simultaneously, while trying to get rid of Perseus, Polydectes, the king of Seriphos, sends the great hero on a quest which he believed would be his final one with his request of “fetching the head of Medusa.” With the help of Athena and Hermes, and after extracting the whereabouts of Medusa from the Graeae, Perseus finally reaches the fabled land of the Gorgons, thought to be located on the rocky island of Sarpedon. While Medusa was asleep, Perseus — so as to not look directly at the Gorgon and be turned into stone — uses the reflection from Athena’s bronze shield as a guide and manages to cut off her head with his sword. In a twist of fate only found in the myths of ancient Greece, her story doesn’t end with her demise — for Medusa was pregnant at the time of her death. When Perseus severed her head, Medusa’s two unborn children, Chrysaor and Pegasus, suddenly emerged from her neck. Awakened by the noise of the slaying of Medusa, the Gorgons do their best to avenge the death of her sister, but they could neither see nor catch Perseus, since he was protected by wearing Hades’ Cap of Invisibility and Hermes’ winged sandals. Defeated, the two remaining Gorgons retreat to their secluded habitat to mourn Medusa.

With the head of Medusa in his bag, Perseus uses the winged sandals of Hermes to return to Seriphos to prove his bravery to Polydectes and rescue his mother Danae from him. Spurned, Polydectes forces Danae to be his handmaiden, infuriating Perseus such that he sets out to avenge his mother’s mistreatment. Perseus storms to the palace and says, “Let all who are my friends shield their eyes!” As he raises Medusa’s head from his bag, resulting in Polydectes and his courtiers being immediately turned to stone.

The coins are produced by the Pobjoy Mint at their facilities in Surrey, on behalf of the treasury of the British Indian Ocean Territory. The reverse design on the coin shows Medusa surround by figures that have been turned into stone and Neptune’s trident, which can be seen in the surrounding water. The high relief and Antique finish effects on the coin bring this mythical character to life, emphasising the venomous snakes in place of her hair.

The obverse of each coin features an effigy of Her Majesty Queen Elizabeth II, which is an exclusive design from the Pobjoy Mint. The series, which will consist of five two-ounce fine silver coins, has been produced in high relief with each coin being applied an Antique finish by hand, thus bringing the amazing featured characters a greater depth of detail.

Each two-ounce fine silver coin has been produced in high relief, with each coin being finished with an oxidised process which creates the Antique look and brings the featured characters to life. Each coin is encased in a creative Perspex container in the shape of a square that frames the coin and allows for easy display. The frame is packaged in an outer printed sleeve and includes the certificate of authenticity. The last coins which complete this sought-after series will feature the Centaur and will be released before the end of 2018. For additional information about this coin and others issued by the treasury of the British Indian Ocean Territory, please visit the website of the Pobjoy Mint.