The government and treasury of the British Antarctic Territory have issued (14th July) a new coin which highlights one of the more extraordinary animal species inhabiting the waters around the islands: the Southern right whale (or Eubalaena australis, to offer its scientific name). These gentle creatures spend the summer in the far Southern Ocean in close proximity to Antarctica, where it feeds. In winter the species does migrate north, but some have been known to spend their winter in sub-Antarctic regions. The total population of the species is estimated to be around 10,000 individuals. 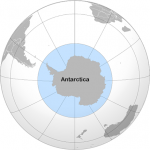 Habitat of the Southern right whale. (Image by the International Hydrographic Organization)

Southern right whales grow to become very large in size, and an adult female can measure up to 17 metres (55 feet) in length. The species is distinguished by broad backs with no dorsal fins and long, arching mouths. Individuals can be identified by the callouses formed on the head, which are as unique as fingerprints. Southern right whales form very strong maternal and family bonds; they are also known to follow patterned migration groups and return to birthing spots. They are very inquisitive when they emerge to the surface of the water and often approach and investigate boats. One particularly interesting behavioural trait which is unique to these whales is known as “tail sailing,” in which they elevate their tails from the water and curve them to catch the wind. They then remain in these vertical positions for extended periods of time as a kind of game.

The coin, which is minted in cupro-nickel and silver, is produced by the Pobjoy Mint, United Kingdom, on behalf of the government and treasury of the British Antarctic Territory. The reverse design features the Southern right whale just below the surface of the water. Behind the whale, a jagged coastline of ice and rock protrudes from the icy water which is the natural habitat of this majestic mammal. The denomination of TWO POUNDS is placed, in two lines, at the upper right.

The obverse features an effigy of HM Queen Elizabeth II which is an exclusive design to the Pobjoy Mint and depicted in exceptional detail.

The issue limit for this coin will be 10,000 in Uncirculated cupro-nickel and 2,000 in Proof sterling silver. The Uncirculated coin is shipped in a blue presentation pouch. The Proofs are placed in an acrylic capsule for protection and housed in a custom red presentation box with certificate of authenticity. Please visit the website of the Pobjoy Mint for additional information on this and other coins issued by the government and treasury of the British Antarctic Territory.   ❑