The Treasury of the British Antarctic Territory has issued a new coin which highlights one of the territory’s most distinctive and awesome wildlife, that of the Orca Whale, or more commonly known as Killer Whales. A toothed whale belonging to the oceanic dolphin family, they are the largest of the dolphins and one of the world’s most powerful predators. Although they can be found in waters from the Polar Regions to the Equator, they usually frequent cold coastal waters. It is therefore most appropriate that this stunning new coin is being issued on behalf of the British Antarctic Territory.

A typical Orca Whale distinctively bears a black back, white chest and sides and a white patch above and behind the eye. Calves are born with a yellowish or orange tint, which fades to white as they get older. Orca Whales are the largest existing members of the dolphin family with a male ranging from 6-8 meters or 20 to 26 feet long and weigh in excess of 6 tonnes. Killer whales are highly social with some populations being composed of matrilineal family groups which are the most stable of any animal species. Their sophisticated hunting techniques and vocal behaviors, which are often specific to a particular group and passed across generations, have been described as manifestations of actual culture. Orca whales are apex predators, meaning that they themselves have no natural predators. They are sometimes called the ‘wolves of the sea’ because they hunt in groups like wolf packs.

The International Union for Conservation of Nature (IUCN) currently assesses the Orca’s conservation status as data deficient because of the likelihood that two or more killer whale types are separate species. Some local populations are considered threatened or endangered due to prey depletion, habitat loss, pollution (by PCBs), capture for marine mammal parks, continued whaling by select Asian countries and conflicts with fisheries. In late 2005, the “southern resident” population of killer whales that inhabits British Columbia and Washington state waters were placed on the U.S. Endangered Species list. 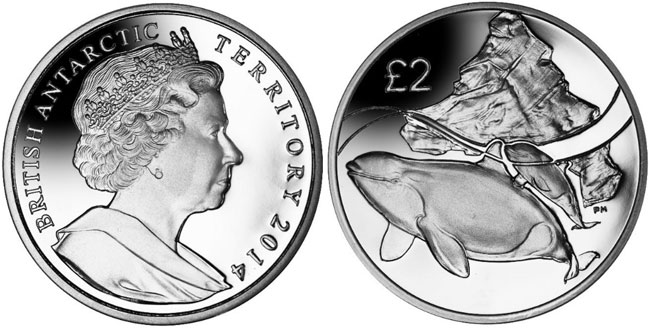 The coin is produced by the Pobjoy Mint UK, on behalf of the Treasury of the British Antarctic Territory. The design on the reverse of the coin shows an adult female Orca with her calf swimming in the Antarctic waters with an iceberg in the background. The obverse of the coin carries an effigy of Her Majesty Queen Elizabeth II by Ian Rank-Broadley FRBS.

Each precious metal coin has been carefully struck four times and features a frosted high relief sculpting against a mirror brilliant background. For more information on this and other coins offered by the Treasury of British Antarctic Territory, please visit the website of the Pobjoy Mint at: http://www.pobjoy.com/ukworld/section.php/968/1 Information offered in English, international orders dispatched.