Opening one hundred years after Captain Robert Falcon Scott’s Antarctic expeditions, the new state-of-the-art research facility demonstrates the UK’s ambition to remain at the forefront of scientific endeavor. Funded by the Natural Environment Research Council (NERC) and the Department of Business Innovation and Skills, the British Antarctic Survey’s (BAS) Halley VI Research Station, with its futuristic modular design, is set to become an icon for British science, architecture and engineering. The new research station replaces the 20-year old Halley V facility and is the sixth to be built on the floating Brunt Ice Shelf. The first station, which became operational in 1957 for a Royal Society expedition during the International Geophysical Year, established the region as an important natural laboratory for studying the Earth’s magnetic field and the near-space atmosphere. It was data from Halley that led to the 1985 BAS discovery of the ozone hole. 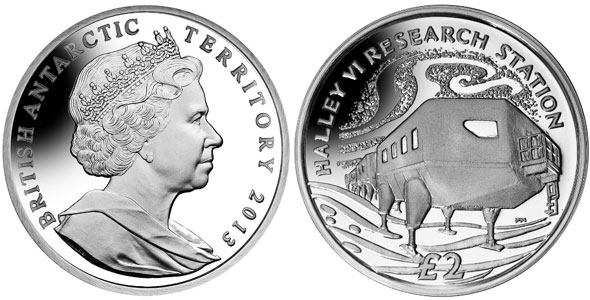 The coins, struck by the Pobjoy Mint UK on behalf of the British Antarctic Territory, feature a design of Halley VI underneath the Aurora Australia on the reverse. The actual structure which is made up of a string of 8 modules is raised up on stilts to keep it above the accumulation of snow. There are skis on the bottom of these legs which allows the building to be relocated periodically. The obverse includes an effigy of Her Majesty Queen Elizabeth II by Ian Rank-Broadley FRBS. The text “BRITISH ANTARCTIC TERRITORY 2013” surrounds the Queen’s portrait.

Both coins carry the same denomination and design. For more information on this and other coins issued by the treasury of the British Antarctic Territory, please visit the website of the Pobjoy Mint at: http://www.pobjoy.com/ukworld/section.php/1054/1 Information offered in English, International orders fulfilled.