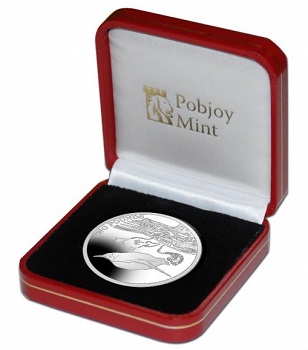 The Treasury of the British Antarctic Territory has launched (February 1) their second 2016-dated crown. This latest design features the Emperor Penguin and has been issued in three versions: a unique collector’s issue made of blue titanium, a Proof sterling silver piece, and Uncirculated cupro nickel coin.

Indigenous and unique to the Antarctic continent and surrounding islands and coasts, the emperor penguin, or Aptenodytes Forsteri, are truly beautiful (though flightless) birds, and are the tallest and heaviest of all penguin species. On average, they measure 115 cm (about three feet) in height, which is the height of the average six-year-old human.

Emperor penguins are also the only bird to inhabit the open ice of Antarctica during the winter, trekking 30 to 75 miles or (50 to 120 kilometers) over the ice to breeding colonies. They spend their entire lives in Antarctica, where the temperatures can drop to as low as -60°C. These brilliant birds have special adaptations to survive in such low temperatures, with their large stores of insulating body fat and several layers of scale-like feathers that protect them from icy winds; they also huddle close together in large groups to keep themselves and each other warm.

The male and female are similar in plumage and size, with black dorsal sides and head, a white belly, pale yellow breast, and bright yellow ear patches. While the female lays a single egg each season, both mother and father take turns incubating the egg while the other returns to the sea to feed. The female carefully passes the egg to the male before journeying up to 50 miles (80 km) to the open ocean where she can feed. During this time, the males are in charge of keeping the egg safe and warm in the breeding ground. They do this by balancing the egg on their feet and covering it with feathered skin called a ‘brood pouch.’ It takes about two months for the eggs to hatch. 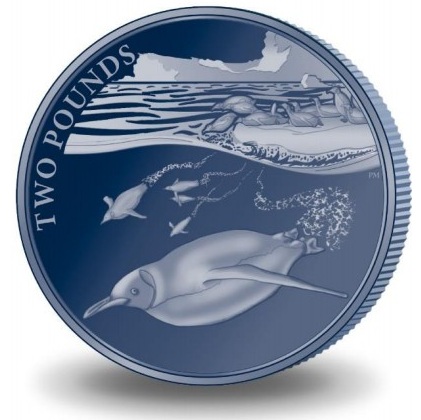 The coins are produced by the Pobjoy Mint UK on behalf of the Treasury of the British Antarctic Territory, whose reverse design features a group of emperor penguins swimming in Antarctic waters, with other penguins sliding into the ocean from an ice pack. 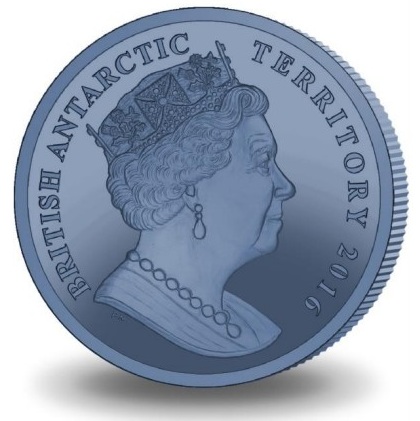 The obverse of each coin carries a recently introduced effigy of Her Majesty Queen Elizabeth II which is exclusive to the Pobjoy Mint. The year of issue is also included on the obverse.

The coins are available in Uncirculated cupro nickel, colored titanium, and Proof Sterling Silver, all sharing the denomination of two pounds. Each precious metal coin is struck four times to produce a pristine Proof finish. The cupro nickel coin is presented and packaged in a branded blue presentation pouch. The titanium and silver versions are available separately; they are encapsulated in an acrylic capsule for protection and housed in a custom red box, accompanied by a certificate of authenticity.

Titanium is exceptionally difficult to strike and, because of the way the colored titanium reacts when striking, no coin is exactly the same. There is also a lined patterned effect present on the coins, which is unique to this metal. For more information on this and other coins issued by the Treasury of the British Antarctic Territory, please visit the Web site of the Pobjoy Mint. International orders will be dispatched where applicable.