The Royal Mint have announced the launch of the 2014 range of Britannia gold and silver proof coins which feature a new depiction of the mythological national figure. Two new denominations have been added which at at only 1/40th ounce measurements are among the smallest and lightest bullion related coins to hit the market. The Royal Mint are marketing these 2014 additions as “the smallest coin minted in the UK since the Norman Conquests.” 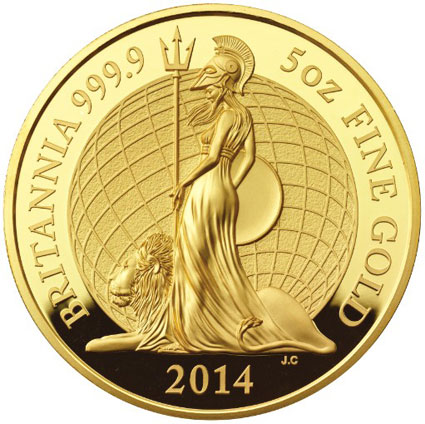 Britannia first appeared on Roman coins about 2,000 years ago, and since then has evolved to represent the strengths and challenges of Britain, from queen of the seas on the copper coins of George III to the warrior seen on the pennies of George IV and through the change brought about by decimalization when she graced Christopher Ironside’s famous 50p. Britannia returns in 2014 re-imagined in a stunning contemporary reverse design.

The extraordinary popularity of the gold and silver Britannias prompted the Royal Mint to issue and create differing reverse designs for the national allegorical figure which has undergone many styles and depictions, the 2014-dated coins are the latest and will stand out as one of the more innovative and artistic designs. 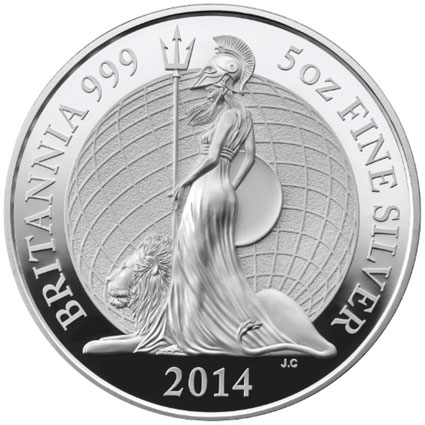 Following on the immense success of the Grecian style depiction of a seated Britannia last year – the work of Robert Hunt, this year’s depiction sees a standing Britannia in definable art-deco style in front of a three-dimensional globe accompanied by a lion, its tail draped protectively around her feet – symbolizing the reach of the once mighty British empire and its once indisputable lead in naval power.

The obverse shows the now familiar portrait of HM Queen Elizabeth II as created by Ian Rank-Broadley and in use for both circulation and several commemorative coins on British & many commonwealth countries since 1998.

The Britannia collection for 2014 is being launched in July with a choice of individual coins and sets. This will be followed by the release on an individual basis of the Fortieth-Ounce coin in September. Each coin is housed in a distinguished Royal Mint case, tailored to each coin or set, complemented by a booklet that reveals Britannia’s story and the inspiration behind the design. A Certificate of Authenticity will accompany the chosen item, confirming that it is part of a limited presentation. 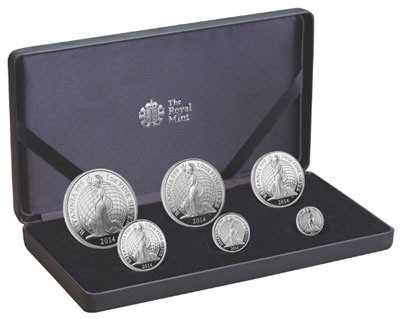 For information or to order the new 2014 Britannia Gold and Silver Proof Coins, please visit this section of the Royal Mint website. Information offered in English – international orders dispatched.