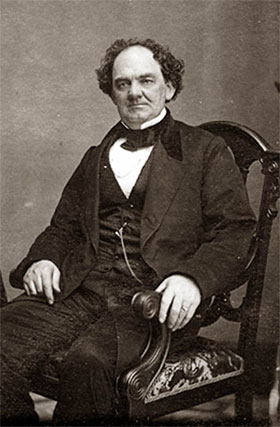 In our article series covering early commemorative coins, we have reached one of the more local issues, the 1936 Bridgeport, Connecticut Centennial Half Dollar. Bridgeport is not exactly the most famous of American cities (even though it is the most populated city of Connecticut), yet the occasion of the 100th anniversary of the incorporation of the city was marked with a commemorative coin bearing the image of its most famous citizen (and one time mayor), P.T. Barnum.

Phineas Taylor Barnum no doubt was one of the most famous and enigmatic showmen of the 19th century. Born July 5, 1810 in Bethel, Connecticut, he lived a life best remembered by the circuses he led, the hoaxes he created and a phrase that is said to have come from him, but is now believed to have been about him (“There’s a sucker born every minute”, referring to the many people he swindled). Combine it with jobs such as author, publisher, mayor and philanthropist and we have a man whose life we can write so much about that it would be way behind the scope of this article. Yet, his image still appeared on a United States coin, and a general introduction to Barnum is certainly appropriate.

While still in his teens Barnum started working as a store-keeper, and even though the haggling and deception skills he learned in that position would become useful later on in his career, it wasn’t a job he held for long. Besides, he was busy exploring other enterprises, including a lottery, real estate, books and at age 19, a newspaper. Through this newspaper he would attract the first attention, being the editor of numerous liberal articles, opposing those that believed in restriction of gambling and the like. But these were just humble beginnings, and at age 25 he discovered what would become his lifelong profession: showman.

His first act as a showman (and his first deception, as it later turned out) was the purchase of an elderly slave. In his show where he displayed her, Barnum claimed that the woman had been George Washington’s nurse, and that she had reached the incredible age of 160 years old. When Joice Heth, as the woman would become known died the next year, it turned out that she was only 80 years old, and that Barnum had produced the false age to attract attention for his own personal gain.

There would be many more hoaxes at his circus over the years. After Ms Heth was “Feejee” the mermaid, with the head of a monkey and the tail of a fish. Then there was perhaps the most famous of his hoaxes, a dwarf named “General Tom Thumb”, who was eleven years old when first hired by Barnum. When exhibited it was claimed that Charles Stratton (his real name) was just four years old, and his impersonations of famous people became known around the world. Even though it was based on a lie, it did make both Barnum as well as Stratton wealthy and famous men.

In his early 60’s, Barnum purchased a circus after having been involved in more hoaxes, books and politics. In the 1870’s his first wife died while on a trip to Europe and he married a European woman who was the daughter of an old friend just over three months later (he was almost 40 years her senior). He also became the mayor of Bridgeport for one year, in 1875, working to improve a number of laws as well as the local water supply. He also was the president of a hospital he founded in Bridgeport and throughout the 1880s worked on a number of charitable causes, including the newly founded Tufts University. After a life of hard work, Barnum passed away on April 7, 1891 at the age of 80. 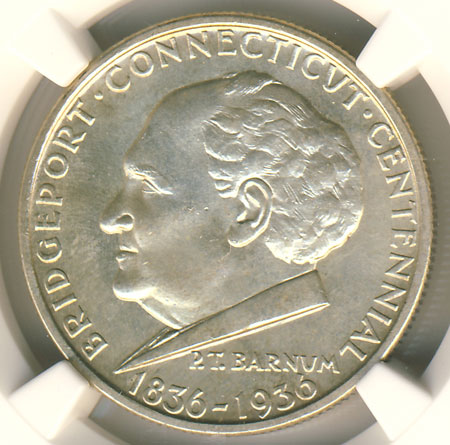 A portrait of P.T. Barnum, facing to the viewer’s left, appears on the obverse of the 1936 Bridgeport Centennial Commemorative Half Dollar. Around him are the words “BRIDGEPORT CONNECTICUT CENTENNIAL”, with large dots separating the words. Below the truncation of the bust is “P.T. BARNUM”, with the dual dates “1836-1936” appearing at the bottom. 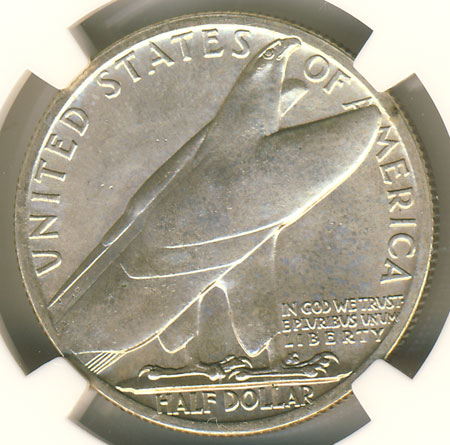 The reverse features a very stylistic and modernistic eagle, appearing as it is about to set off in flight. Around the eagle is UNITED STATES OF AMERICA, with part of the first A and M in AMERICA obscured by the eagle’s right wing. In front of his right claw is (in three lines) IN GOD WE TRUST / E PLURIBUS UNUM / LIBERTY. Below the eagle is the denomination, HALF DOLLAR. Henry G. Kreiss, whose initial “K” in the lower right part of the reverse, designed the coin.

The act of May 15, 1936 authorized this commemorative issue, with a minimum of 25,000 to be produced, but no set maximum. The Philadelphia Mint did indeed strike 25,000 pieces in 1936, but Bridgeport Centennial, Inc, official distributors of the issue had a hard time selling all the coins for the official issue price of $2 a piece. Like many other commemoratives of the era it would take several decades before all coins had finally been released into the market.

The Bridgeport Centennial Half Dollar is now considered to be one of the more available of the classic commemoratives. The issue is relatively affordable in all grades up to MS-66, although true MS-67 certified examples are much scarcer, thanks in part to the open areas of the design, particularly so on the eagle, which is very prone to bagmarks and the like. As most coins were distributed through local banks (where a limit of 5 coins per person was enforced) finding nicely toned and fully original pieces is more difficult than one might expect, and the majority of pieces in the marketplace are white or only show moderate toning around the periphery acquired at a later time in perhaps an album or envelope of some sort.