The finest certified 1787 Brasher Doubloon will be displayed by Monaco Rare Coins of Newport Beach, California (www.MonacoRareCoins.com) as the centerpiece of the official Museum Showcase exhibits at the American Numismatic Association 2014 Chicago World’s Fair of Money (www.WorldsFairOfMoney.com), August 5 – 9, 2014. 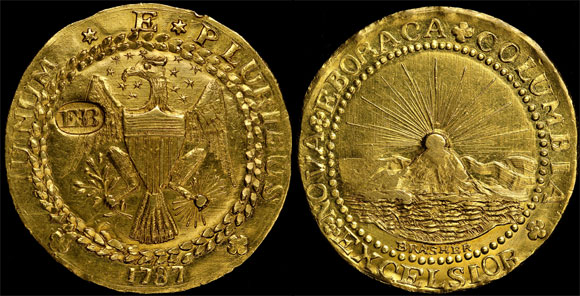 Graded NGC MS63 CAC, it will be insured for $10 million for the exhibition, the first since Monaco acquired the coin this past January and only this coin’s second public display the past quarter century.

The Brasher Doubloon has been described as one of the greatest numismatic rarities of the world. Made 227 years ago by New York City gold and silversmith Ephraim Brasher, it is one of only seven known surviving examples of the first gold made for the young United States. Brasher’s initials, EB, are punched on the wing of an eagle on the coin’s obverse. 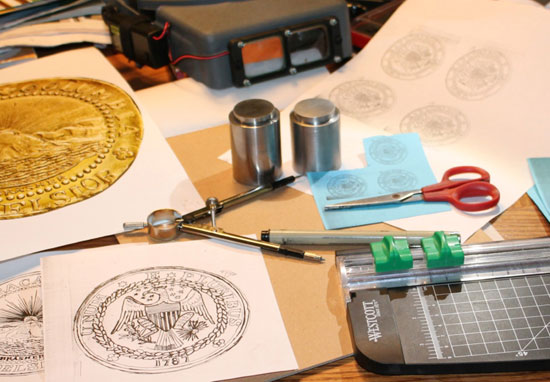 Some of the tools and designs used by engraver Ron Landis to prepare dies for the Brasher Doubloon novodel. Photo: Ron Landis

“Novodels of the Brasher Doubloon have been commissioned by Monaco Rare Coins to be struck in .999 fine gold by the Gallery Mint on the ANA convention floor. Master Engraver Ron Landis will actually be minting the coins with a hand-operated screw press and educating attendees on the process used to create these important pieces of Americana two centuries ago,” said Monaco Vice President Adam Crum.

A novodel is a coin struck from new dies that are backdated; in this case, 1787.

“A portion of the proceeds from sales of the Brasher Doubloon novodels will be donated to the ANA by Monaco. We have a goal in mind to donate $250,000 to the ANA for many important projects the association is seeking to fund in the coming years. My hope is that our membership will enjoy these fun novodels and see them as an important resource to educate collectors about significant rarities that enhance our hobby,” explained Crum. 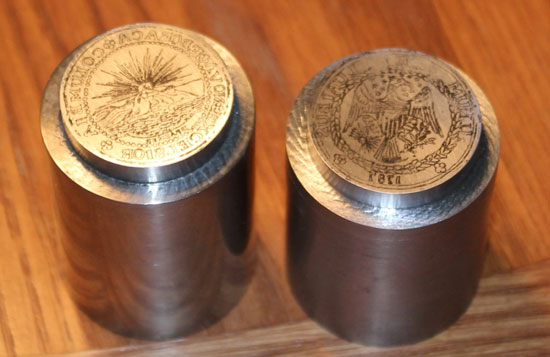 A drawing of the Brasher Doubloon novodel design was placed on each die prior to engraving by Ron Landis. Photo: Ron Landis

The upcoming exhibit will be this Brasher Doubloon’s first major public appearance in the Chicago area in 27 years. It’s last formal public display in the Midwest was in 1987 when it was part of a nationwide traveling exhibit commemorating the bicentennial of the United States Constitution. The coin was also displayed at the 1964 World’s Fair in New York City and at the 2012 ANA convention in Philadelphia.

“This coin is an iconic national treasure that should be seen, and the upcoming display in Chicago will be the first of several cross-country exhibits that are being planned,” explained Crum.

“This is our country’s first gold coin, struck in the infancy of the United States with a purely American design,” said Mark Salzberg, NGC Chairman. “The Brasher Doubloon is one of the most sought-after coins in existence and this example is likely the most important coin ever certified.”

The Brasher Doubloon going on display at the ANA convention weighs 26.4 grams and is .890 fine gold.

“The novodels will be the same weight as the original, but have the beautiful rich color of solid pure .999 fine gold,” said Landis.

“We will have scheduled demonstrations during the ANA convention to show how the they are made. There is a lot of hand crafting that will go into the making of the blanks, hand chasing the edge, striking and finally, adding the oval ‘EB’ stamp after the coin is struck in the screw press,” Landis explained.

Visitors to the ANA Museum Showcase exhibit (booth area #143) and the Monaco booth (#139) can obtain a complimentary, illustrated educational brochure about the Brasher Doubloon.

The obverse design of the Brasher Doubloon shows an eagle holding an olive branch in one claw and arrows in another to symbolize the United States wants peace but is ready for war. There are 13 stars around the eagle’s head representing the original 13 colonies, and the obverse motto is E PLURIBUS UNUM (“Out of Many, One,”). The “EB” punch mark is on the wing on the left side of the coin.

The reverse design is a sun rising over a mountain in front of a sea, a symbolic representation of a new beginning. Around the design is another Latin legend, NOVA EBORACA COLUMBIA EXCELSIOR. Columbia was a nickname for the United States, Nova Eboraca translates to New York and excelsior is Latin for “ever higher.”

In addition to his punch marked initials on the obverse, Brasher’s full last name is on the reverse. Besides his work as a respected gold and silversmith, Brasher served in various political and government jobs of the day in New York and was a neighbor of George Washington on Cherry Street in lower Manhattan.

In a 1922 auction catalog description of this coin, Fort Worth, Texas dealer B. Max Mehl stated: “For historical interest and numismatic rarity, this great coin is second to none. It is rightfully recognized as one of the greatest numismatic rarities of the world.”

The fabled Brasher Doubloon was the subject of a 1942 Raymond Chandler novel, “The High Window,” and a subsequent 1947 movie, “The Brasher Doubloon,” based on Chandler’s story about fictional detective, Philip Marlowe.

A video and detailed information about the history of Brasher Doubloons can be found online atwww.MonacoRareCoins.com/BrasherVideo.