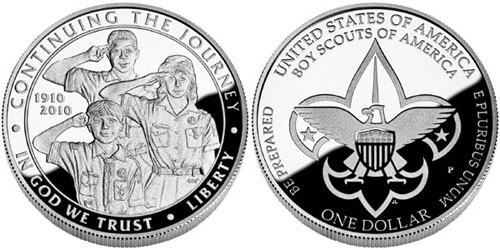 The obverse of the silver dollar features a Cub Scout, Boy Scout, and female Venturer saluting, with the inscription “Continuing the Journey”. According to the US Mint, “The Venturer represents how the Boy Scouts of America organization has evolved over the past century to serve all the youth of America, including girls.” The reverse of the coin features the organization’s universal emblem.

The obverse was designed by US Mint Artistic Infusion Program Master Designer Donna Weaver. Both the obverse and reverse of the coin were sculpted by US Mint Sculptor-Engraver Charles L. Vickers.

Both proof and uncirculated versions of the Boy Scouts Silver Dollar are available. Proof coins feature a mirror like background with frosted design elements to create a cameo effect. Uncirculated coins feature a uniform satin-like finish. A maximum mintage of 350,000 coins has been set across both product options.

Generally, United States Mint commemorative coins remain available until the maximum authorized mintage has been sold, or until a pre-announced sales cut-off date in December.

As provided by the authorizing legislation, surcharges from the sale of the Boy Scouts Silver Dollars will be distributed to the National Boy Scouts of America Foundation. These funds will be made available to local councils for the extension of Scouting to hard-to-serve areas.