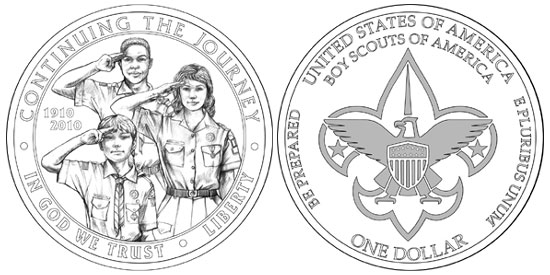 Under the authorizing legislation, designs for the Boy Scouts Commemorative Coin are intended to be “emblematic of 100 years of the largest youth organization in the United States, the Boy Scouts of America.”

The obverse design of the 2010 Boy Scouts Silver Dollar features an image of a Cub Scout, Boy Scout, and female Venturer saluting. The centennial dates “1910” and “2010” are to the right of the image. Inscriptions within a circle around the rim of the coin read “Continuing the Journey”, “In God We Trust”, and “Liberty”. The obverse was designed by Artistic Infusion Program Master Designer Donna Weaver and engraved by US Mint Sculptor-Engraver Charles Vickers.

The Boy Scouts coins will be stuck in 90% silver and 10% copper with a face value of $1. The coins will be offered in uncirculated and proof qualities with US Mint sales beginning on or after February 8, 2010 and continuing until the end of the year or until the maximum authorized mintage of 350,000 coins has been sold.

A $10 surcharge will be added to the price of each coin, which will be distributed to the National Boy Scouts of America Foundation. These funds will be made available to local councils in the form of grans for the extension of scouting in hard to serve areas.