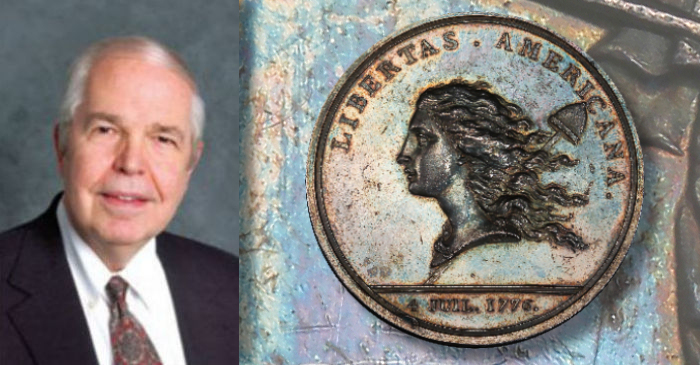 Apropos of this, I reprint the introduction (lightly edited) to my 2007 book, 100 Greatest American Medals and Tokens. Katherine Jaeger was co-author.

If you are seeking a new field of interest, give this a try! 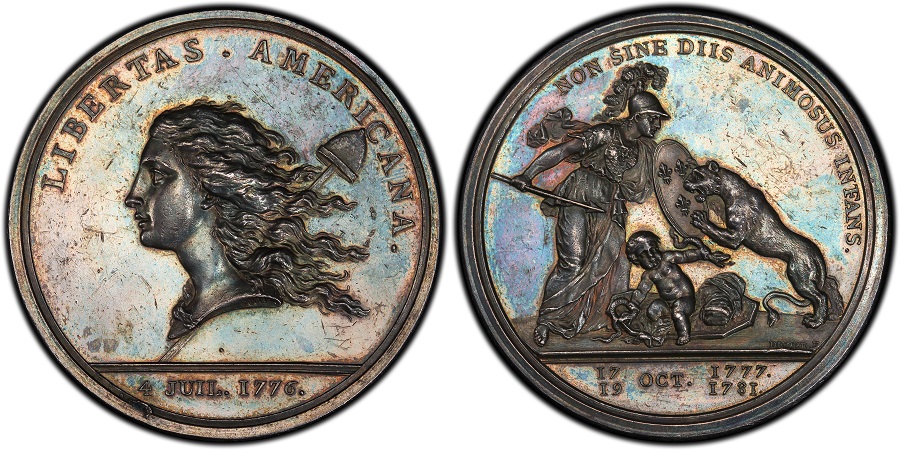 Welcome to The 100 Greatest American Tokens and Medals. For both of us, the creation of this book has been an incredible journey, leading us on to many interesting and sometimes obscure paths and byways seeking information on the items listed. The arrangement, in order from No. 1, the greatest, to No. 100, which brought up the rear, is the result of an extensive survey taken by Whitman Publishing, LLC. among collectors, writers, and dealers in the field of tokens and medals—what foreword-writer Russell Rulau dubbed exonumia many years ago, and the name has stuck.

What is a token? What is a medal? Kenneth Bressett, long-time editor of A Guide Book of United States Coins and always a good source for consultation, suggests that, for starters, coins are metal pieces “issued by a government or other authority to serve in commerce as money.” Tokens are “issued by entities other than governments, but have a value in exchange—for goods or services.”

Medals form a separate challenge, and it seems that in checking around, definitions suggested by well-known experts can vary widely. Medals and their little cousins, medalets, might be, per our thoughts, created for awards, commemoration, recognition, tradition, etc., with no exchange value of any kind. Medals did not circulate. They were usually sold as souvenirs or mementos and are usually seen today in Mint State grade or close or in Proof format.

A medalet or small medal has a rich tradition. Political campaign medalets sized mostly below 29 mm were struck in quantity beginning in the 1830s. In the 1850s, George H. Lovett and Augustus B. Sage called certain of their 31 mm (approximately) pieces medalets, such as in the Masonic Medalets series. Perhaps a medalet should be a medal measuring 32 mm or smaller. We’ll leave it up to numismatic lexicographers to decide.

Some contributors suggested that tokens are tokens and medals are medals, and never the twain should meet. This defies tradition, however. For a long time—indeed back to the cradle days of numismatic auctions in the 1850s and 1860s—they were usually collected by the same specialists. Someone interested in political medals usually finds Hard Times tokens to be interesting, and whether certain of the medalets of the late 1850s should be called tokens, medals, or medalets admits of various opinions. Perhaps the name of the Token and Medal Society (TAMS) says it all. R.W. Julian, in the introduction to Medals of the United States Mint: The First Century 1792-1892, reminds us that exonumists “are those who collect tokens and medals.” Now on to the voting results:

To have suggested that the greatest tokens and medals are those with the highest market values would have been an insult to history and art, simply a nod to the commercial arena of the moment, which might be different a generation from now. To have suggested that the greatest pieces are the rarest would have been a similar discredit—rarity really says little about the importance of a token or medal.

Instead, voters determined the greatest based upon their own opinions of combined historical importance, numismatic tradition, artistry, utility, and other aspects. Certainly, rarity and value attract a lot of attention as part of the numismatic tradition. Compiled by Whitman and given to the authors, the thousands of votes yielded an incredible spectrum of diverse issues. Of course, diversity defines tokens and medals. Unlike federal coins, which can often be a long run of essentially the same designs, differing only by date or mintmark, there are few similarities among the pieces showcased in this book. An 1800 Washington funeral medal with HE IS IN GLORY, THE WORLD IN TEARS (No. 11) bears little relation to a token showing a horse-drawn car on the New York & Harlem Rail Road (No. 85), or the elegant Winfield Scott medal by Charles Cushing Wright, featuring on the reverse several dioramas of battles of the War with Mexico (No. 62). The unique gold medal by Wright, presented by Congress to President Zachary Taylor, was unknown to numismatists until September 2006, by which time the voting had been concluded. We can readily imagine that it would have placed high in the voting otherwise. An accompanying page in our narrative commentary illustrates this magnificent medal and tells its story.

The writers guessed that the Libertas Americana medal might land in the No. 1 spot, and it did. We thought that the Washington Before Boston medal, if shooed out of first place, would capture No. 2, and it did. Beyond that, there were many surprises. Some favorites were left at the starting gate, but are listed in the “What Might Have Been” appendix. Others were numismatic dark horses, at least to us, that finished in the money—this list is a long one and includes, of all things, 1944 O.P.A. ration tokens (No. 81) and an elongated nickel from the World’s Columbian Exposition (No. 94).

While most of the 100 finalists are well known, some required some looking-up to learn the basics—such as the “1776” Washington / Column Indian Peace medal (No. 95) and several of the Betts-listed issues as the 1746 Annapolis Tuesday Club medal (No. 80) and the Sir Francis Drake medal commemorating his circumnavigation the globe (No. 99). The appearance on the auction market of the Lucien LaRiviere Collection of early medals a few years ago (mostly catalogued by John Kraljevich) and the more recent and incredible cabinet of John Jay Ford, Jr. (mostly cataloged by Michael Hodder), as well as other significant properties, have focused a lot of attention on early Betts medals as well as other pieces that have been numismatic esoterica for a long time—the 1817 Amelia Island “Green Cross” medal (No. 76) is but one of many examples.

The listing of certain pieces in the Guide Book of United States Coins has no doubt aided greatly in the popularity and recognition of certain issues. We surmise that otherwise the North West Company “Beaver” token (No. 12), Lesher “dollars” (No. 18), and the Albany Church penny (No. 37) may not have made it into the winners’ circle. Who knows?

Likely, American Numismatics Before the Civil War (Bowers, 1998), the growing interest in the history of our hobby by members of the Numismatic Bibliomania Society, and the American Numismatic Society’s forming the Augustus B. Sage Society (2005) resulted in many votes for Sage’s token depicting early numismatist Charles I. Bushnell (No. 58) and for Sage’s own store cards (No. 98).

The Token and Medal Society founded in 1960, the Civil War Token Society (1967), the Medal Collectors of America (1998), and the recent National Token Collectors of America have provided venues for the discussion of current events, the sharing of research, and simple old-fashioned camaraderie, making the study and acquisition of such pieces more fun than ever. Specialized reference books have aided the hobby as have computer databases and instant Internet searches and communications.

Like the selections published in 100 Greatest American Currency Notes (Bowers-Sundman, 2005), the winners in The 100 Greatest Medals and Tokens include many pieces that are available to collectors with modest budgets. Part of this is due to this field being a numismatic byway, rather than the road most often taken. It takes some connoisseurship and knowledge to buy a Hard Times token, or a Civil War cent, or a Theodor Bollenhagen game counter—quite unlike the scenario for federal coins in which much buying and selling are done by people who have little knowledge beyond the current market price and certified grade.

Rarity is a key word for most of the 100 Greatest, even for the majority of inexpensive issues—not rarity in the sense that only a handful are known, but rarity in comparison to federal coins. A Wealth of the South token in Mint State is rare, with fewer than a hundred or so Mint State examples existing of any variety. A population in the dozens is more likely. Such a token might command the best part of $1,000 if a gem. An 1893-S Morgan silver dollar, of which perhaps 50 to 75 Mint State examples exist plus 10,000 or so worn pieces, would bring perhaps $500,000 at auction if it were a gem. Morgan dollars are more popular than Wealth of the South tokens, of course, but still, it is evident that these tokens, as well as many others, offer much numismatic value for the prices paid. In recent years, more than just a few unique Civil War token varieties have traded for $500 to $1,000, although, of course, some with especially interesting characteristics have sold for far more.

Although each of us has a good background in history and research, while writing this book we learned many things. In some cases, conventional numismatic wisdom yielded to new information, such as with the Manly medal (No. 17), whose portrait attribution has been incorrectly stated for many years, and the Truxtun medal (No. 91). For many others, mysteries remain. We don’t know who coined the Feuchtwanger cents (No. 4), whether the 1793-5 Ricketts’ Circus token (No. 23) was struck at the Philadelphia Mint (where the dies were found some years later), or how the Carolina and New England Elephant coppers (No. 30) were distributed. The backgrounds and histories of the New Yorke in America token (No. 25), Gloucester token (No. 33), circa 1785 Bar copper (No. 39), and 1778-9 Rhode Island ship token (No. 50) are shrouded in mystery, perhaps adding to their appeal. No. 95 (look it up!) has never been illustrated before, to our knowledge, but not much is known about it, including the identity of its engraver.

There are many pleasures in life including, for some, the enjoyment mentioned on No. 63 among the 100 Greatest. It is the hope of the authors that this book will be a pleasure to own and read and will illuminate one of the most fascinating areas of American numismatics.