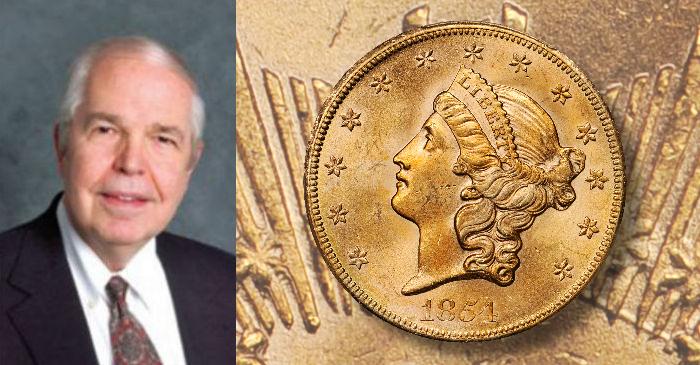 This week I share some comments from my 2002 book on the S.S. Central America. That was 18 years ago, but in some ways, it seems like yesterday:

The San Francisco Mint, which opened for business in spring 1854, plays a central role in the saga of the S.S. Central America, as the majority of coins recovered from that ship are double eagles bearing “S” mintmarks, including for all years 1854 through 1857. Among the latest-dated 1857-S coins, nearly all are in full Mint State, and some challenge the definition of perfection.

Description of the New Mint

The Sacramento Union, January 11, 1854, gave a view of the San Francisco Mint facilities, then in the process of being completed:

The California Mint will be ready for delivery to the government in February. It will be capable of coining $100,000,000 per annum. The machinery is of the most approved style and finish, and the house adapted in every respect to receive and sustain the weight and force exerted by the working of the powerful engine which impels it. It will be proof against thieves and fire.

There are three tubular boilers, eight feet long by four feet diameter. The bed-plate of the engine is solid iron, and weighs about four and a quarter tons. The fly wheel is 15 feet in diameter and of great weight. The engine is 55 horse power.[1] The machinery is represented as the most perfect that could be made. The press for striking the coin exerts a pressure of many tons, and turns out 76 coins per minute. In coining double eagles, it will turn out $90,000 per hour.[2] The Mint will be perfect in all its appointments for assaying, refining, and in all other particulars, for coining gold and silver of every denomination. . .

A Preview Tour of the Mint

On March 28, 1854, the Alta California included this about the new facility, then on the verge of opening:[3]

[After gold is refined and made into ingots or bars, the bars are made thinner by running them through a rolling mill.] The bar, not quite so thick as the coin, is taken thence to the cutting machine, which, by a punch cuts out from the bar round pieces. . . These pieces are called blanks.[4] The blanks are carried to the Annealing Room and washed with soap and water. They are then taken to the Adjusting Room. Here each blank is weighed separately, and made the exact weight for the coin. If too heavy, the blank is filed down; if too light, it is thrown into a box to be remelted. The work in this room is done entirely by ladies.

The adjusted blanks are run through the milling machine, which compresses the blank to the exact diameter of the coin and raises the edge. The purpose of making the edge thicker is to make the coin pile neatly, to protect the figures, and to improve the general appearance. About 250 blanks are milled in a minute.

The milled blanks are carried back to the Annealing Room, placed in an airtight cast iron box and placed in the furnace to be annealed, so that they may take the impression well. When they are at a cherry red they are taken out and poured immediately into water with a little sulfuric acid. This softens and cleans the gold. The blanks are taken out, washed with cold water, put into hot water again, taken out, mixed in with sawdust, which is then sifted off and the blanks are dry and perfectly clean.

They are again taken to the Coining and Milling Room and stamped. The coining machine is elegant and massive. The blanks are placed in a tube or pipe, and from this the machine takes them one by one, puts them between dies, stamps them, throws them out of the die and carries them down in a box.

They are then delivered to the treasurer and are ready for circulation. Such are the main features of the process. . . The difference between the United States coin [made at the Philadelphia Mint] and the California coin is that the latter is alloyed with silver, the former with copper. The California gold contains a good deal of silver, and it is troublesome and expensive to separate it from the gold; besides, it is more difficult to make a copper than a silver alloy. The California coin being one-tenth silver, is worth more than the United States coin, and a premium is paid for it at the United States mints. There is about 75¢ worth of silver in $100 of California gold coin. The copper is a much better alloy, being harder, more durable and more beautiful.[5]

All the machinery is of the best quality, having been manufactured under the supervision of George Eckfeldt, of the Philadelphia Mint. 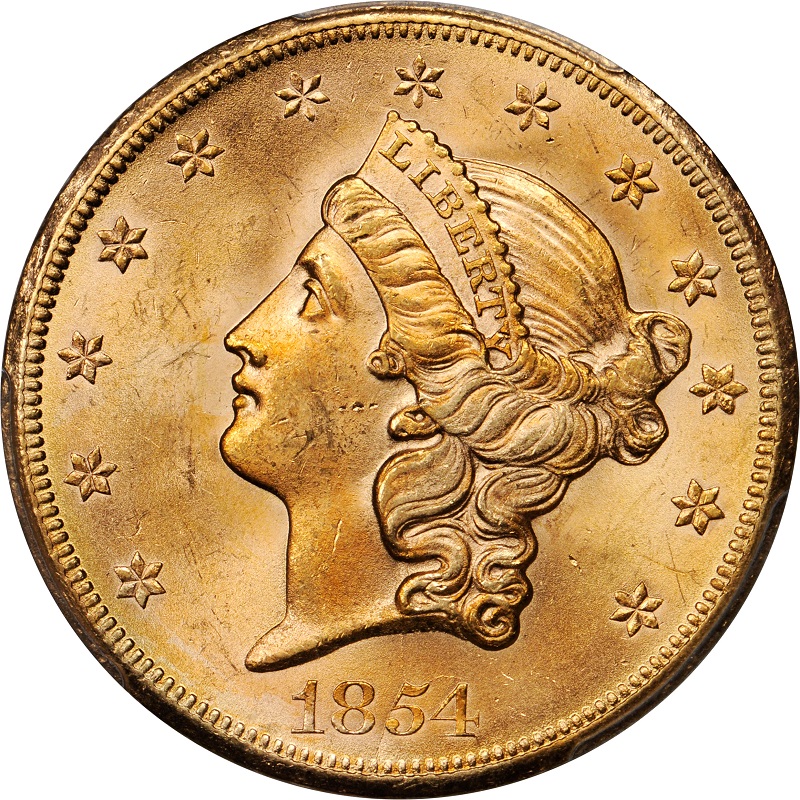 The first 1854-dated coinage dies shipped from the Philadelphia Mint arrived in San Francisco on March 15, 1854, along with some supplemental machinery. By the end of the same month, the staff positions had been filled, including over a dozen ladies who were to adjust the weights of gold coin planchets by placing them on scales and filing away any excess metal. Close to 70 people were employed on opening day. 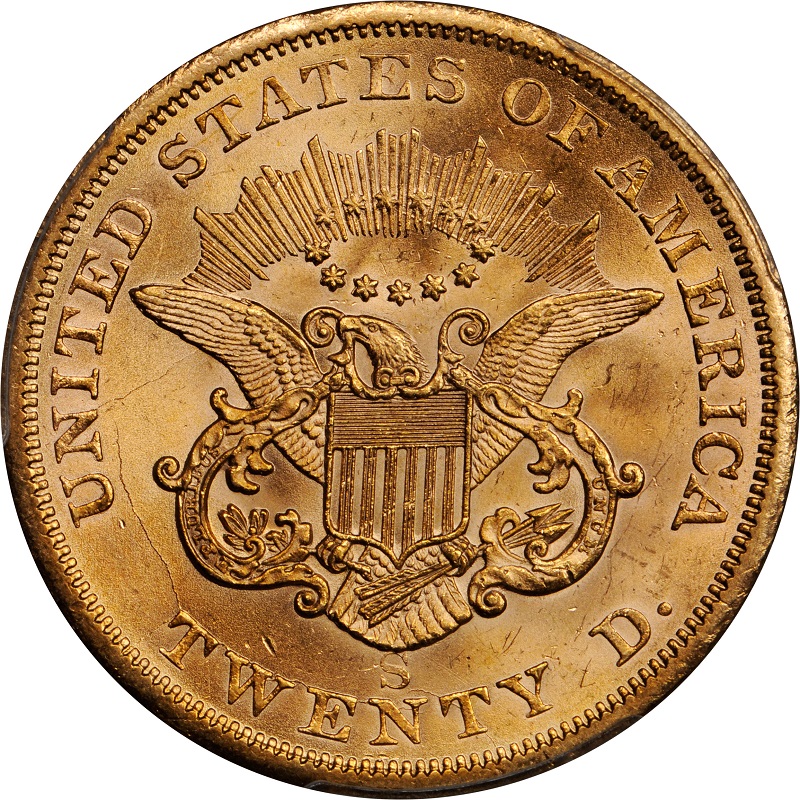 On April 3 the first deposit of gold was received. On April 15th the first coins were struck, double eagles of the federal design with a distinctive “S” mintmark. Superintendent Lewis A. Birdsall sent the first one, a glittering brilliant mirror-surface Proof, to Philadelphia for the Mint Cabinet.

From the outset, the new mint emphasized the coinage of gold. After this year the Philadelphia Mint, which had considered California gold a nuisance, was relieved of large amounts of coinage of this metal. In general, gold coins from California metal were struck at San Francisco while quantities of unparted gold to be refined into high-quality bars were shipped to the New York City Assay Office, which also opened that year.

The first delivery of coins bearing “S” mintmarks took place on April 19 and consisted of $2.50, $5, $10, and $20 denominations.[6] Gold dollars were delivered later in April. By the end of the month, all current gold denominations had been made, save for the $3 (which would not be struck until 1855).

However, it was soon learned that nearly all depositors preferred the larger values, and later production emphasized $10 and $20 coins. It is to be recalled that at the time there was no paper money in use in California or elsewhere along the Pacific Coast, thus placing an inordinate pressure and demand on the $20 double eagle to facilitate large transactions and to simplify the counting of large reserves. A local craftsman supplied small wooden boxes to the Mint, suitable for steamer shipments of $20 coins, these immediately becoming the denomination of choice for export to the East Coast.

A lively trade in gold bars involved banks and merchants who desired them, not for local commerce, but for shipment by sea to New York, London, and other financial centers. In addition to the activities of the local Mint, several large private firms advertised delivery of gold bars at prices competitive with the mint, and sometimes more quickly.

In the first year of operation of the San Francisco Mint, 1854, production seems to have gone fairly smoothly and according to expectations. However, now and then work stopped due to shortages of supplies, especially acid for the parting of raw gold.

Among the denominations struck by the San Francisco Mint, the $20 was the most important. In the 1854 Annual Report of the Director of the Mint, James Ross Snowden commented on the popularity of that denomination:

Depositors of large amounts [of bullion] call for coin in a form which gives the least trouble to count; and banking institutions, in addition to that, may prefer it in a form not likely to be drawn out. Many [of the general public] who present their checks at these institutions would doubtless ask for specie, but are deterred from doing so by the expectation of receiving double eagles instead of half or quarter eagles. In a word, the plain effect of issuing gold coin of a large size is to keep down the circulation of specie and increase the use of paper money.

This remark, of course, does not apply to such localities where paper money is prohibited—as, for example, in the state of California—because in such cases the different currencies cannot come in conflict.

[1] This central steam engine supplied power to machines via a system of shafts and pulleys.

[4] The term blanks correctly refers to discs of metal that are cut from strip. Numismatically, they are also called planchets. However, a more precise definition of planchet would be a blank that has been run through a milling machine to give it a raised rim, readying it for use in a coining press (cf. R.W. Julian, letter, December 27, 1998).

[5] Coins struck from California gold with silver as a partial alloy tended to be straw yellow, rather than the “warm” or rosy “more beautiful” hue of a Philadelphia Mint coin made of gold alloyed with a full 10% copper. On January 17, 1852, a reporter for the San Francisco Herald visited the private mint of Wass, Molitor & Co., and commented on a process employed there: “The finishing touch is put to it by roasting it, so as to give it a bright color.” So far as is known, roasting was not done at the San Francisco Mint.