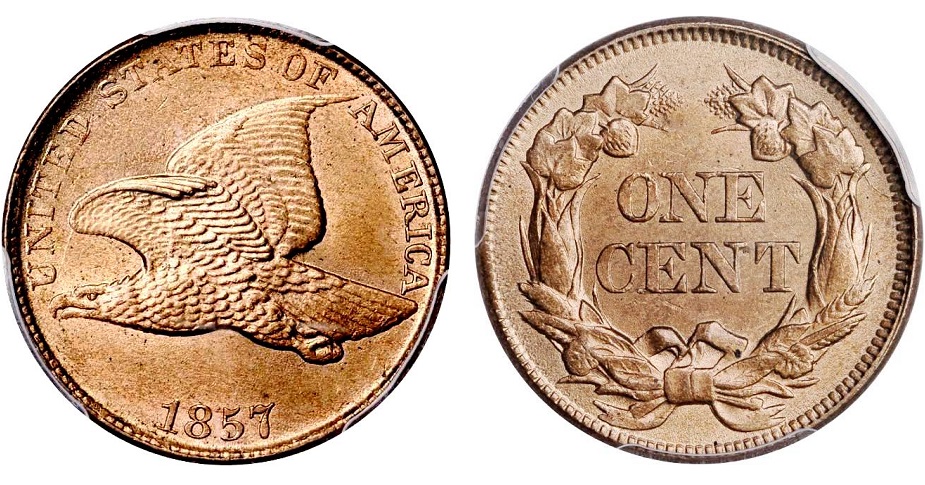 The Mint Act of February 21, 1857, eliminated the copper half cent and cent and provided for a new, small cent of 88 grams’ weight, made of copper-nickel alloy. The new Flying Eagle cents were struck in large quantities (amounting to 7,450,000 for the entire 1857 year)  and were initially distributed on May 25.

By 1858 the stage was set for a cent-collecting fever. Thousands of citizens cherished their sparkling new Flying Eagle cents while contemplating the disappearance of the familiar copper “pennies” of childhood days. Pocket change and cash drawers were searched, and soon quite a few collectors had strings of such coins dating all the way back to the first year of issue, 1793, but perhaps lacking the rare 1799, 1804, and 1823. The earlier coins were apt to be well worn, with dates and designs barely visible. The most recent ones showed blushes of orange Mint color.

Edward Cogan, an art dealer in Philadelphia was asked to sell a friend’s collection of copper cents, and sent out listings, inviting bids by mail (closing on November 1, 1858). Bids were received from 19 people. A 1793 Chain cent sold for $12.67, a 1793 Wreath cent brought $5.13, a 1793 Liberty Cap realized $7.25, a 1799 cent sold for $7, and an 1804 brought $5.50, among others. This was exciting news; it was picked up by the local papers and was soon reprinted throughout the East. Cogan was deluged with letters from people wanting to buy and sell coins. Soon, he decided to become a professional numismatist.

On January 1, 1858, the Philadelphia Numismatic Society was formed, becoming the first such group in the United States. In March 1858, teenager Augustus B. Sage and friends founded the American Numismatic Society in New York City. By late summer there were nearly a dozen dealers active in the United States, including, in New York alone the venerable John Allan and three young men: Augustus Sage, Henry Bogert, and John Curtis.

Proof coins became popular in 1858, and an estimated 210 sets of silver denomination coins were sold, plus a larger number of copper-nickel Flying Eagle cents. Proof gold coins were available singly, and the dollar was the most popular denomination in this metal, probably with a sale of a few dozen or so.

Also in 1858, the first important numismatic book was published in America, An Historical Account of American Coinage, by John H. Hickcox. The slim volume included 151 numbered pages plus five pages of illustrations, these by John E. Gavit of Albany, a well-known engraver of banknotes. Hickcox had spent some time in research and had contacted historical societies and several numismatists as well as Mint Director Snowden. Only 200 regular copies were printed, and these were mostly sent to libraries and historical societies. For collectors, there was no single, readily available source for information, and many still sought the elusive copper cent of 1815, not realizing that none were minted that year.

Today, collectors can refer to the Guide Book to learn about mintage and pricing as well as information about varieties and grading.