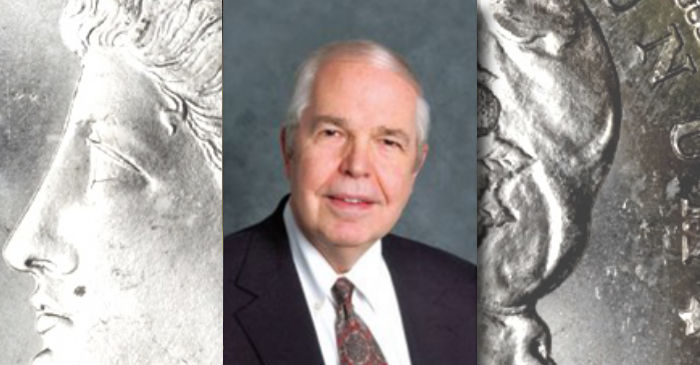 As readers of my writings know well, I enjoy coins that have stories. Every collection has room for a 1909 V.D.B. Lincoln cent and an 1883 Liberty Head nickel without cents. They are common and inexpensive, including in high grades. For those who can afford $10,000, more or less, a like-new 1857-S double eagle from the SS Central America treasure is a must-have.

This week I tell of an erstwhile great rarity, a coin that merited a chapter in my More Adventures with Rare Coins book published by Whitman. If you plan to attend the Whitman Coin & Collectibles Expo in Baltimore this week, I will arrive on Thursday and would be glad to autograph your copy if you bring it, or you can buy one at the Whitman display. It was fun to write, and you will enjoy reading it. 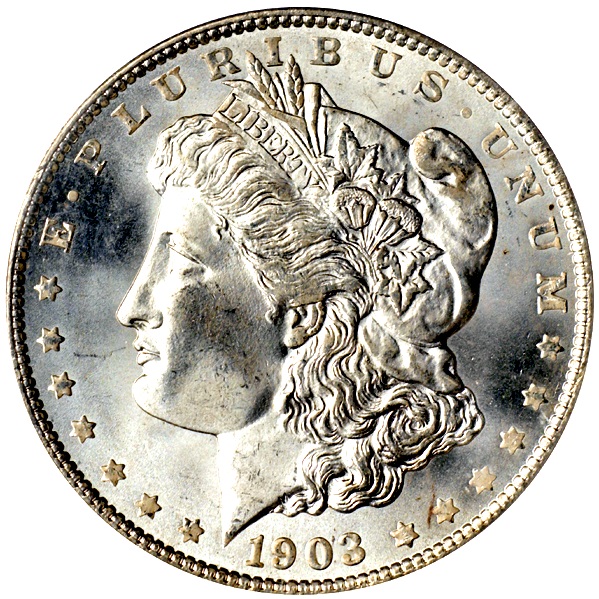 In 1903 at the New Orleans Mint, 4,450,000 million circulation strike silver dollars were minted. Not needed in circulation at the time, most of the coins were placed in storage. Silver dollars were a glut in American commerce, and even the Treasury Department did not know what to do with all of them. The Bland-Allison Act of February 28, 1878, the Sherman Silver Purchase Act of 1890, and other boondoggle pieces of legislation were enacted to make Uncle Sam the buyer for millions of ounces of silver mined in the West. 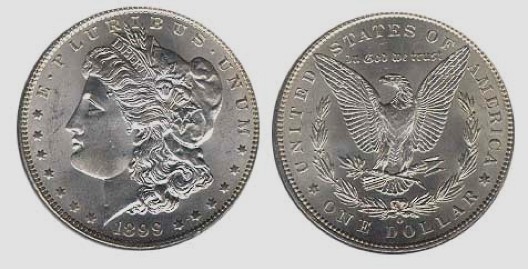 An 1899-O Morgan dollar. Some of the most famous American coins, today they are the most widely available of the types produced in New Orleans.

It was determined that the easiest way to store all of this silver was to mint it into the largest denomination of that metal, the silver dollar. From March 1878 onward, hundreds of millions of silver dollars were struck, using a design by George T. Morgan (hence the “Morgan dollar”). Millions were placed into circulation, but hundreds of millions of others were stored in vaults set up by the Treasury, including at other mints, at the Treasury Building next to the White House in Washington, and in government Post Office buildings. By 1918 about a half-billion unwanted silver dollars were in storage.

In 1918 the Pittman Act provided for the eventual melting of 270,232,722 silver dollars of earlier dates, including nearly all of the 1903-O mintage. The huge-mintage 1903-O dollar was recognized as a great rarity when collecting Morgan dollars became popular in the mid-20th century. A Mint State 1893-S (today worth several hundred thousand dollars) was common in comparison.

An early appreciation of the 1903-O was printed in The Numismatist, July 1925, in this note by Howard R. Newcomb, a Detroit collector who was an avid student of silver coins by mintmark varieties:

“There seems to be something peculiar about the standard silver dollar of 1903 issued from the New Orleans Mint. Although the government records indicate a coinage of 4,450,000 pieces, I failed to locate, in the last half dozen years, any specimens either in the hands of dealers or collectors, save one in my own collection and one in a prominent collection in Washington, D.C. They seem to be equally scarce even in circulation.

“Although silver dollars were not plentiful in circulation in these parts, I have enlisted the aid of the head cashiers in three of our larger stores to be on the lookout for this piece. It is customary in these stores when silver dollars are received not to give them out again in making change, but to deposit all of them. These men, for several years, have looked over thousands of silver dollars and not one has come to light. Two of our A.N.A. members, one in Los Angeles, the other in San Francisco, have also searched where the silver dollar is plentiful and they, too, have been unable to find any. The only explanation I can offer is that the government, during the late war, sold the entire mintage as bullion and the entire mintage rested in the government vault, undisturbed, until that time when so many millions of silver dollars were melted up.” 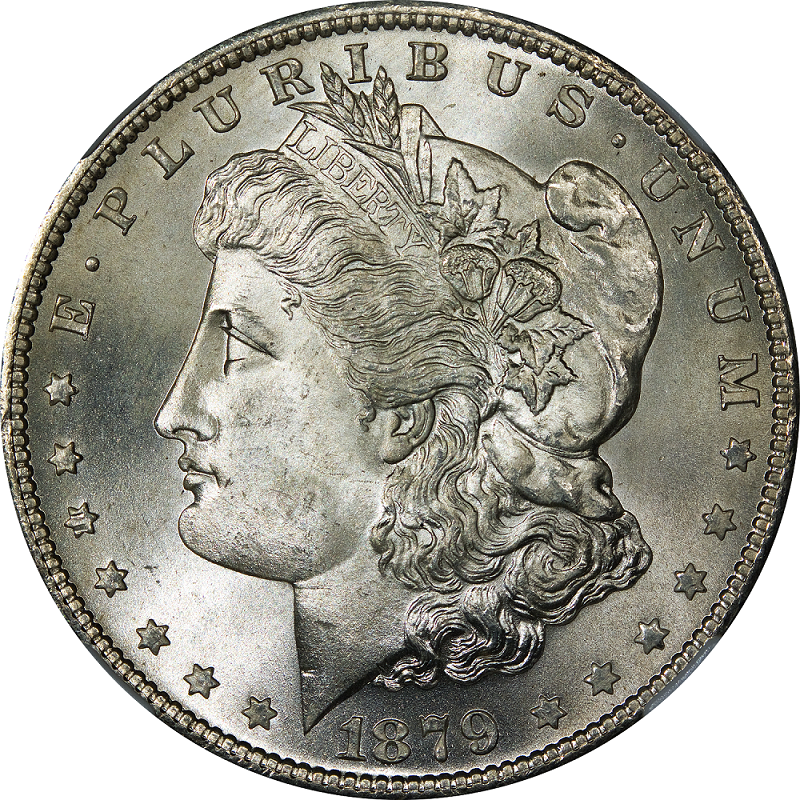 The obverse of the Morgan silver dollar. This particular coin was minted in 1879 at the San Francisco Mint (S mint mark) and is graded MS-67+.

Beginning in the 1930s the number of numismatists seeking 1878-1921 Morgan silver dollars by date and mint increased to hundreds, if not several thousand. It was soon learned that while most of the more than 95 major varieties could be obtained without undue effort, there were a few “stoppers,” and prime among these was the 1903-O. Occasionally a well-worn one would be encountered, but a Mint State example—forget it! Most dealers had never even seen one!

When I became a part-time dealer in high school in 1953 I began buying and selling a lot of Morgan silver dollars, including the occasional Fine and VF coins. I joined the dealers who had never seen one, although I had seen several 1804 silver dollars (“the King of United States coins”).

Years slipped by, coin collecting became increasingly popular, and by October 1962 tens of thousands of numismatists collected silver dollars by dates and mintmarks. The standard arbiter of coin values was A Guide Book of United States Coins, which had been issued annually since 1946. In the Guide Book in 1962 the 1903-O silver dollar in Uncirculated condition listed at $1,500. 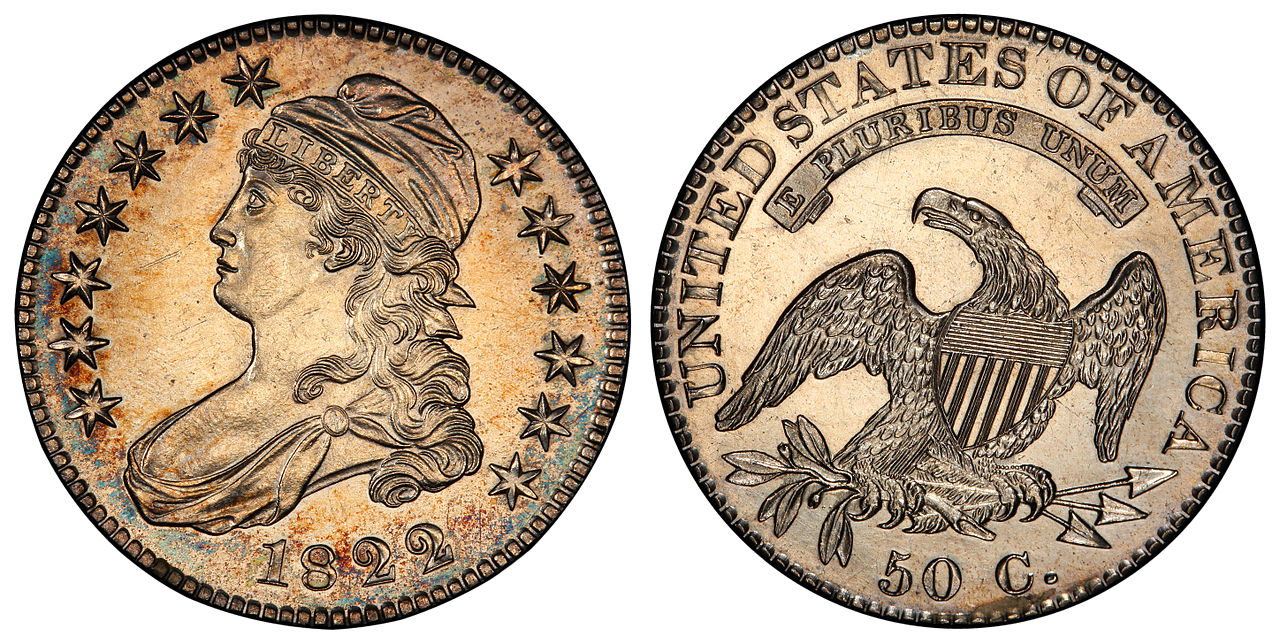 For perspective I mention that at the same time in the coin market a typical Liberty Seated dime in Uncirculated condition catalogued for about $12, an Uncirculated 1796 quarter could be bought for $2,750, and a Mint State Capped Bust half dollar of the 1820s merited a valuation of $16.

In October 1962, the numismatic world was shocked by the news that a few Mint State 1903-O dollars had come to light. Telephone calls were made, dealers had conferences with each other, and it was concluded that some had trickled out of the Federal Reserve holdings, along with examples of 1898-O and 1904-O, issues also considered to be rarities. Within a week or two, the “few” coins of these three New Orleans Mint issues expanded to several million.

A treasure trove beckoned. Not often in life does anyone have the chance to buy coins listed at $1,500 in the Guide Book for face value! Banks, the Federal Reserve outlets, and others holding dollars were besieged with buyers. As the Treasury dug deeper and deeper into the vaults, more and more silver dollars of various early dates were found. Values plummeted.

The race was on, and the silver dollar market would never be the same again. The news spread that the 1903-O and other New Orleans silver dollars had been shipped to the Philadelphia Mint in 1929, and had remained in a joint-sealed vault since that time. A generation of distinguished Philadelphia numismatists came and went, without knowledge of their existence in their very backyard! Additional coins came out from hiding in the Treasury Building in Washington, D.C., where, for some unexplained reason, they had not been noticed by coin-wise employees earlier.

Reminiscing in The Comprehensive Silver Dollar Encyclopedia, dealer Dean Tavenner said that in Helena, Montana a banker had 1903-O dollars available in quantity by February 1963. The least Dean Tavenner remembers paying for an Uncirculated piece was $7 each, probably in the summer of 1963. He recalled that by November 1975 he sold five rolls for a banker from Dillon, Montana for $2,100 — which amounted to $21 per coin.


Writing in an advertisement in The Numismatist in January 1964, Steve Ruddel told of an unspecified Kansas City dealer who “panicked. . . when he got a bag of ‘03-Os. He soon flooded his local market and got $3 or $4 each. At the same time, I had a standing offer of $15,000 a bag and couldn’t buy any.”

I was first told about the release of 1903-O (and 1898-O and 1904-O) dollars by Philadelphia dealer Harry J. Forman, who telephoned dealers and collectors around the country to alert them to the situation and also to warn them against deception. It seems that a few clever insiders obtained coins of these three formerly-rare dates, and hurried to dealers’ stores to sell them for cash — at prices based upon the old catalogue listings. One such insider flew to London, where he endeavored to steal a march on B.A. Seaby, Ltd., A.H. Baldwin, and Spink & Son, Ltd. — the three leading British rare coin dealers at the time. After the news broke, I was offered a few bags for $17,000 each in late 1962 or early 1963 by a Detroit source, but I declined, as I was fearful that about four million more coins would be coming out of the Treasury; I was wrong on the four million, but time would have vindicated a purchase at $17,000 per bag.

From the preceding incredible scenario, the 1903-O Morgan dollar remains as one of the most interesting mementoes. There are enough around that, unlike Howard Newcomb in 1925, you can easily buy one now, and inexpensively. A nice Mint State coin costs only a few hundred dollars.

Bowers on collecting: “With the ever-circling years comes round the Age of Gold.”