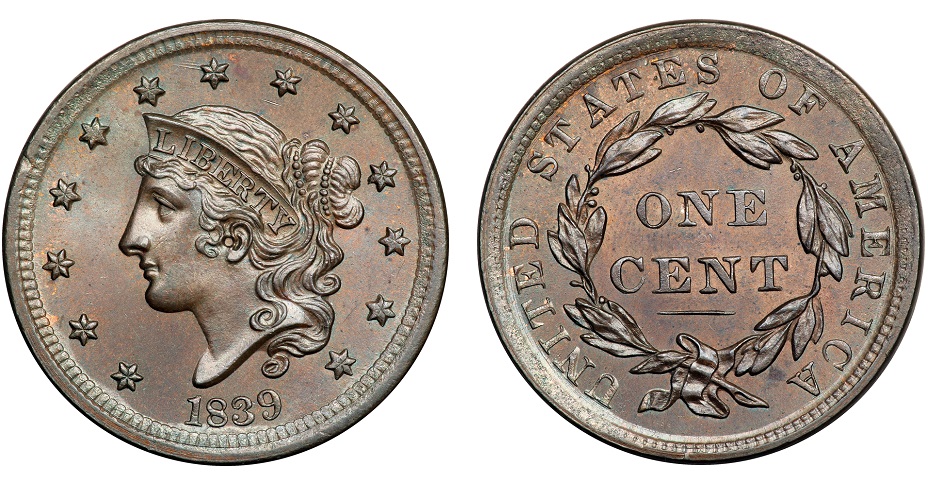 Of all dates in the Matron Head series, cents of 1839 are the most diverse, and, because of that, likely the most fascinating. The 1839, 9 Over 6, is one of the most interesting overdates in the series. In 1839 a die of 1836 with Plain Hair Cords was overdated with a 9, creating an 1839 cent with Plain Hair Cords — a style that had been discontinued two years earlier. Today, this overdate is nearly always seen in lower grades, with VG to Fine or the occasional VF being usual. Any higher grade is a rarity. The estimated population of this 1839, 9 Over 6 cent is 200 to 350 pieces.

1839 was a year of transition and the Matron Head was discontinued late in the year. It seems that in 1839 Christian Gobrecht was contemplating many changes. Already, in 1838, the Braided Hair design was adopted on the $10 eagle; in 1839 it would be employed on the $5 half eagle, and then, in 1840, on the $2.50 quarter eagle — these being all of the gold denominations at the time. The silver series had been revised recently, beginning with the Gobrecht dollar in 1836 and the use of the Liberty Seated motif in the other denominations, including the half dime (1837), dime (1837), quarter dollar (1838), and half dollar (1839).

In 1839 the engraver experimented with some new portraits for the cent, including those we know as the Silly Head and the Booby Head. Problems of striking had been endemic to the Matron Head series since day one, with the obverse stars, in particular, causing problems. By 1839, the Small Letters style of the reverse had helped solve that, as less metal flow was needed in the pressing the area of the reverse die opposite the stars on the obverse. Toward the end of the 1839 year, the Braided Hair design — an adaptation of that used on the gold coins — was made standard for the cent.

1839, Head of 1838: This is the style of the preceding year (and also late 1837) without a “browlock,” or protruding wave of hair on the forehead, and with the back of the shoulder covered by hair. There is a line under “CENT” on the reverse.

1839, Silly Head: This variety appears with prominent browlock (curl of hair projecting to the left at the top of the forehead). Hair surrounds the back of the shoulder and base of the “T” of “LIBERTY,” with the serifs of “T” touching the hair. There is a line under “CENT” on the reverse.

1839, Booby Head: This variety appears with prominent browlock. Hair surrounds the back of the shoulder, and “T” of “LIBERTY” is embedded in the hair, with no serifs visible. There is no line under “CENT” on the reverse.

Close-up photos of these head styles can be found in A Guidebook of Half Cents and Large Cents which also list varieties within each of these with their Newcomb numbers given by Howard Newcomb in his book titled United States Copper Cents 1816-1857.