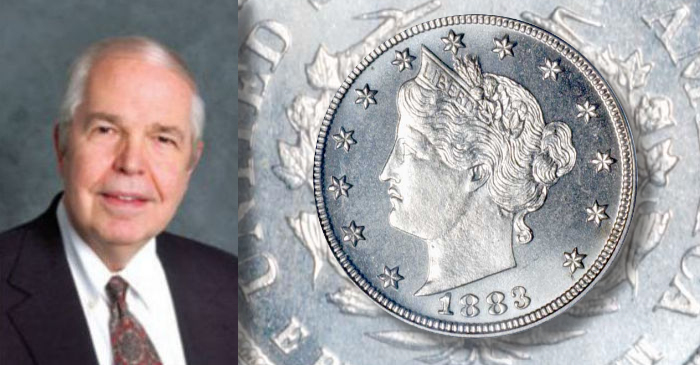 On January 30, 1883, the first Liberty Head nickels were struck for circulation. By that time, 1,451,500 Shield nickels had been made with the 1883 date. This caused a flurry of speculation in Proof 1883 Shield nickels, as dealers, collectors, and investors thought they would prove to be very rare. Record quantities of Proofs were made.

Joseph Wharton, the main supplier of nickel metal to the Mint; a man with close political connections, was not completely satisfied. It certainly would be nice to have more than just 25% nickel in the alloy of the coin. In response, in 1883, Superintendent A. Loudon Snowden directed Chief Engraver Charles Barber to make some more patterns. This was done, including one inscribed PURE NICKEL (a dream come true for Wharton!); another with 75 N. 25 C.; a further with 50 N. 50 C. or half-and-half; and one with 33 N. 67 C.

Although the Mint would not admit it in 1883, nickel had caused problems for a long time, starting with the difficulty of striking copper-nickel (88% copper, 12% nickel) cents in 1857, one of the reasons for switching to bronze for cents in 1864.

The patterns of 1883 yielded no new results, and the old alloy of 75% copper and 25% nickel was continued in the denomination.

On January 8, 1883, Mint Superintendent Col. A. Loudon Snowden authorized that the new design be used. Production commenced soon thereafter, and on February 1 the first pieces were placed into circulation.

At the time the American Journal of Numismatics was the premier periodical devoted to the coin hobby, having been published since May 1866. The April 1883 issue included these mentions of the new coin:

MINT COINS FOR 1883: At the opening of each year demands are made at the Mint by coin collectors, numismatic societies, and others, for Proof coins, or sets representative of a year’s coinage. To meet this demand, special coins are struck as is well known, and sold at rates proportional to the extra labor involved. These sets are in gold, silver, nickel and copper. The regular Proof set of gold coins is sold for $43; the silver and minor $4.05, and exclusive of the trade dollar $3.05. The minor coins, embracing the old and new 5-cent coin, the 3-cent piece, and the bronze penny, are sold at 18 cents the set.

The stamping of the new 5-cent coin has increased the interest among collectors, and many requests are made for the set containing the old and new half-dime piece. Large orders have been received from the Northwestern states, Mississippi Valley, and the Pacific Coast, where there are few small coins, for the new 5-cent piece. This demand has been greatly increased by the descriptions of the new coin so widely printed.

The Mint supplies this coin in amounts of $5 each, and the parties to whom the coins are sent pay for the expressage, but if sent in sums of $20, the expressage is paid by the Mint itself. We have noticed boys peddling this new coin along the streets at 20 cents each, the price varying with the demand. Some impressions are found struck from a broken die. It is reported that all of this issue are to be recalled by order of Secretary Folger [Charles J. Folger, 34th secretary of the Treasury, served from 1881 to 1884] and the dies altered by adding the word CENTS.

Elsewhere in the same issue was this:

As has been mentioned on a previous page, the recent issue of a five-cent nickel is to be recalled, and another one coined with some alterations in the design. According to the best information we have yet received, the principal if not the only change is on the reverse, which is to have the word CENTS inscribed below the numeral of value, V, and the motto E PLURIBUS UNUM is to be placed above instead of below the wreath.

Soon, the Mint recognized the significance of the omission, and the word CENTS was added. Meanwhile, over five million of the “error” nickels had been placed into circulation. The interest of numismatists was aroused immediately, especially when the American Journal of Numismatics as well as the popular press stated that these pieces were to be recalled. How exciting! 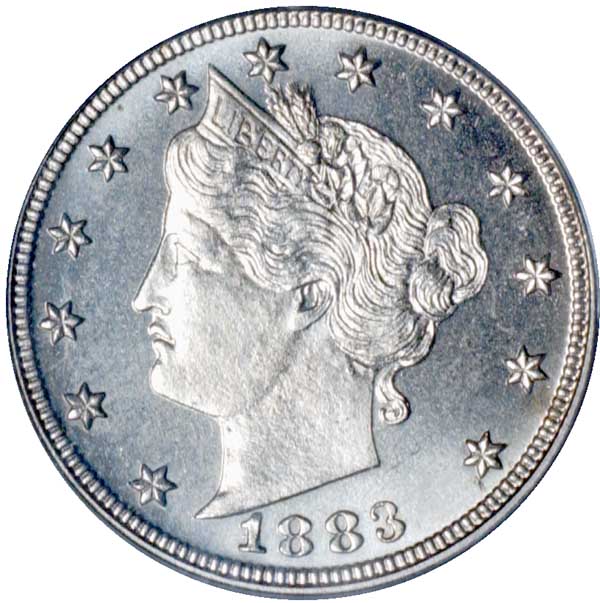 R. Coulton Davis, a Philadelphia pharmacist who collected many series of coins, especially patterns, sent examples to certain friends, including one presented by him to the American Numismatic and Archaeological Society. The receipt of “the first emission of the five-cent nickel” was acknowledged at the Society’s May 15 meeting. 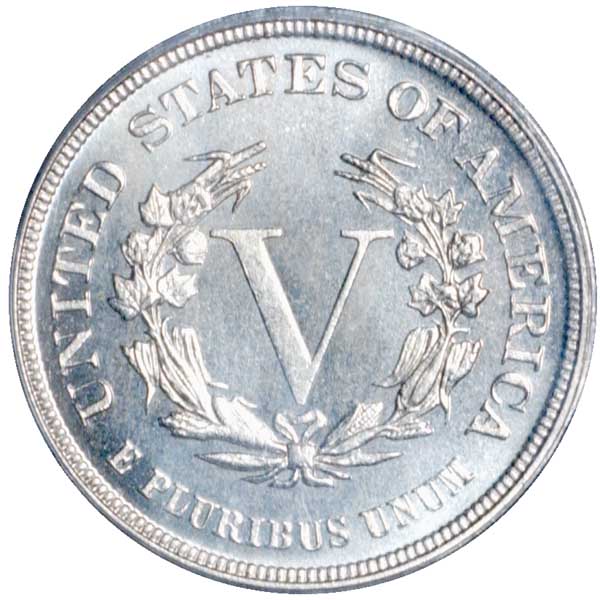 The new “V nickel,” as it came to be called, was nearly the same diameter as a five-dollar gold piece. As to who came up with the idea of reeding the edge (by filing or using a tool-shop milling machine) and gold plating these V-coins is lost to history. However, a bright yellow gold-appearing coin with a bold V was readily accepted as a $5 half eagle, perhaps of a new design, if someone looked closely.

It was related that the scheme ran something like this: A gold-plated nickel, posing as a $5 gold coin, would be tendered for the purchase of an item priced from one to five cents, such as a newspaper or a cigar. The clerk, gazing at the “five-dollar” coin quickly, put it in the cash drawer and gave the purchaser the appropriate change, $4.95 or a few cents more.

This caper attracted the attention of various writers, who, in time, related that a man named Josh, often given the surname “Tatum,” was convicted in Boston (or Philadelphia or New York) of exchanging these gilded pieces, giving rise to the saying, “You’re joshing me,” when someone attempts a minor deception. Never mind that “josh” was already a part of American slang at that time! This is one numismatic tale that refuses to go away, and every once in a while it reappears in print.

Certain information in this account is adapted from that presented in my More Adventures with Rare Coins, 2001.