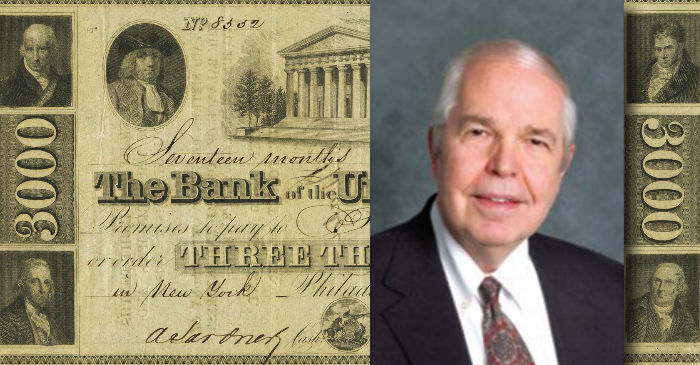 I love history, and over a period of time, I have immersed myself in many accounts published in early newspapers, books, and directories. These include Niles’ Weekly Register, launched in Baltimore in 1811, and continued for decades afterward. I skimmed every issue and read anything that had to do with finance or numismatics. The result was an “I was there” experience, such as in late summer 1814 when Hezekiah Niles, editor, was at his desk in Baltimore while British forces were approaching the city. Of course, we all know they didn’t make it, and the rockets fired from Fort McHenry forced the British ships to flee from the Chesapeake, with “The Star Spangled Banner” memorializing this event. I have looked through the Congressional Record, the National Intelligencer, and other early print matter—this in an era when it had to be done by hand. Today, most of these sources are on the Internet and are searchable. Probably, what took me a year to do a decade or two ago could be done in a month now! 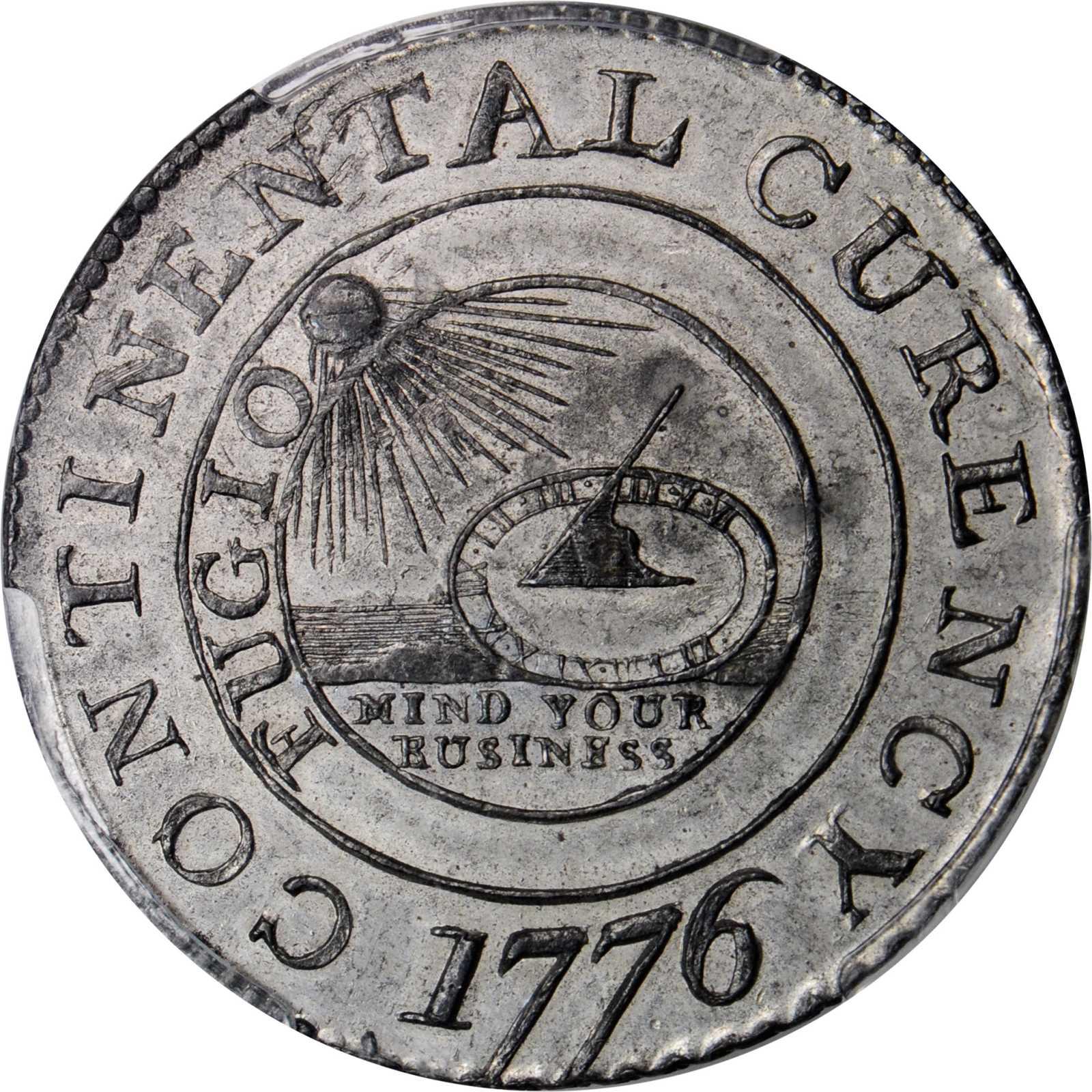 As it is, there are still things I am seeking that I have not found on the Internet. The subject of the 1776 Continental dollar (most of which are struck in pewter and grade from Very Fine to About Uncirculated, indicating use in commerce) has come to the fore in recent years. Where were they made and by whom? Ever since the mid-1950s, I have studied the 1785–1788 coppers made for the Republic of Vermont (it did not become a state until 1791). Even with Internet searching, I have found very little new information to add to what I gathered earlier. And then there is the little town of Arcadia, New York, where some of my ancestors settled in the late 1850s after emigrating from Germany. 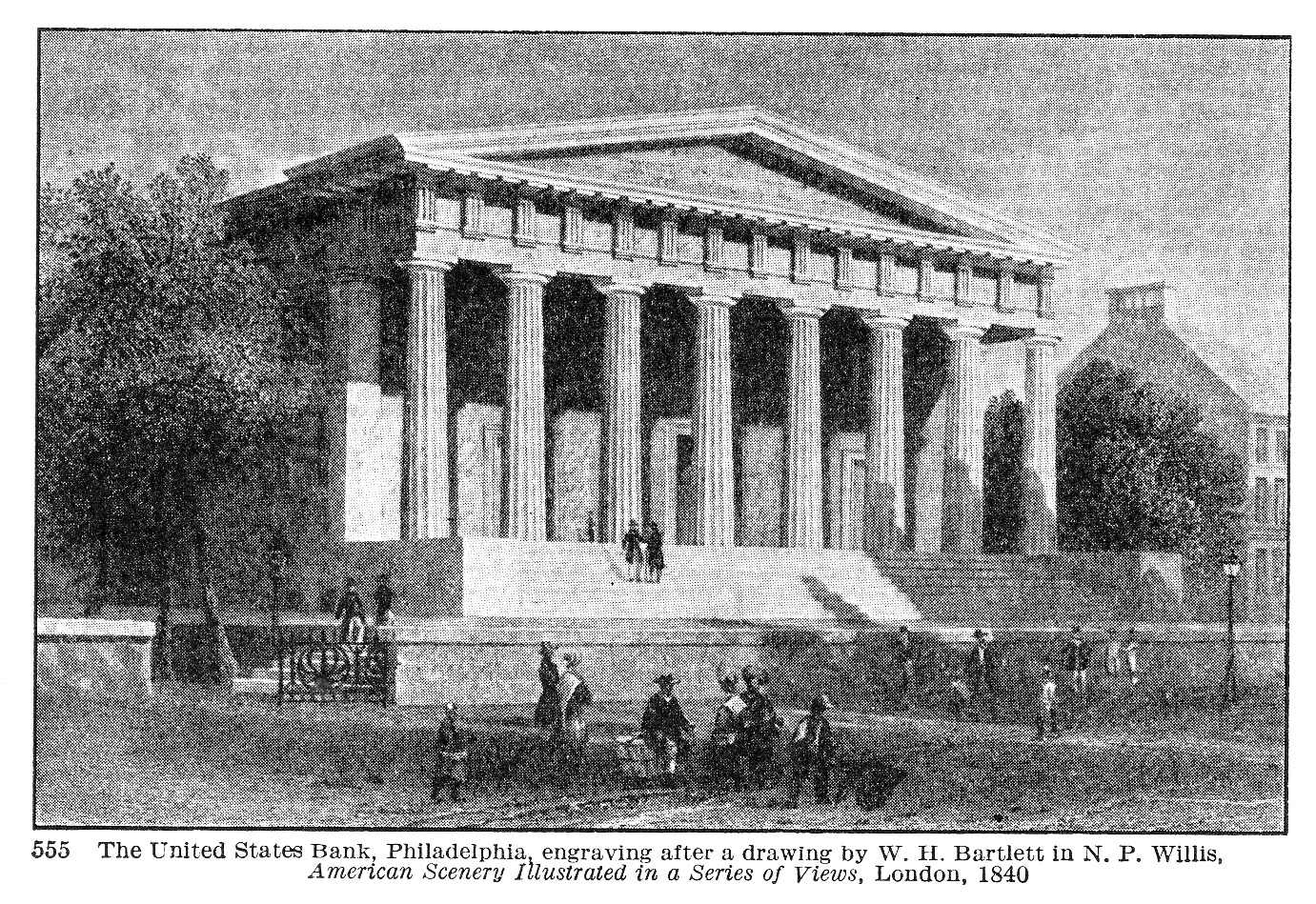 However, I am getting off-topic, so now to the history of the Bank of the United States—an interest of mine for a long time, and the entity, actually two entities, that I read about in the aforementioned Niles’ Weekly Register and other publications, including quite a few books written in the 19th century into the early 20th. Andrew Jackson is one of my favorite 19th-century personalities, and I have read a lot of source material about him. I have delved into Senator Thomas Hart Benton, his daughter and her connection in a way with the San Francisco branch mint, and more. Lots of fun. On the other hand, I haven’t paid much attention to Henry Clay (except for his 1844 presidential campaign) or New Hampshire native Daniel Webster (honored here, but did he have to move to Massachusetts?).

In writing this article I sent a draft to several people, including John Kleeberg and Joel Orosz. Both are rocket scientists, so to speak when it comes to history, and both have written extensively. Their feedback, including corrections, has resulted in a rewrite and expansion of my original narrative.

By any account the two Bank of the United States institutions were controversial: Were they essential to the health of the American economy in their time, or were they partially helpful but also an interference? Today, in my opinion, later accounts of them are often confusing and muddled. Congress chartered the first in 1791 with a 20-year life. This became standard with many state-chartered banks and, beginning in 1863, with federally chartered national banks. The idea was to allow two decades for a bank to go into business and, it was hoped, prosper. Near the end of the term, the officers of the bank could petition to have the charter renewed. The charter of the first Bank of the United States expired in 1811. Its operations were quite controversial, and the charter was not renewed. Fast-forward to 1816, and a new contingent in Congress, plus optimism following the War of 1812, furnished the basis for establishing the Second Bank of the United States, also with a 20-year charter.

Neither bank was a federal bank in the sense of being owned and managed by the government and the Treasury Department. Instead, they were what can be called public-private enterprises. Most of the stock was held by private individuals and interests. 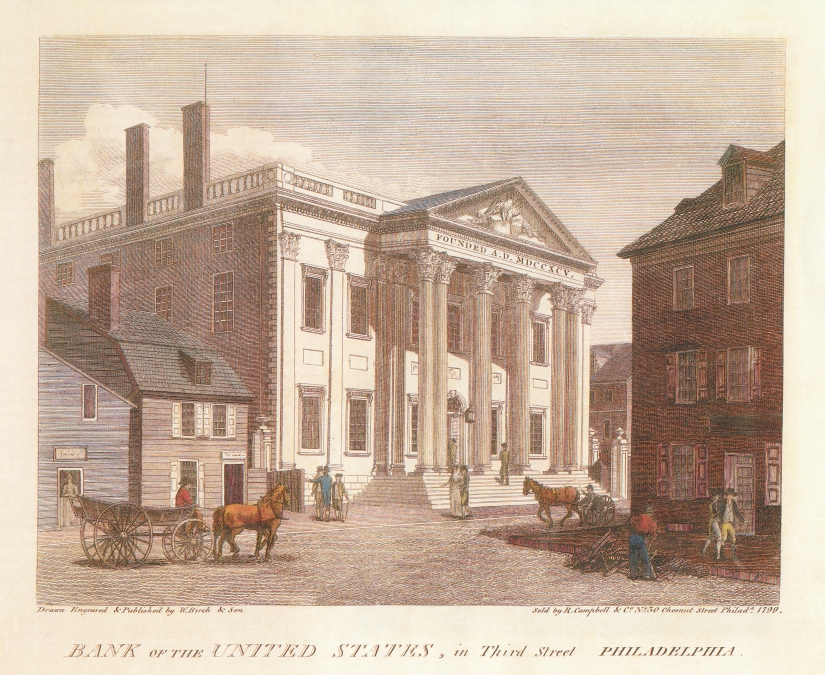 Both were headquartered in Philadelphia, with branches in other cities. The second Bank of the United States, the main subject of this article, was headquartered in Philadelphia in a new grand building in the Greek Revival style. In time 26 branches were opened in various towns and cities, a very short list including Boston, Baltimore, Portsmouth (New Hampshire), Washington, and Charleston. The bank issued paper money in various denominations, printed by private engraving and printing companies, which circulated widely. 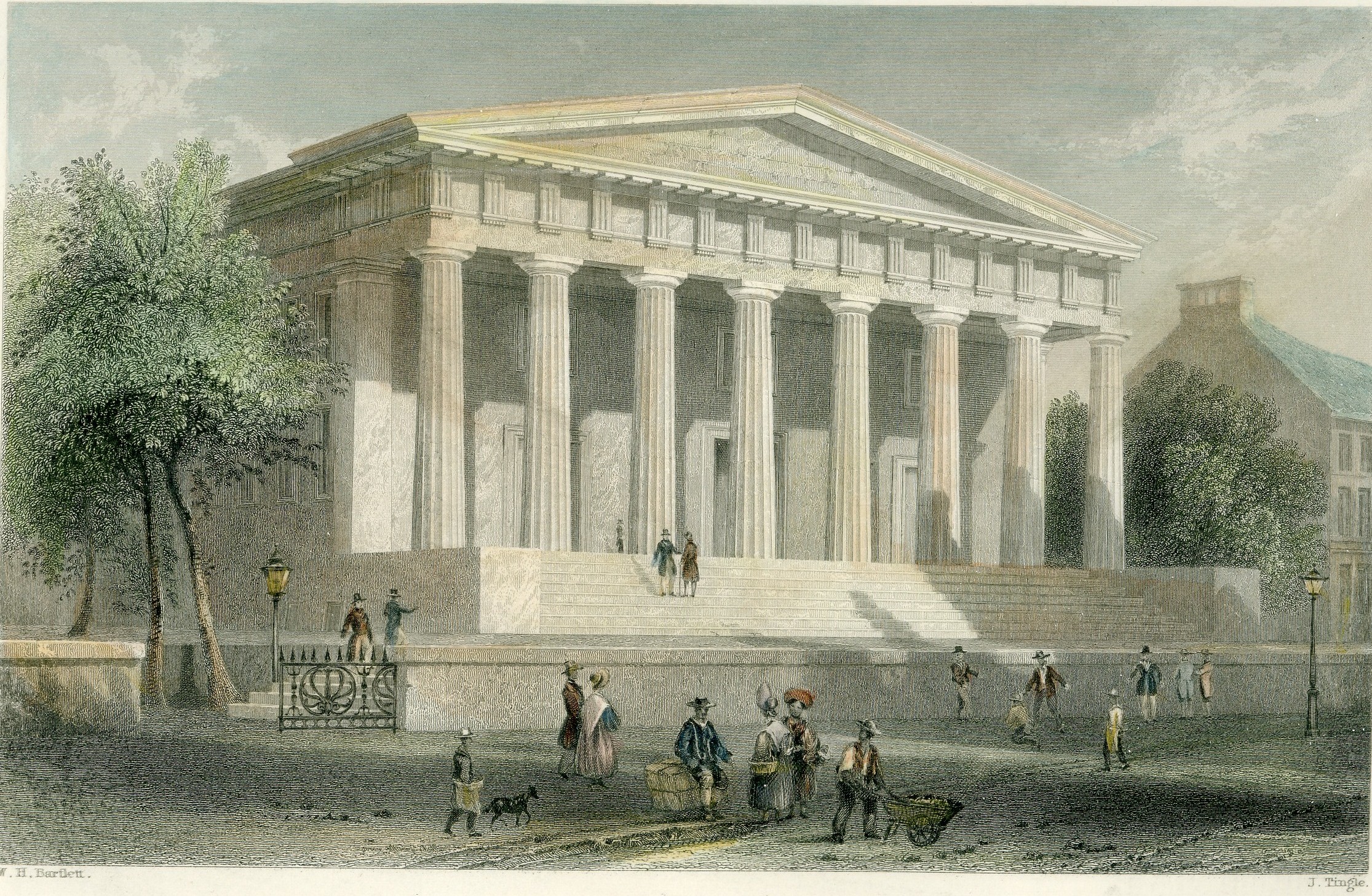 The Bank of the United States.

A Bank of the United States note, of, say, $20, could be cashed at face value in Portland, Maine, in Charleston, South Carolina, or in Chillicothe, Ohio. As such, they were a stable unit in commerce, accepted everywhere. In unfortunate contrast, in the same era, this was not true for money of the several thousand state-chartered banks that as a group issued a far greater number of notes. These state banks were owned by stockholders who formed to seek state charters, after which capital was raised by selling shares to the public. However, unlike the bills of the Bank of the United States, which could be cashed almost anywhere for full face value, the notes of state banks were mainly of regional interest. For example, a $20 note issued by a bank in Portland, Maine, could be redeemed at face value at that city or even in Boston, where there was a currency exchange, but someone taking the note to Savannah or Charlotte or Pittsburgh would find it would not be accepted at all, or, if it was, only at a deep discount.


State-chartered banks had thousands of stockholders and their officers were often leaders of the various states (including governors and legislators), so the Bank of the United States was viewed as unfair competition. Great resentment developed concerning this. Most of the state-chartered banks were sound financially and well managed. However, as a further complication, there were many exceptions, and some notes of state-chartered banks were basically of questionable value, even in their places of issue. In contrast, there was no question about Bank of the United States notes, except for occasional counterfeits (which merchants and banks either were unaware of or simply passed along to the next customer). 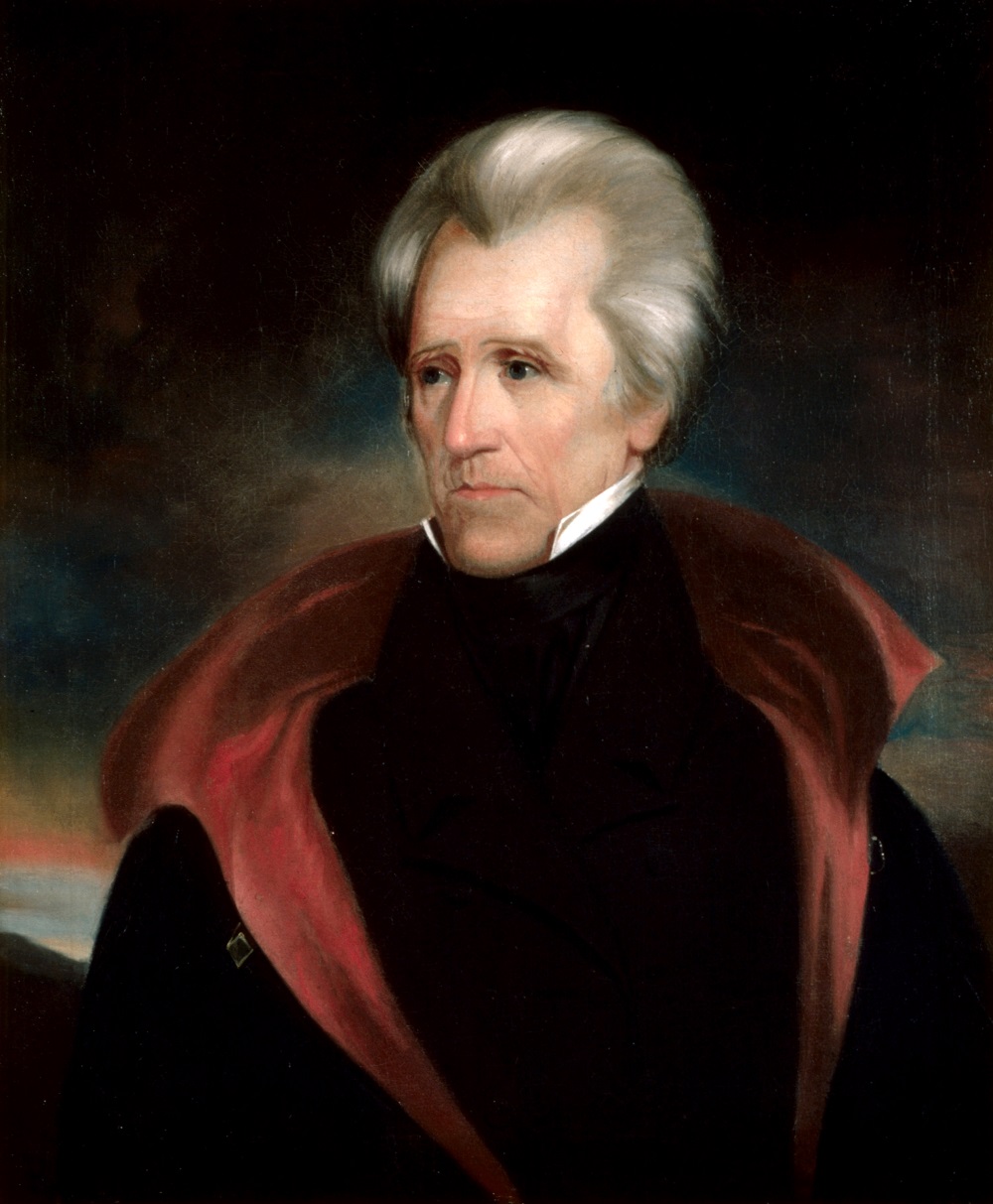 In 1824 Andrew Jackson ran for president against John Quincy Adams. Jackson, a rough-cut military hero, contrasted the New England gentility of Adams. Jackson won the popular vote, but Congress decided the outcome and named Adams. A great brouhaha was caused, and Jackson and his followers formed the Democratic Party. In 1828 the same two men faced each other, and Jackson won by a landslide, with the results uncontested. He took office on March 4, 1829. His term, while controversial (mostly arising from the threatened secession of South Carolina from the Union due to a tariff viewed as unfavorable), was quite successful in an era of growing prosperity in America. (Whether he was significant in this expansion is a matter of controversy among historians.) Members of the old-guard, the friends of Adams and others, were distressed. In 1832 Jackson was elected to a second term. This had its own “situations,” including the “Petticoat Affair” with the flirtatious (and more, according to some accounts) Peggy O’Neal causing the resignation of some Cabinet members.

With advice and counsel, Jackson, casting himself as a “common man,” formed a strong dislike of the Bank of the United States, thought to be controlled by the aristocracy, and stated that he was against having its charter renewed (scheduled to happen in 1836). Certain of his followers agreed. In Congress, an alarm was sounded and it was decided to advance the renewal of the charter to 1833, so that the Bank of the United States could operate with confidence after that point, during Jackson’s second term, continuing to the stated charter expiration in 1836, and possibly even have the charter renewed by Congress for another 20 years to 1856.

That did not happen, as after Congress approved in advance the 1836 renewal, Jackson vetoed the legislation. The death knell was sounded for the Bank of the United States. In the mid-1830s it wound down with the various branches being liquidated and buildings sold; by late 1835 there was not much left.

In the meantime, in the 1830s there was great speculation and prosperity in the Prairie lands, these comprising territories west of Pennsylvania, including Ohio, Indiana, Illinois, and other districts. The federal government was selling millions of acres of land, and it could be purchased by giving promissory notes or notes of state-chartered banks, some of which uncertain value. The matter got out of hand, and in the summer of 1836, President Jackson issued the Specie Circular, which mandated that, henceforth, federal lands could only be purchased by paying in gold and silver coins. By that time the Bank of the United States was nearly completely defunct. Not all was well, and on the other side of the story, as John Kleeberg reminded me, there were many problems in the cotton market, the issuance of state bonds that defaulted, and more. Due to various causes, investment and speculation ceased, values fell, and the stage was set for an economic adjustment. Early in 1837, there were economic disturbances in New York and elsewhere and a chill was felt in commerce. In the meantime, Jackson had not run for reelection, and in March 1837 Martin Van Buren, his vice president, was elected to the position. Economic matters went from bad to worse, and beginning on May 10, 1837, nearly all the banks in the East stopped paying out silver and gold coins at face value in exchange for paper money. The Panic of 1837 ensued, an economic depression that lasted until early 1843 (which seems to have been the end of the “Hard Times” era), after which prosperity gradually returned, and continued into the late 1850s, later checked by the Panic of 1857.

That is my well-studied (in my opinion) view, taken from original sources, plus, as noted, some recent adjustments by John Kleeberg.

It is my opinion, not at all widely shared, that the idea that it was President Jackson’s veto of the Bank of the United States charter in 1833 that was the primary cause of the Panic of 1837 is not correct. However, excellent studies have been made on both sides of the question. Perhaps of related complexity: Who was the greatest president of the United States? Washington? Lincoln? FDR? Who was the worst? (I won’t go there!) 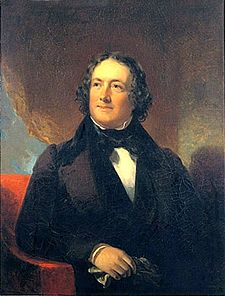 Whatever the case, once the bank closed, Nicholas Biddle, who formerly had been a president of the Bank of the United States, formed a new institution, chartered by the Pennsylvania State Legislature, called the Bank of the United States of Pennsylvania. Cleverly enough, the words “of Pennsylvania” were not used on the bank’s currency including those of face value of $1,000 or more, which to all appearances seemed to be issued by the earlier Bank of the United States! However, they are nothing more than notes of a state-chartered bank. They are interesting to collect, but few numismatists know of their history. Biddle, a leading member of Philadelphia society, did not do well as his bank was charged with fraud and failed in 1841. He died on February 17, 1844, while still enveloped in civil suits alleging misdemeanors. 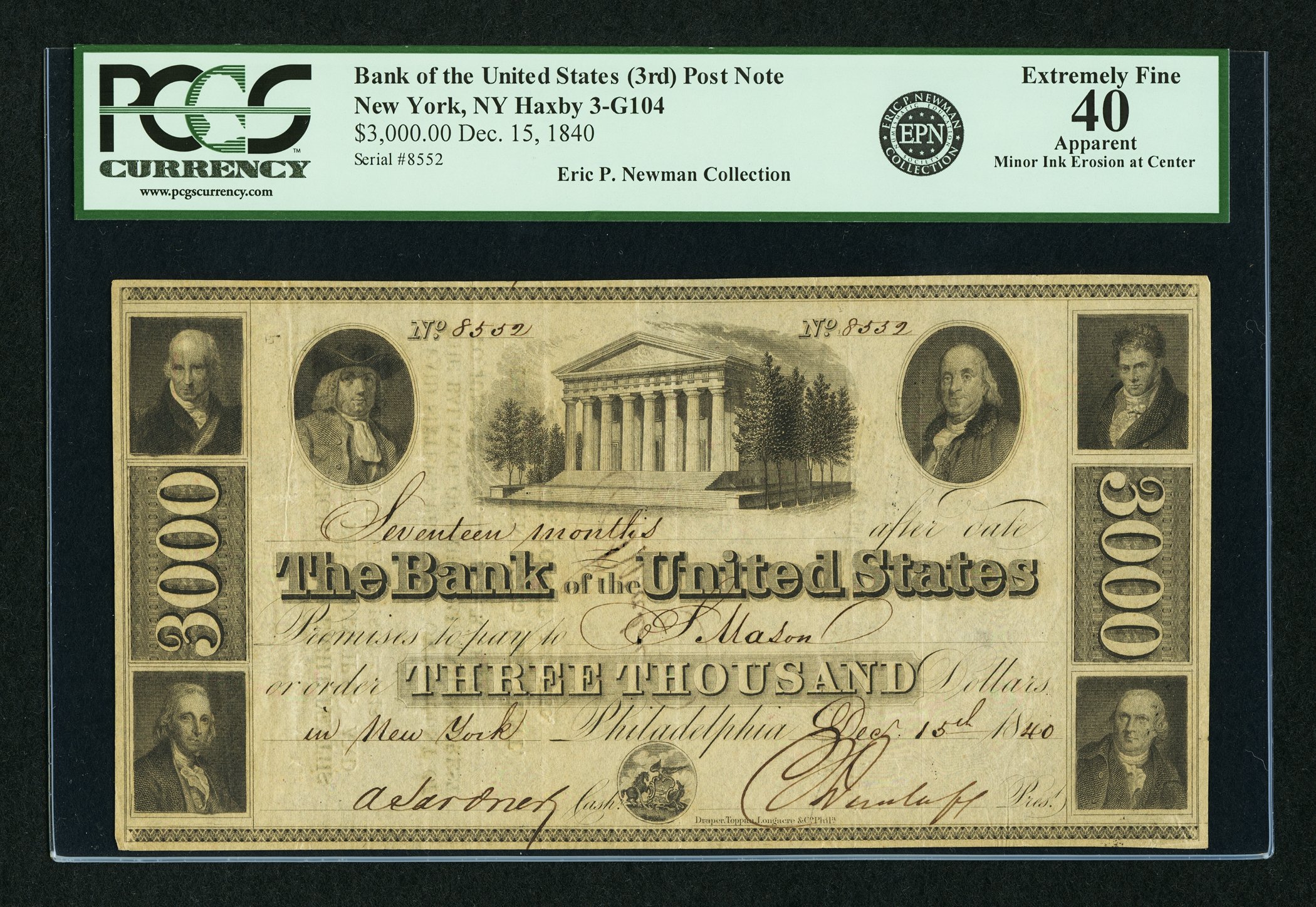 A display of the notes of Biddle’s 1836 to 1841 bank is interesting to view, as hardly any notes of denominations of $1000 or more survive from other state-chartered banks. In connection with these their history is interesting to contemplate.