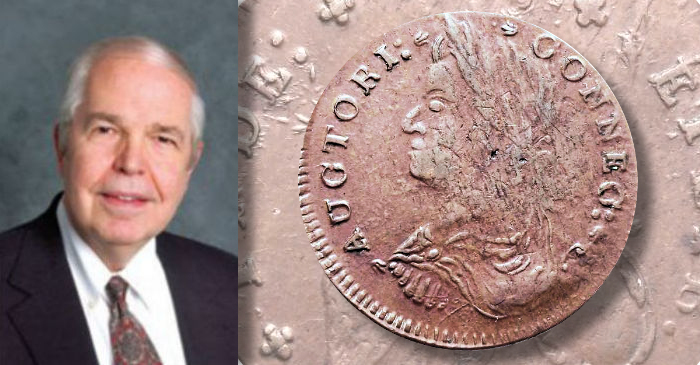 On October 18, 1785, Samuel Bishop, James Hillhouse, Joseph Hopkins, and John Goodrich petitioned the General Assembly of Connecticut to authorize the production of copper coins. They stated that there was a great scarcity of small circulating coins in the state, and those seen were apt to be counterfeits. Two days later on the 20th, they were granted the right to establish a mint under the direction and superintendence of the General Assembly, with a royalty of 1/20th part of all copper coins to be paid into the treasury of the state. 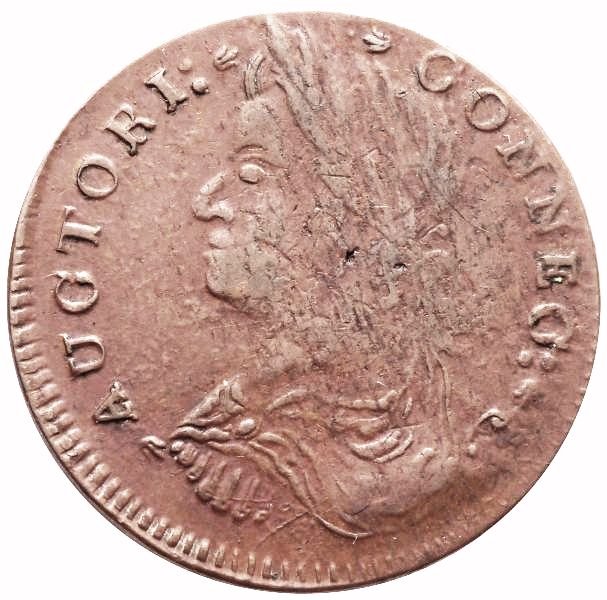 The authorization was given to coin no more than £10,000 lawful money in value of the standard of English halfpence, to weigh six pennyweight (equal to 144 grains) each, and to bear a design of a man’s head on one side with the letters AUCTORI: CONNEC: (“by the authority of Connecticut”). 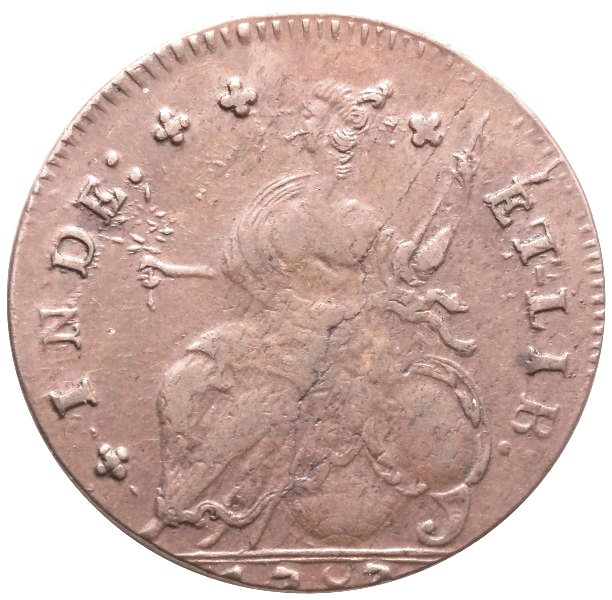 The reverse side was to depict the emblem of Liberty with an olive branch in her hand and with the inscription INDE: ET. LIB: 1785, the lettering being an abbreviation of [the Latin words for] “independence and liberty.”

Yet another condition was specifically stated: “Nothing in this act shall be construed to make such coppers a legal tender in payment of any debt, except for the purpose of making even change, for any sum not exceeding three shillings.” At the time, many regal, counterfeit, and other coppers were in circulation, including Nova Constellatio issues. The willingness of customers and tradesmen to accept them varied. Not wishing to disturb this situation, the General Assembly authorized their use as small change only. The next week, on October 24, another act was drawn up to prevent counterfeiting:

No person whatever shall coin or manufacture any copper coin of any description or size without permission…from the General Assembly on pain of forfeiting for each offense the sum of one hundred pounds lawful money.…

Counterfeiting of coins and paper money was a common crime in Connecticut and other states at the time. Gradually, the typical weight and percentage of authentic copper coins in circulation declined, leading to devaluation culminating in what historians refer to as the coppers panic of 1789. As such coins became worth a fraction of their former values, this effectively ended the era of state and related copper coinage in America.

Oversight by the state on the new coining operation was slight. In 1787 a committee was appointed to review the coinage. Likely, other reviews were held, but no information has been found concerning them. Later, in May 1789, the committee gave an overall review to the Assembly. It was related that on April 7, 1789, a meeting of the parties involved at the inception of minting was held at a private home in New Haven. Attending were Samuel Bishop, James Hillhouse, Mark Leavenworth, and John Goodrich. The history of the coinage was revealed.

On November 12, 1785, Samuel Bishop, James Hillhouse, Joseph Hopkins, and John Goodrich, the original persons named in the coinage act, entered into an agreement with Pierpoint Edwards, Jonathan Ingersoll, Abel Buell, and Elias Shipman to form the Company for Coining Coppers. Buell was an experienced plate and die engraver, and brought his expertise to the enterprise. The others were citizens of high integrity and repute, men who were important in the state. While the partners hoped to make a profit, it is likely that they also sought to benefit Connecticut by providing coins for commerce.

Inspectors from the legislature found out that 28,944 pounds’ weight of coppers was produced by the Company for Coining Coppers, with 1/20th part, or 1,477 pounds and a few ounces, being transmitted to Connecticut as a royalty. At the time the coppers passed in circulation at 18 pieces to a shilling.

No records have been located as to the extent of the Jarvis operation, or if its coinage was officially sanctioned by the state. Its main business was the production of 1787-dated Fugio coppers, and the emphasis was on trying to make as much profit as possible.

The committee further learned that Major Eli Leavenworth, apparently a relative of the other two Leavenworths earlier associated with the venture, made blank coppers in autumn 1788 and had them stamped in New York with various impressions. Some of these apparently had inscriptions relating to Connecticut, but others were of different designs.

As a general rule, the weight of these coppers declined steadily, with those of the first year, 1785, being much heavier than those of the last, 1788. Connecticut coppers, which circulated widely, were considered to be fair game for other coiners to counterfeit. In addition to unofficial coinage at Machin’s Mills, other pieces were struck outside of the state, and we know some were made in New York City.

As Connecticut coppers circulated at a higher value than certain of their contemporaries, many Nova Constellatio and some other pieces were overstruck with Connecticut designs, probably at Machin’s Mills near Newburgh, New York. As Connecticut coppers never had legal tender status to begin with, it can be argued that no laws were broken when maverick mints made their own versions. Although no single rule applies to all, it seems that in pre-federal times, those who counterfeited currency and silver and gold coins were punished

Today, over 350 die varieties and combinations of Connecticut coppers are known. A listing of the basic design types can be found in the Guide Book. The depth and breadth of the series has made it very popular over the years, not to overlook that most types are very affordable.