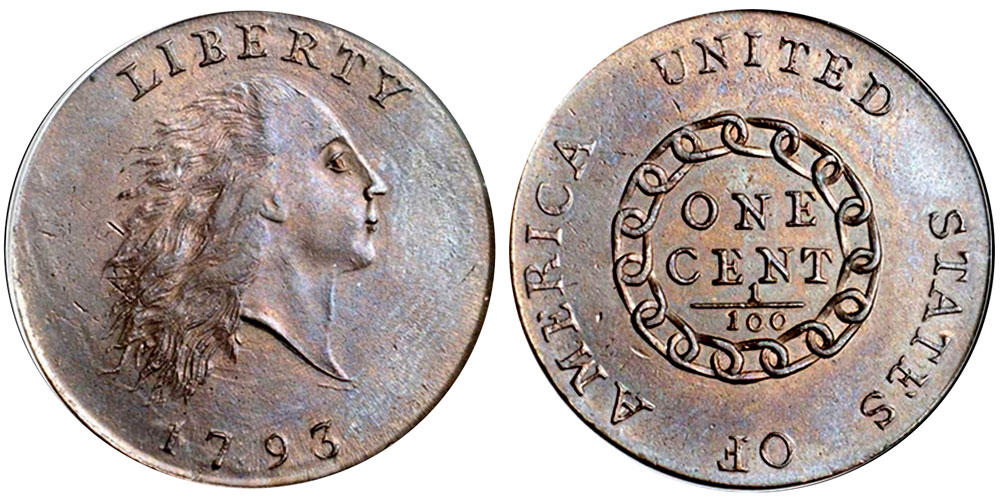 The very first United States cent variety is known today as Sheldon-1, abbreviated as S-1 by collectors, the Chain cent with AMERICA appearing on the reverse as AMERI. The engraver of this coin, fearful that the entire word would not be able to fit correctly, shortened it in this unusual manner.

It is not known who engraved the dies for the first cent. For many years it was reiterated in numismatic publications that the Chain cent was the work of Jean Pierre Droz, a Swiss, but in later years the theory was discarded. In more recent years Henry Voight has been named as the designer and possibly the engraver. In the numismatic world, one person’s opinion often is changed in print to another person’s theory, to be reprinted as a fact. Thus, many statements which appear in reference books today, items such as the identification of precise engravers with certain coins are simply opinions that may or may not conform to the facts, could they be learned.

Following the beginning AMERI. strikings, several other varieties dog Chain cents, these latter with the word AMERICA spelled out coin full, were produced. Today, collectors group AMERI. and AMERICA varieties together as a general design type.

The reaction of the public to the 1793 Chain design was unfavorable. One newspaper account noted that Miss Liberty appeared to be “in a fright” and that the depiction of a chain on the reverse was “but an ill omen for liberty” and was scarcely emblematic of a country which had just gained its freedom. Soon, Mint officials directed that a new design be prepared. A Guide Book of United States Coins estimates that 36,103 examples of the Chain cent design were struck.

Today Chain cents are highly desired. Several hundred specimens exist of the various die varieties. Typically, pieces seen are in lower grades, ranging from Fair (sometimes with just the central devices on the obverse and reverse visible, the date long since having been worn away) to Fine. The relief of the dies was such that even higher grade examples tend to look much more worn than they actually are. Often a piece will have a relatively sharp reverse, particularly the chain motif, but the obverse will be quite weak and indistinct at the center. Very Fine and Extremely Fine Chain cents are encountered when major collections come on the market. A few scattered Uncirculated pieces exist and are objects of desire, mostly unrequited, by specialists in the series, even those with the most generously endowed checking account balances. The acquisition of such a piece is related more to opportunity than to financial ability.