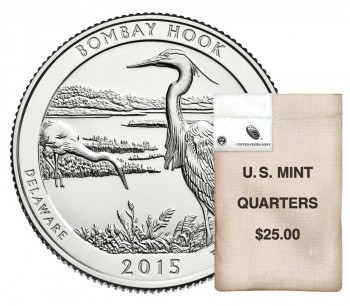 The U.S. Mint is now selling rolls and bags of the new 2015 Bombay Hook America the Beautiful quarter, first launched on September 14.

The Bombay Hook reverse features a great blue heron in profile with a great egret in the background, bending toward the marsh. Inscribed along the coin’s rim are BOMBAY HOOK, DELAWARE, 2015, and E PLURIBUS UNUM. A U.S. Mint press release notes that the design was chosen in consultation with representatives of the wildlife refuge. 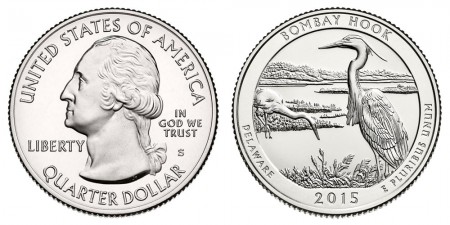 The Bombay Hook quarter is the 29th release in the American the Beautiful program, which plans to issue a total of 56 designs at a rate of 5 per year until the series concludes in 2021. The Bombay Hook Quarter 3-Coin Set and the Bombay Hook 5 oz. Silver Uncirculated Coin will be released in early October, with the last ATB issue of 2015, Saratoga National Historic Park, scheduled for release in late November.

For more information, visit the U.S. Mint’s page for the America the Beautiful Quarters Program. You can also take a look at rough footage from the production of the Bombay Hook quarter below.