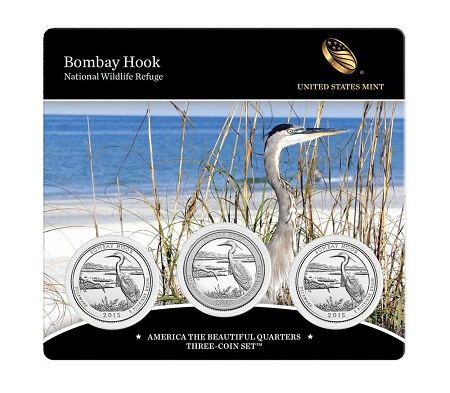 Today, October 6, the U.S. Mint released the 2015 Bombay Hook National Wildlife Refuge Three-Coin Set. The set is available for $9.95; it includes two Uncirculated quarters that were respectively minted in Philadelphia and Denver, and one Proof quarter minted in San Francisco. There are no stated limits on availability or orders per household at this time.

The Bombay Hook design is the fourth of five America the Beautiful designs to be issued in 2015. It was first issued as a circulating quarter on September 14, with a reverse featuring a great blue heron, a great egret, and the inscriptions BOMBAY HOOK, DELAWARE, 2015, and E PLURIBUS UNUM. The Bombay Hook quarter is the 29th release in the America the Beautiful program, which plans to issue a total of 56 designs at a rate of 5 per year until the series concludes in 2021. The quarters are presented in a plastic card that features a picture of the Bombay Hook wildlife refuge, along with information on both the site and the coins. A Certificate of Authenticity is included on the back of the card. 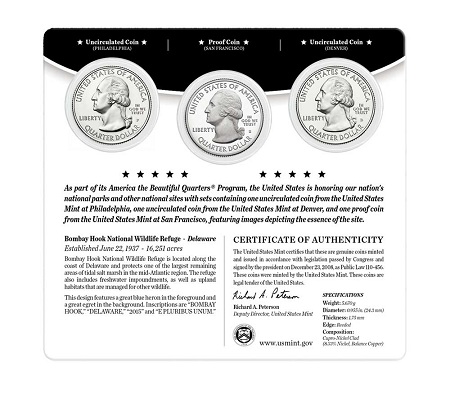 The 3-coin set is one of several new products showcasing the Bombay Hook ATB quarter. Last week, the Mint released bags and rolls containing bulk quantities of circulating coins, while authorized purchasers quickly acquired the total 45,000-piece mintage of the Bombay Hook 5 oz. silver bullion coin. An Uncirculated issue of the 5 oz. coin will be released by the Mint later this week.