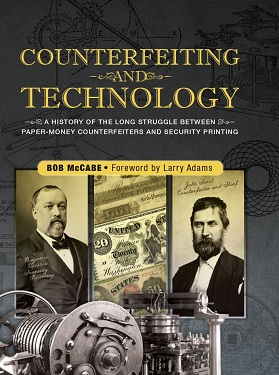 This winter, the long-anticipated story of paper-money counterfeiting by historian Bob McCabe will make its debut. Counterfeiting and Technology: A History of the Long Struggle Between Paper-Money Counterfeiters and Security Printing is an adventurous monument to the history of paper money and, most importantly, to the technology that created it.

At the ANA’s World’s Fair of Money in Rosemont, Illinois, last year, I had the privilege of attending a Society of Paper Money Collector’s meeting, during which a presentation on Confederate paper money was delivered. Afterward the floor was opened to a Q&A session, during which one particular question caught my ear: “When will a book on the history of counterfeiting in America be released? Nothing like that really exists right now.” At the time Counterfeiting and Technology was in production with Whitman Publishing, and I could barely contain my excitement as I answered the question, stating that the release of just such a book would be forthcoming in the following year.

McCabe has dedicated two decades to the creation of this text, falling in line with the requirements of bank-note creation: to produce the “highest form of the art.” Author Daniel Stadtfeld says of the book: “This author has gone to extreme lengths to try to present the most accurate account possible. Robert McCabe is an individual that will not settle for anything less than the truth in its best available form.”

Collectors, historians, and researchers will certainly not be disappointed. Within Counterfeiting and Technology are tales spanning from the first paper money ever known to be printed during China’s Tang dynasty to the technology’s journey from East to West. Readers will learn step-by-step about the art and advancement of line engraving, mechanical engraving, paper-making, ink-making, natural anti-counterfeiting measures, and the modern security printing that goes into making bank notes what they are today. At the same time, the text is rich with daring heists, escapes, and manhunts as the battle between counterfeiters and authorities grew more and more complex with the technology at hand.

While the chemistries and inner-workings of printing are laid out alongside diagrams of printing presses through the ages, this is not a tale exclusively for the scientifically minded—although those searching for scientific analysis will not be in want. The book is bisected into processes and people, the art of paper making, and those who did the work. Machines and chemistries related to paper making are carefully explained so that their functions are easily understood, bringing a whole new life to the paper we use on a daily basis. The advancements that finally led to the bank-note–company era, particularly in England and in the United States, are brought forward so that their contributions too can be listed, from small companies to the large “merger” of the American Bank Note Company after 1858.

Running parallel to the analysis of the technology and chemistries involved are stories and histories of the counterfeiters who perpetrated the work, as well as those who strove to stop them. The evolution of the Secret Service and the Bureau of Engraving and Printing is covered, as are undercover investigations, bold court defenses, and unbelievable and even humorous escapes. Fraudsters, mostly unknown or unrecognized for their own dishonest cleverness, are finally brought to light by portraits from the National Archive and the U.S. Secret Service Archives. These rarely-before-seen criminals are placed alongside pictures of Bureau and Secret Service directors, as well as full-color illustrations of the time.

Any student of paper money should have this book to better understand the very foundation of the pieces of history they collect. Author McCabe states: “There are both villains and heroes in this story, and each played a role in advancing the technology of paper money. I think there is a real need for a single-reference work that sets down the basic facts of how the bank-note industry was created and evolved in the last century to become a sophisticated technology producing notes of high artistry.”

McCabe continued: “Not only did I visit most of the major libraries in the Eastern states, including the Library of Congress, I also met an ex-Navy officer who took me into the basement of the Confederate Museum to see what was left of one of the presses that was used to print Confederate currency during the rebellion. While in New York, I learned to play one library against another, because no one place has all the ‘good stuff.’ The New York Public Library has a print-room to die for, and the National Union Catalog, which helps to plan your visits to other libraries, but the Historical Society of Pennsylvania was the most surprising and rewarding discovery. It holds many of the 18th- and early 19th-century documents I was searching for, and I returned the next year to dig for even more treasures. Start with what you can get and build on that knowledge. Answer the questions your readers will want to know. And don’t hesitate to put ink to paper.”