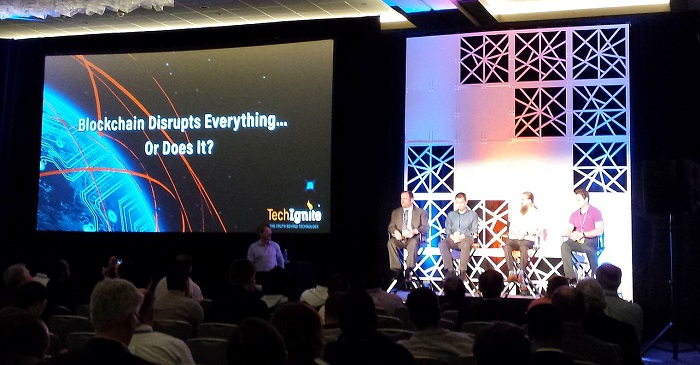 Consultant Josh Greenbaum moderates the “Blockchain Disrupts Everything. . . or Does It?” panel discussion at the first IEEE Computer Society TechIgnite conference. Panelists are (from left to right) Mitchell Parker, Bryan Smith, Tim Adams, and Nelson Patrecek. Photo by DanielPenfield.

The following is an excerpt of an article by Larry D. Wall on the Federal Reserve Bank of Atlanta.

A blockchain is a type of distributed database that is being touted as likely to dramatically restructure a wide variety of activities, including accounting, payments, personal identity, property records, and even voting. Yet in practice, the use of blockchains tends to be limited to proof of concept and small-scale production. One blockchain-based application has had some success in displacing more traditional methods of finance, initial coin offerings (ICOs). However, ICOs’ success appears to be less related to any superior feature of the blockchain and more to its ability temporarily to avoid compliance with securities regulation.

The gap between the blockchain-enabled disruption envisioned by some, and the rather limited usage of blockchain in practice, is due to a variety of factors. One major factor is that many of the proposed blockchain use cases require coordination across different organizations that often have very different objectives and incentives. However, another important factor is that there is no single way of implementing blockchains, and the existing implementations are still immature in many respects. This raises the important question of how to move to implementations that could actually prove transformative. Looking into the future, a similar question arises as to how particular blockchain implementations evolve to meet changes in technology, user needs, regulation, and other developments.

This post is the first of a two-part series related to blockchain evolution. This first part provides a high-level discussion of the workings of blockchain technology and some of the related challenges. The second post will discuss how to change blockchain implementation with a focus on governance.

What is Blockchain Technology?

As with some other terms used in technology, there is no single agreed upon definition of a blockchain. For our purposes, Wikipedia provides a good definition: “A blockchain. . . is a continuously growing list of records, called blocks, which are linked and secured using cryptography.” Although blockchain technology builds on some prior work, the first blockchain is attributed to a paper by Satoshi Nakamoto. Nakamoto’s intent was to develop an “electronic cash” called Bitcoin that could be sent from one party to another without relying on a third party and without creating the risk of “double spending,” or the same cash being promised to two different parties.


The critical contribution of the Bitcoin blockchain was it provided a way readily to identify any attempt to change any prior block (set of transactions). The blockchain does this by creating a “cryptographic hash,” or unique digital summary, for each block that includes the hash from the prior block. If even the smallest change is made to any given block, it will alter that block’s hash and the change will carry through to every block subsequently added to the blockchain. (This occurs because the prior block’s hash is part of each block in the chain.) Thus, if one wants to rewrite the history of one block (such as to take a payment originally sent to Jane and instead send it to John), then every subsequent block will have to be revised. Otherwise, anyone seeking to verify the blockchain will be able to tell that an effort has been made to change one of the blocks.

Another key part of the Bitcoin blockchain is that in order for someone to add a block to the blockchain, he or she must first solve a cryptographic problem that is difficult and expensive to answer, but where it is low cost to verify that answer. The people who solve such problems, called miners, are compensated for their work by receiving new Bitcoins from the blockchain program (and sometimes also from payments by people who want timely execution of their transaction). The benefit of such a costly proof-of-work process is that it raises the cost and difficulty of attempting to rewrite history. Anyone attempting to rewrite history without detection must have the capacity to write new blocks faster than they are being created by the rest of the Bitcoin mining community.

A potential problem for a proof-of-work blockchain is that two or more miners will sometimes simultaneously solve the cryptographic problem and write out a new block. Bitcoin resolves this problem by designating the longest chain as the definitive one. This solution means, however, that transactions recorded on the shorter chain are discarded as if they never happened. Thus, a widely quoted rule of thumb on Bitcoin is to wait for six blocks before regarding a transaction as being confirmed.

Given the difficulty of changing prior blocks, blockchain enthusiasts like to promote blockchains as providing tamperproof, immutable records. However, these claims are subject to qualification and are not necessarily a virtue in all use cases. The claim that blockchains are tamperproof and immutable is not based on the argument that changing the records is technically impossible but rather that the costs of rewriting all subsequent blocks would likely exceed the economic benefits. However, as a paper by St. Mary’s professor Angela Walch observes, the underlying code in both Bitcoin and Ethereum (another major blockchain) have been changed in ways that effectively abandoned what had been legitimately entered records.

Moreover, the argument that it would be uneconomical to attack (try to alter) a blockchain is subject to some substantial qualifications. University of Chicago professor Eric Budish (2018) provides an analysis of the economics of attacking a blockchain that relies on proof of work and concludes that “the model suggests that Bitcoin would be majority attacked if it became sufficiently economically important…which suggests that there are intrinsic economic limits to how economically important it can become in the first place. . .”