On October 13, 2011, Rep. Robert Brady of Pennsylvania introduced a bill in the House of Representatives which seeks to require silver dollars to be issued in commemoration of the legacy of the U.S.S. Cruiser Olympia. 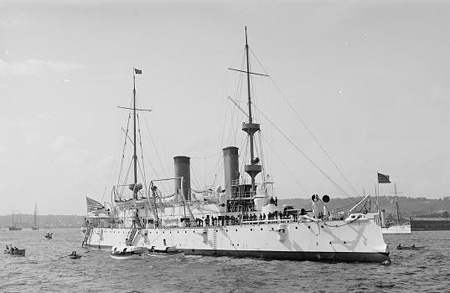 The U.S.S. Olympia was commissioned on February 5, 1895 and was the flagship of Commodore George Dewey at the Battle of Manila Bay during the Spanish-American War. The ship became famous for its victories during the war and was decommissioned after returning to the United States. The Olympia returned to active service in 1902 and served in World War I and was honored to carry the first American unknown solider from the port of Le Havre, France, to Washington, DC. In 1966, the Olympia was designated as a National Historic Landmark.

The Bill H.R. 3180 U.S.S. Cruiser Olympic Commemorative Coin Act would require the Secretary of the Treasury to mint and issue up to 500,000 silver dollars with designs “emblematic of the courage, pride, sacrifice, sense of duty, and history of the U.S.S. Cruiser Olympia.” The coins would be struck in 90% silver and 10% copper with a weight of 26.73 grams and diameter of 1.5 inches.

Both proof and uncirculated quality coins would be minted, which may only be issued during the calendar year beginning on January 1, 2016.

Selection of the final designs appearing on the coins would be made by the Secretary of the Treasury, following consultation with the Friends of the Cruiser Olympia, the Commission of Fine Arts, and review by the Citizens Coinage Advisory Committee.

The price of each coin would be determined based on the face value of the coins, the cost of designing and issuing the coins, and a $10 surcharge distributable to the Friends of the Cruiser Olympia. The funds would be used for the purpose of restoring and preserving the ship.

In order to become law, H.R. 3180 must be passed by the House of Representatives and Senate, and signed by the President. The bill currently has 14 cosponsors and has been referred to the House Committee on Financial Services.