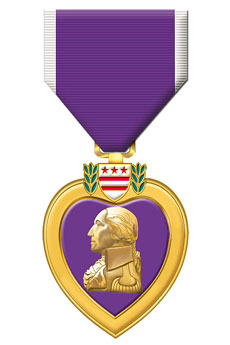 Earlier this month, Rep. Sean Maloney of New York introduced a bill which seeks to require the Secretary of the Treasury to mint and issue coins in commemoration of the National Purple Heart Hall of Honor.

The Purple Heart is awarded in the name of the President to members of the United States armed forces who are wounded or killed while serving. The National Purple Heart Hall of Honor, which first opened its doors on November 10, 2006, recognizes more than 1.7 million service members wounded or killed in action from the Revolutionary War to the present day. The Hall is located at the New Windsor Cantonment State Historic Site in New York, where General George Washington first awarded the Bade of Military Merit, a piece of purple cloth that became the model for the Purple Heart.

The bill H.R. 358 calls for the issuance of up to 50,000 $5 gold coins, 400,000 silver dollars, and 750,000 clad half dollars with designs emblematic of the National Purple Heart Hall of Honor. The final designs would be selected by the Secretary of the Treasury after consultation with the Commission of Fine Arts and review by the Citizens Coinage Advisory Committee.

The coins would be issued in proof and uncirculated qualities. The bill provides that only the West Point Mint may be used to strike the coins issued under the Act. Furthermore, the coins may only be issued during the one year period beginning on January 1, 2017.

Currently, the bill has no cosponsors and has been referred to the House Committee on Financial Services. In order to become law, the bill must be passed in the House and Senate, then signed by the President.