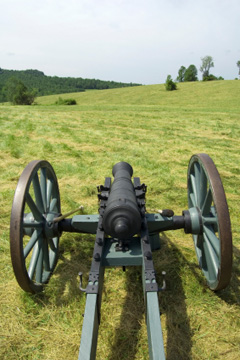 A bill recently introduced in the House of Representatives seeks to require the Treasury of the Secretary to mint and issue coins in commemoration of the battlefields of the Revolutionary War and the War of 1812. The program would include $5 gold coins, silver dollars, and clad half dollars.

The specifics of the current bill call for up to 300,000 $5 gold coins, up to 1,000,000 silver dollars , and up to 2,000,000 clad half dollars to be produced with designs emblematic of the Revolutionary War and the War of 1812. Each coin would be minted in uncirculated and proof qualities, with only one facility of the United States Mint used to strike any particular quality of the coins.

The bill specifies that the coins may be issued only during the one year period beginning on January 1, 2013. This time frame seems problematic since under current rules, only two commemorative coin programs may be approved per year. Congress has already authorized two programs for 2013 featuring the Girl Scouts of the United States of America and the United States Army Five Star Generals.

Other requirements of the bill include surcharges of $35 per gold coin, $10 per silver dollar, and $3 per half dollar to be added to the sales price of the coins. These surcharges would be distributed to the Revolutionary War and the War of 1812 Battlefields Foundation for the preservation of historically significant battlefields and related historical sites.