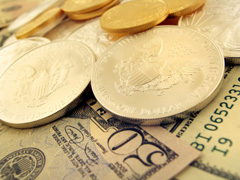 The Commodity Futures Trading Commission (CFTC) are supposed to be close to issuing regulations on limiting positions that traders can hold in the COMEX gold, silver, and other commodity markets.  At their meeting last Thursday, CFTC Chair Gary Gensler announced that they would be unable to complete a set of regulations by the statutory due date.

CFTC Commissioner Bart Chilton urged that spot month position limits be regulated sooner than limits for future month contracts.  The unorthodox meeting, where the Commissioners recessed to meet privately for a time before returning to announce that the delay in issuing proposed regulations, showed signs that the Commissioners have not reached a consensus on what to do about issuing regulations as required by the Dodd-Frank financial reform law.  The next CFTC meeting is January 13.

In a December 13 letter to Chilton, analyst Adrian Douglas drew attention to the fact that even as US banks have been reducing their COMEX gold and silver market short positions over the course of 2010, foreign banks that are exempt from CFTC regulations have been increasing their short sales.  In the silver market, the new shorts positions from foreign banks over the past five months have more than offset the decline in US bank short positions, so that total short positions continue to rise.  You can review a copy of Douglas’s letter to Chilton at https://marketforceanalysis.com/article/latest_article_112010.html.

At last Thursday’s CFTC meeting, Chilton repeated Douglas’s comments, with the implication that it looks like US banks are trying to hide their short positions by moving them behind foreign fronts.

The mainstream media have refused to investigate or even speculate which large banks might have the huge short gold and silver positions reflected in the monthly COMEX bank position reports.  It was widely suspected that JP Morgan Chase held the largest silver short position, but you had to find that out in places other than the mainstream media.

Within the past two weeks, starting with a story in London’s Financial Times, the mainstream media has been proclaiming that JPMorgan Chase has substantially reduced their silver short positions on the COMEX, though Bill Murphy of the Gold Anti-Trust Action Committee suspects that this bank’s short position has only declined from about 150 to 125 million ounces.

What the mainstream media has totally missed is the increase in the foreign bank short positions.  As a result of this skewed coverage, the general public probably thinks that the COMEX gold and silver short positions are being resolved (even though, according to their lack of media coverage, this was never a “problem” in the first place).

It doesn’t matter how much the mainstream media (by only reporting half of the story) and the US government’s major trading partners try to hide what is really happening in the gold and silver markets by shifting short positions to banks beyond the CFTC regulatory reach.  The truth is that supplies of physical gold and silver continue to dwindle at the same time that demand is soaring.  Even though gold is up about 25% and silver 75% so far in 2010, something has to give.  In my judgment, I think gold and silver prices will rise by even greater percentages in 2011.  You have been warned.