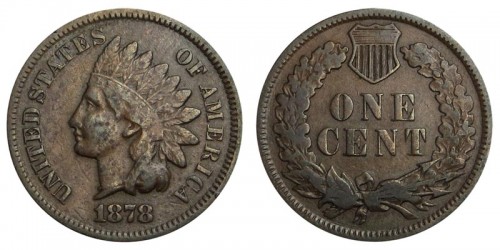 Counterfeits were once a great detriment to the enjoyable pursuit of coin collecting. Throughout the 1950s until the mid-1970s, collectors had a good chance of buying a counterfeit if they strayed from traditional sources for their coins. The average collector was mostly ignorant about counterfeit detection, and there was nowhere to turn for protection.

Venues not typically known for numismatic expertise (such as flea markets, estate auctions, and garage sales) were places where counterfeits could easily be found. At the typical coin show, counterfeits were offered knowingly by what one might call “fly-by-night” dealers, who gave no invoice and had no permanent place of business. Other established coin dealers may have unknowingly offered counterfeits as well. While the established dealers may have had more regard for their reputation and would probably refund the cost of a counterfeit if asked, it was still up to the collector to discover the counterfeit. It was buyer beware!

In the early 1970s Vigil Hancock, president of the American Numismatic Association from 1975 to 1977, along with noted collector John Jay Pittman and dealer Abe Kosoff, took on the problem of counterfeits in the marketplace. Together they created the ANA Certification Service, with Charles R. Hoskins as director. The sharing of knowledge of counterfeits made collectors aware of the extent of the problems. Coins that were commonly counterfeited were now issued authentication papers from ANACS. This slowed the traffic of counterfeits within the hobby, but they still were easily sold to inexperienced collectors looking for bargains.

The authentication of coins evolved into the certification of grades as well. This change to certified grading, with its automatic guarantee of authenticity, has been the main reason that the coin-collecting hobby has grown dramatically in recent decades. Encapsulated grading (commonly called slabbing today) in 1986 was the idea that changed the coin hobby forever. Now, in addition to a guarantee of authenticity, there was a tamper-proof holder to ensure the coin’s legitimacy. Today’s collector who buys certified coins from established dealers or auction companies is assured of protection from buying counterfeits.

However, with the advent of Internet auctions, counterfeits are again being sold to the unwary. It is wise to be very cautious when buying uncertified coins from people you may not be able to locate later. If the bargain coin you bought turns out to be fake, there may be little recourse if the seller is in, for example, China.

The following examples are just a sampling of the pieces that have fooled collectors over the years. The Flying Eagle and Indian Cent Collectors Society (the Fly-In Club) maintains a “Counterfeit Library” of many of these coins, available for members to borrow as they would a book from a library. 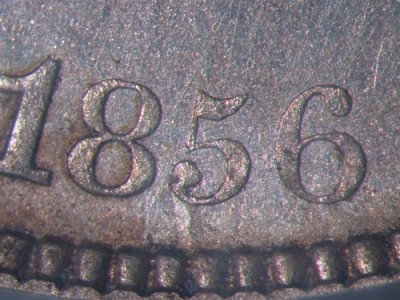 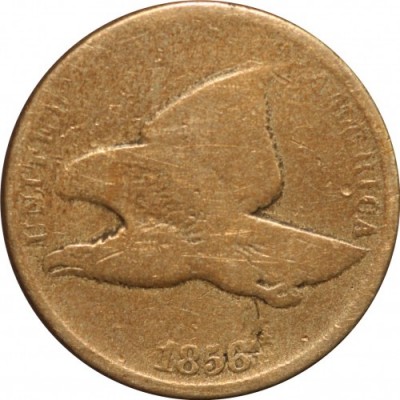 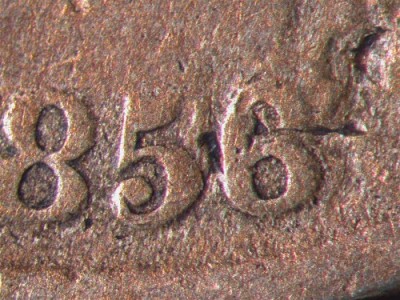 Most counterfeits were made to deceive collectors, so the scarcer dates are usually the target of counterfeiters. Many real coins are altered to look like a more valuable date.

A common alteration is made by taking an 1858 Flying Eagle cent and changing the date to look like 1856. This is usually easily detected if you know the diagnostics and features of a real 1856 cent. Most alterations are made from lower-grade 1858 cents and may be artificially worn or corroded to hide the alteration work. The majority of 1856 cents grade VF or better, so the offering of a low-grade example is reason enough to be suspicious. Additionally, a quick check to see if the letters in the legend are not of the Small Letters style (used only in 1858) may eliminate an alteration. The digits of the genuine 1856 are much different from the digits on the 1858, especially in the shape of the 5. Genuine 1856 cents show the upright of the 5 pointing directly at the center of the ball at the end of the bottom loop. 1858 cents all have it pointing to the left of the ball.

A spark erosion counterfeit is made by transferring an image of a real coin to a die, by way of an electric current. The die is immersed in an electrolytic bath with the host coin held a slight distance off its face. As a current is passed between the coin and the die, tiny pits are etched into the die. The die is then polished to remove as much of the pitting as possible. By their nature, these coins are not difficult for moderately experience collectors to spot. They usually have polished fields, and heavy pitting around and on the devices. The edges are normally very sharp, like those of a Proof issue. 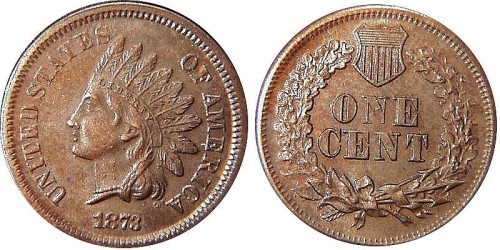 The 1873 counterfeit pictured is a very crudely made piece. Aside from the numerous raised pimples covering the coin, it may be noticed that it has a Shallow N reverse, a feature not known on genuine coins made this year. 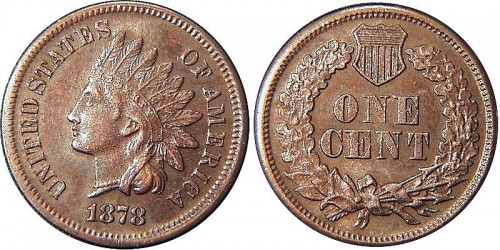 The transfer die counterfeit is made by creating dies by directly transferring the design from a host coin. This is done by impacting the coin, and destroying it in the process, with a soft metal die. These counterfeits can be quite deceptive, if care is taken in making the dies. Knowledge of the characteristics of genuine coins will help identify possible counterfeits.

If all the details of the host coin get transferred to the die, so will any defects, such as contact marks. These will show up as depressions on all of the counterfeit coins made from this die. Unlike those on genuine coins, the depressions will have the same surface qualities as the surrounding areas of the coin. By noting the position of the depressions on multiple coins, you can identify counterfeits. 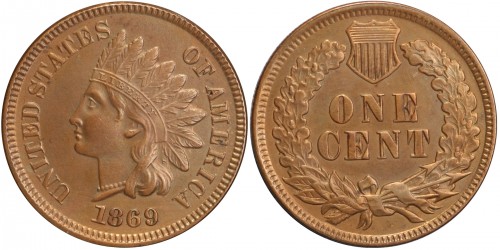 The 1869 cent above is obviously fake because it has a Bold N reverse, which was not used until the next year. If it were not for this oversight, this coin would probably remain undiscovered in many a collection. 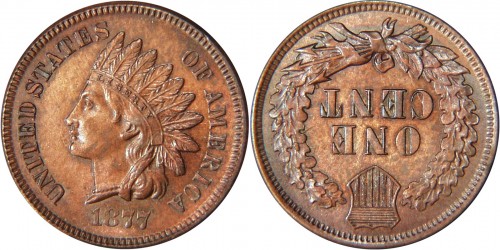 The 1877 counterfeit shown here is very close to perfection. The obverse carries all the diagnostics of the genuine Mint State 1877 coin. The reverse features the Bold N, which is found only on the Proof of this year. Additionally, the reverse is rotated in medal alignment, top to top, rather than the usual coin alignment of top to bottom. While unusual alignments are not immediately reason to condemn a coin, on the 1877 cent it is definitely cause for concern. Perhaps the counterfeiter lives in Canada, where medal alignment is natural on the coins in circulation.

This article is condensed and excerpted from Appendix B: Counterfeit and Altered Coins, in A Guide Book of Flying Eagle and Indian Head Cents.