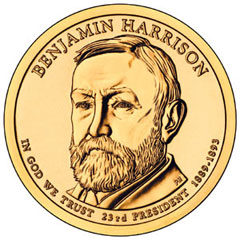 The United States Mint has started accepting orders for the latest release of the Presidential $1 Coin Program featuring Benjamin Harrison. He served as the 23rd President of the United States for a single term from 1889-1893.

The obverse of the Benjamin Harrison Presidential Dollar was designed and sculpted by Phebe Hemphill and features a portrait of the former President. Inscriptions include “Benjamin Harrison”, “In God We Trust”, “23rd President” and “1889-1893”. The reverse of the coin carries a rendition of the Statue of Liberty designed by Don Everhart and used for each issue of the series. The inscriptions include “United States of America” and “$1”. The additional inscriptions “2012”, “E Pluribus Unum”, and the mint mark are incused on the edge.

Late last year, the Treasury Department announced that the production of Presidential Dollars for circulation was suspended. Starting with the first 2012-dated release honoring Chester Arthur, only the limited number of coins would be produced to fulfill demand from collectors. These coins would not be released for general circulation, but sold at a premium within numismatic products offered by the United States Mint.

Initially, the Mint projected demand of 5 million coins for each design, however collector orders have been running in excess of this amount. So far, more than 7.5 million Chester Arthur Dollars and almost 6.3 million Grover Cleveland Dollars have been purchased by collectors.

The next release of the series for Grover Cleveland’s second term as President is scheduled for release on November 15, 2012.