The United States Mint has released (September 18th) the 23rd release within the American Presidency $1 Coin Cover series featuring Benjamin Harrison. This product allows collectors to purchase the $1 coins sourced from the first day of production. 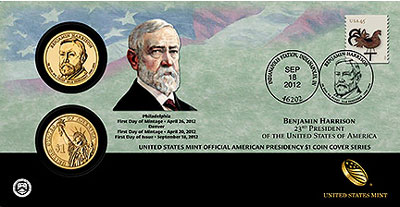 The Benjamin Harrison Presidential Dollar features a portrait of the former President designed and sculpted by Phebe Hemphill. Inscriptions indicate his name, the order of the Presidency, the years of the term, and the motto “In God We Trust”. The reverse of the coin features a rendition of the Statue of Liberty designed by Don Everhart.

The Coin Cover includes $1 coins from the first day of production at the Philadelphia Mint on April 26, 2012 and the Denver Mint on April 20, 2012. These are mounted on a display card and placed within an illustrated envelope containing a postage stamp with a post mark of September 18, 2012, Indianapolis, IN.