In 2006, the 300th anniversary of the birth of Benjamin Franklin was celebrated with the issuance of commemorative silver dollars struck by the United States Mint. As part of the program, the Mint offered the Benjamin Franklin Coin & Chronicles Set, which contained materials relevant to Franklin’s achievements as a printer, inventor, scholar, scientist, and diplomat.

The program was authorized under Public Law 108-464, which required the issuance of up to 500,000 silver dollars in commemoration of the tercentenary of the birth of Benjamin Franklin. The law took the uncharacteristic approach of requiring the minting and issuance of two differently designed silver dollars, each with a mintage of not more than 250,000 pieces. The first coin was to feature a younger image of Franklin with the reverse containing an image related to his role as a patriot and statesman. The second coin was to contain an image of Franklin as an older man with the reverse design related to his role in developing the early coins and currency of America. 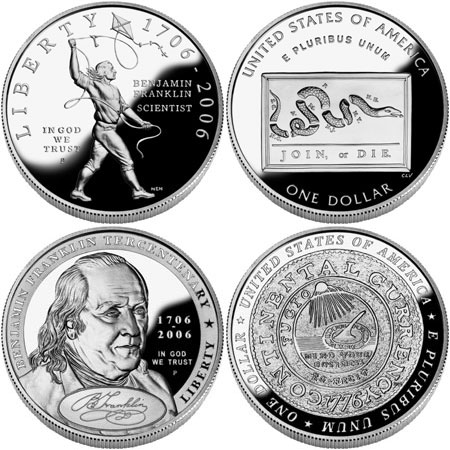 The silver dollar featuring the younger image of Franklin would be referred to as “Scientist” and feature an image of him flying a kite, representing his experiments with electricity. The reverse featured Franklin’s cartoon with a snake cut apart and the caption of “Join, or Die”. The silver dollar featuring the older image would be referred to as “Founding Father” and feature a head and shoulders portrait with a reproduction of his signature. The reverse contained a copy of a 1776 Continental Dollar surrounded by modern lettering.

The United States Mint began accepting orders for the individual proof and uncirculated versions of each silver dollar on January 17, 2006. Sales began for the Benjamin Franklin Coin & Chronicles Set on the same day, although shipping for the product was not expected to begin until April 2006. 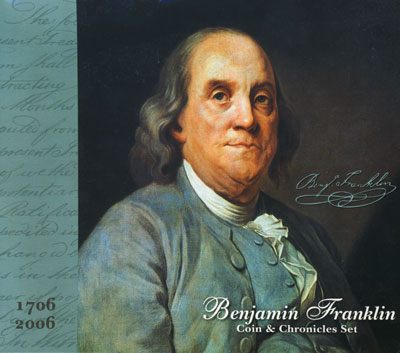 The special sets contained a combination of items brought together from the United States Mint, the Bureau of Engraving and Printing, the U.S. Government Printing Office, and the United States Postal Service. The variety of objects paid tribute to Benjamin Franklin’s many accomplishments and contributions across various fields. 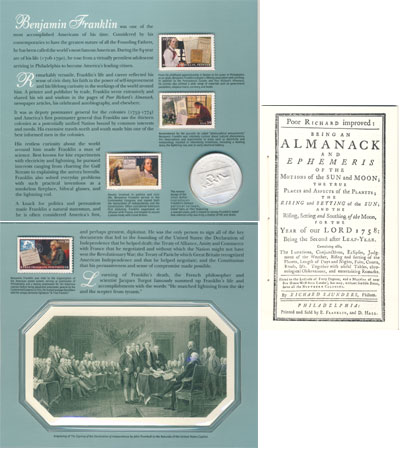 Each set included the uncirculated version of the “Scientist” silver dollar from the United States Mint; a set of four postage stamps showcasing Franklin’s accomplishments as a printer, scientist, statesman, and postmaster from the United States Postal Service; an intaglio print honoring Franklin’s role in the creation of the Declaration of Independence from the Bureau of Engraving and Printing; and a reproduction of the 1758 edition of Poor Richard’s Almanack from the U.S. Government Printing Office.

The Benjamin Franklin Coin & Chronicles Set was priced at $65.00 and limited to 50,000 units with an ordering limit of 10 units per household. The special sets as well as the commemorative program proved to be successful from a sales standpoint.

Individual sales would reach 142,000 proofs and 58,000 uncirculated coins each for both the “Scientist” and “Founding Father” designs. The Coin & Chronicles Set added another 50,000 in sales for the uncirculated “Scientist” silver dollar. The 2006 American Legacy Collection released later in the year would contribute 50,000 in sales for the proof version of the “Founding Father” silver dollar. Altogether the products accounted for the full 500,000 maximum mintage authorized for the program.