The Royal British Mint has created a crown-sized medallion to commemorate the new production of Ben Hur Live. This is the first time the Royal Mint has commemorated a theater performance. The new medal will also celebrate the 50th anniversary of the 1959 film Ben Hur, starring Charlton Heston and widely regarded as one of history’s greatest cinematographic feats. 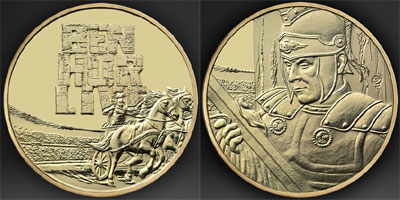 Dave Knight, the Royal Mint’s Director of Commemorative Coins, said: “At the Royal Mint we have always prided ourselves on marking important anniversaries and public events. Both Ben Hur, the 1959 film, and Ben Hur, the live show are in their own rights, events of great significance and relevance which will continue to be of great interest to the public and remembered in years to come. The Ben Hur medal is a fitting tribute to both.”

The medallion is designed by Matthew Bonaccorsi, the Royal Mint’s Chief Engraver. It features an image of a chariot racing around the arena with the Ben Hur Live logo on the obverse, and a portrait of Ben Hur on the reverse.

Only 50,000 of these exclusive Ben Hur Live medallions will be made, with the first four medals struck being presented to the Producer, Franz Abraham and lead cast members, Sebastian Thrun, ‘Ben Hur’; Michael Knese, ‘Messala’ and Lili Gesler, ‘ Esther’. Each medallion is made from cupro-nickel, struck to Brilliant Uncirculated standard, and priced at £9.00. The medals come in a complementary display folder.