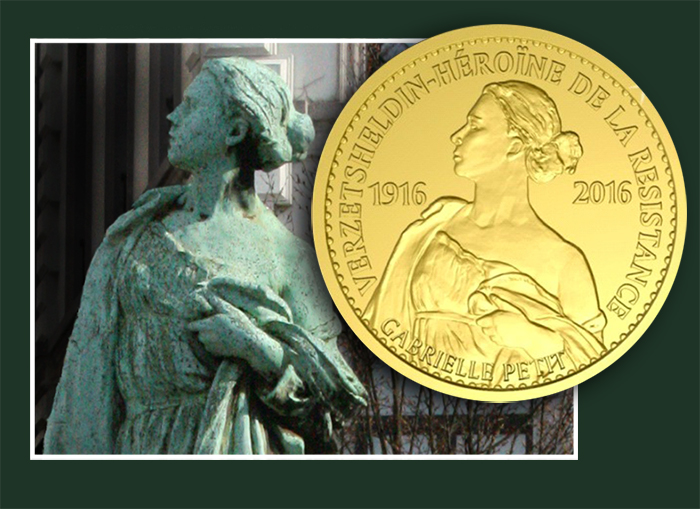 (Photo of statue by Michel Wal)

The Royal Belgian Mint have issued a new gold coin that pays homage to a young woman who is regarded as one of Belgium’s heroines. Gabrielle Petit (1893–1916) lost her life during the Great War as a spy for the British Secret Service. A Belgian woman, she was recruited by British intelligence to provide vital information about Imperial German troop movement as well as their numbers and locations. She is remembered for her services to the war effort.

The coin’s reverse design depicts Petit as seen from the statue dedicated to her memory in 1923. The years 1916 and 2016 are placed on either sides of Petit’s effigy. The text VERZETSHELDIN – HÉROÏNE DE LA RÉSISTANCE appears along the upper edge of the design, with GABRIELLE PETIT appearing below the design.

The obverse design includes the denomination of 100 EURO, which is placed to the left of the map of Europe. The three versions of the country’s name (Belgique, Belgie, and Belgien) appear below the map as a typographic composite: BELGI with the three suffixes—QUE, E, and EN—stacked at the end. The mintmark of the new Belgian mint master appears just below the year of issue.

Each coin is enclosed in a Perspex or Lucite capsule and placed within a polished-wood, custom-branded presentation case. For more information on this and other coins offered by the Royal Mint of Belgium, please visit their website. International orders dispatched where applicable.

A Spy at Twenty-One

Gabrielle Petit’s story is as mundane in some ways as it is extraordinary in others. She was not what anyone would have regarded as your average spy—which is what made her very effective in acquiring crucial information and disseminating it to the appropriate recipients. She was born in the small Walloon town of Tournai, located in the province of Hainault, in February 1893 to a very ordinary working-class family. After the untimely death of her mother, Gabrielle was sent to a Catholic boarding school to finish her studies as well as perhaps learn a skill with which she could support herself in her adult life.


In the spring of 1914, nothing could have prepared Belgium for the events that would essentially tear the continent apart and compel nations to side against each other. Alliances were formed out of desperate need and would only serve to destroy states in the war’s destructive path, and many more countries would emerge out of the ashes of a war that was to end all wars. In June that same year, the heir to the Austro-Hungarian throne was deliberately gunned down by an anarchist seeking independence for Bosnia–Hercegovina, which was at the time part of the Austro-Hungarian Empire. On June 14, Gavrilo Princip (1894–1918) plotted to assassinate the heir Grand Duke Franz Ferdinand (1863–1914), who was accompanied by his wife during their visit to Bosnia’s administrative city of Sarajevo. Princep’s actions—killing both the Grand Duke and his wife—put into motion the events that would lead to the European continent to be engulfed in bitter hostilities as well as many other theaters of fighting around the world. Belgium, a small lowland country located between Germany and France with alliances on opposing sides, was in the worst position both geographically and politically. Hoping to remain neutral in the ensuing fighting, King Albert had insisted that if either nation’s armies attempted to cross Belgium’s borders in order to reach the enemy, his army would resist. News emerged that Belgium was keeping its word. When Imperial German forces crossed Belgian boundaries, the Belgian army fought with both distinction and bravery, but to no avail, and as a consequence, the country was soon under German occupation.

At this time, Petit, just 21 years old, was living on her own in Brussels as a simple salesgirl. With the outbreak of hostilities, she volunteered to serve with the Belgian Red Cross as so many young women of her generation were doing. Petit was also engaged to a young man by the name of Maurice Gobert, whom she had met two years earlier. Gobert was a career soldier in the army, and as such, he was almost immediately sent to the front. After he was wounded in Hofstade and captured by the Germans, he managed to escape to his parents in Fontaine l’Évêque, very close to Petit’s own home town. After his recuperation from his wounds, Petit agreed to help him cross the border with the Netherlands in order to rejoin his regiment. 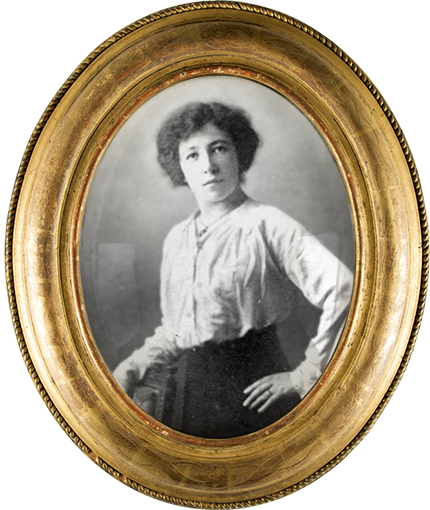 When she and Gobert reached their destination behind Allied lines, Petit shared with British intelligence many helpful observations she had made along the way. Petit was soon recruited by British intelligence, whom she had impressed with her observations. After some basic training she was provided with false papers and went on to gather further vital information about Imperial German troop movement and numbers. Petit increased her activities during the war when she began distributing La Libre Belgique, the daily newspaper that during the war became an underground source of information for the resistance. Aside from these activities for the resistance and British intelligence, Petit also helped other soldiers cross the border as she had done with her fiancé.

In February 1916, at just 23, Petit was betrayed by someone she had believed to be a Dutch resistance fighter but who was, in fact, a German. Petit was promptly arrested and imprisoned in St. Gilles, within the Brussels city suburbs. Almost immediately, Petit was tried, convicted and sentenced to death for espionage, her sentence to be carried out on March 1.

During her trial, it was recorded that Petit refused to reveal the identities of her fellow agents, despite offers of amnesty. Another secret agent, Germaine Scaron, also 23 years old and a close friend of Petit, was arrested with her on similar charges. She, too, was imprisoned, but she was spared by the authorities and released later for lack of sufficient evidence, despite protests from the German authorities. Had Petit divulged Scaron’s part in the operation, Petit’s life may have been spared, but she revealed nothing and heroically kept silent.

After the conclusion of the war, Petit’s story was known by only those who had known her, but before long, her story had spread far and wide in Belgium and reached all the way up to the royal family. In May 1919, Gabrielle Petit received a state funeral with military honors. Among those in attendance was HM Queen Elisabeth, wife of King Albert, as well as Prime Minister Leon de La Croix and the Catholic Church’s representative Cardinal Mercier. Petit received one of the greatest acknowledgments in Belgium when, in 1923, a statue dedicated to her memory was unveiled in the town of Tournai, Hainault. This statue is believed to be the first of its kind in all of Europe to be dedicated to the memory of an ordinary, working-class woman.