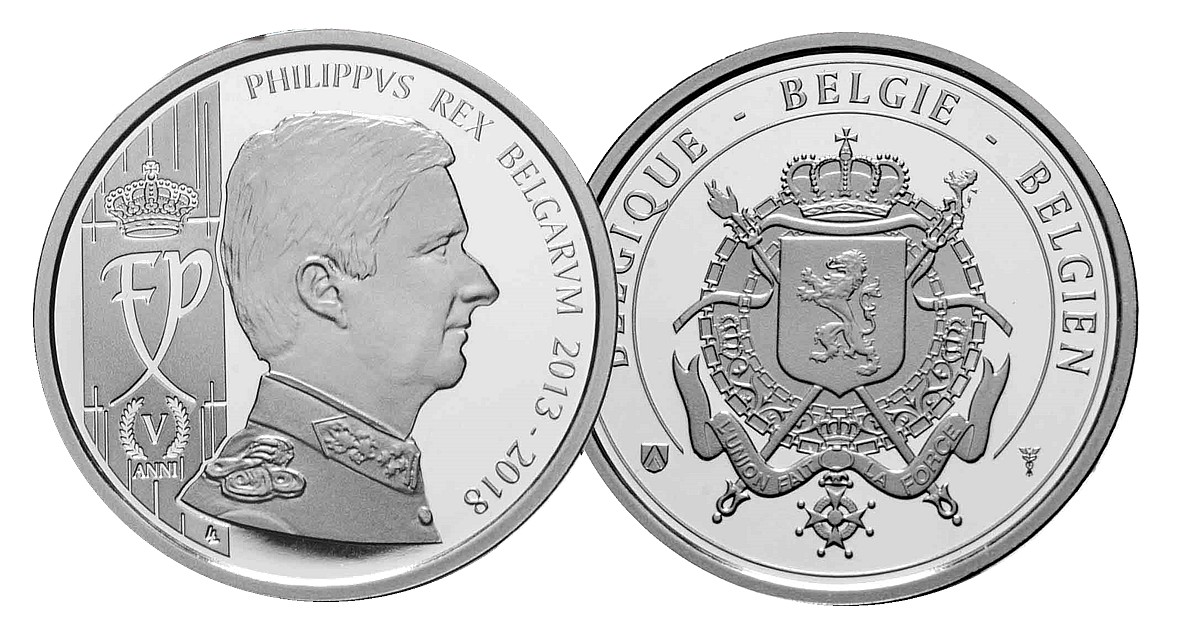 The National Bank of Belgium has authorised the release of new mint sets dated “2018” that will include all eight denominations of the euro coinage in circulation within the Euro-zone area, and, in celebration of the fifth anniversary of the accession of King Philip, a special anniversary medal has been included in the set. Included in the set is the current series of Belgian coins depicting HM King Philip, who succeeded his father King Albert II upon his abdication on the 17th July 2013. This particular date is celebrated in Belgium every year as the country’s national day of attaining independence from the Dutch crown in 1830.

King Philip was born on the 15th April 1960, as the first child to HRH Albert, Prince of Liege, and HRH Princess, Paola of Liege. The Prince of Liege was the younger brother of the-then king of Belgium, Baudouin (1930–1993), and as the king had no children, it was believed that someday Prince Philip would succeed his uncle. However, in August 1993, King Baudouin died unexpectedly at the age of 63, and instead of Prince Philip becoming king, the 59-year-old Prince of Liege succeeded his brother — elevating Prince Philip to that of Crown Prince of Belgium with the title, Duke of Brabant. On the 4th December 1999, the somewhat shy and reserved Prince Philip married his fiancé Jonkvrouw (Lady) Mathilde d’Udekem d’Acoz, which was an event celebrated throughout the country with great delight. Together, they welcomed their first child — a daughter who was born on the 25th October 2001. Named Elizabeth, she was designated as Crown Princess of Belgium upon her father’s accession.


The coins included in the Mint set are produced by the Herdenkingsmunten, a subsidiary of the Royal Dutch Mint, and are the official producers of Belgian coins on behalf of the National Bank of Belgium. The set includes the eight denominations currently in circulation within the euro-zone from one cent to two euros. A cupro-nickel commemorative medallion with a diameter of 30 millimetres is featured in the centre of the presentation with the eight denominations surrounding it. The design is the work of former Royal Belgian Mint engraver Luc Lyclux and includes an effigy of HM King Philip facing to the right, and is depicted in his military uniform. The legend in Latin reads PHILIPPVS REX BELGARIVM 2013 – 2018 and is placed partially around the king’s portrait towards the right side. King Philip’s official crowned monogram and commemorative anniversary insignia are placed to the left of the portrait. The reverse includes the official crest of the Kingdom of Belgium with the text BELGIQUE – BELGIE – BELGIEN, representing all three official languages of Belgium, and is placed above the primary design.

The 2018 Brilliant Uncirculated mint set, with a limit of 40,000, includes a variety of images of the royal family and is available directly from the Herdenkingsmunten.be, who are the official producers of Belgian coins for the Belgian state, and the only official distributor of Belgian circulation and collector coins. For additional information on these coins and others issued by the National Bank of Belgium, please visit their website.