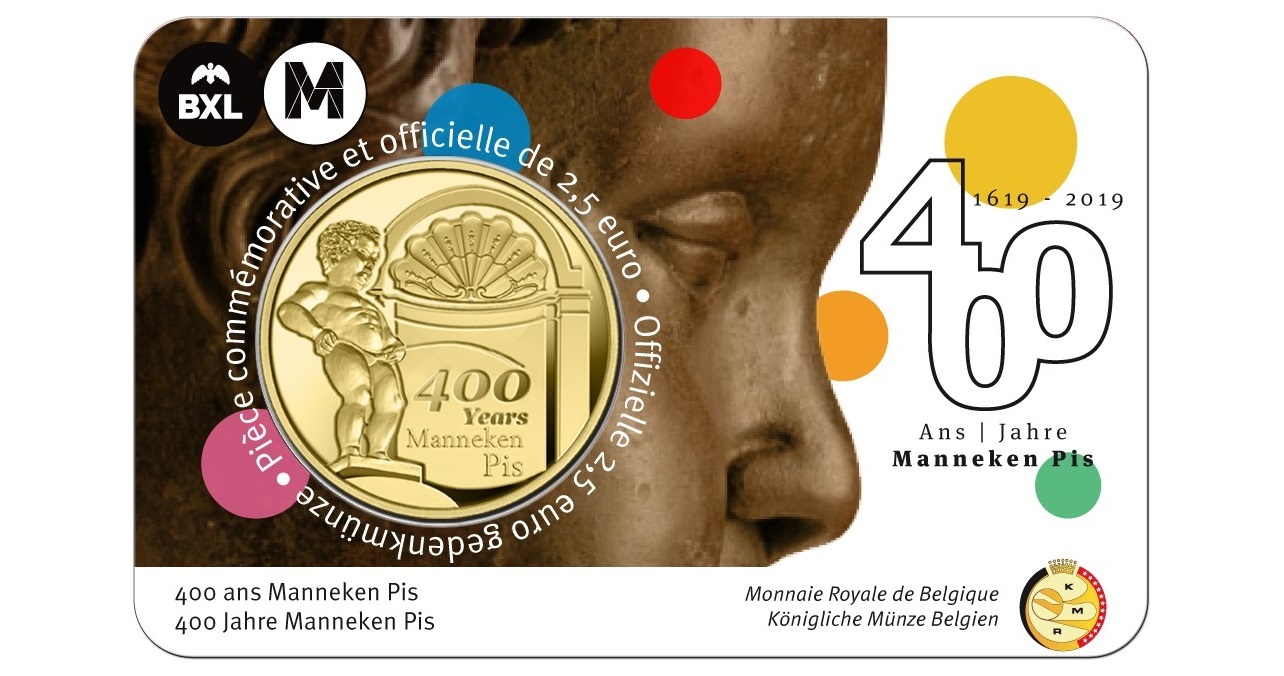 The National Bank of Belgium will issue new collector coins which are in observance of the 400th anniversary of the placement of one of the country’s most recognised national symbols — the little statue of Manneken Pis. An instantly identified sight, the little boy who wees into a fountain has been on a square in the city of Brussels, the present-day capital of Belgium, since 1619. Since then, he has been an endearing and constant sight over the many years, and during the many events the city and country have experienced.

The legend around the origins of the statue depicting a boy who is posed over a fountain are many. However, there is mention of the existence of Manneken Pis that was found in an administrative text dating from 1451–1452. From its origins, the fountain played an essential role in the distribution of drinking water and stood on a column which poured water into a double rectangular basin of stone. This first statue was replaced by a new bronze 61-centimetre (24-inch) version created by Brussels’ sculptor Hieronimus Duquesnoy the Elder (1570-1641), which was commissioned in 1619. It was first positioned on the corner of Rue de l’Étuve/Stoofstraat and Rue des Grands Carmes/Lievevrouwbroerstraat.

In 1770, the column and the double rectangular basin disappeared, and the statue was integrated into a new decor in the form of a stone niche in rockery style which was recycled from another dismantled fountain of Brussels. The newly designed fountain’s water flowed through the little boy and into a basin and in its new setting. Manneken Pis gave the impression of being smaller than in its original layout. With the addition of railings in 1851 which protect the entire structure, this move, unfortunately, prevented access to water, negating its original function and thus relegating the fountain to a decorative and symbolic role.

The little chap has over the years been the focus of several mishaps, including being “kidnapped” on more than one occasion — the most well-known having occurred in 1963. By 1965, a new replica statue was put in place, the original statue being permanently preserved at the Museum of the City of Brussels. With a relocation to the corner of Rue du Chêne/Eikstraat and Rue de l’Étuve/Stoofstraat, Manneken Pis is just a stone’s throw from the centre of the Grand Place (Grootmarkt). Depending on the time of year you pass by, you may on occasion see the little city mascot dressed in a variety of costumes, ranging between a knight of the Seven Noble Houses of Brussels, Santa Claus, or even Dracula. He has an extensive wardrobe to choose from, which includes more than 900 such costumes. On the 16th October, this commemorative coin will be officially presented at the press conference marking 400 years of Manneken Pis in the museum Patriciërshuis in Brussels. 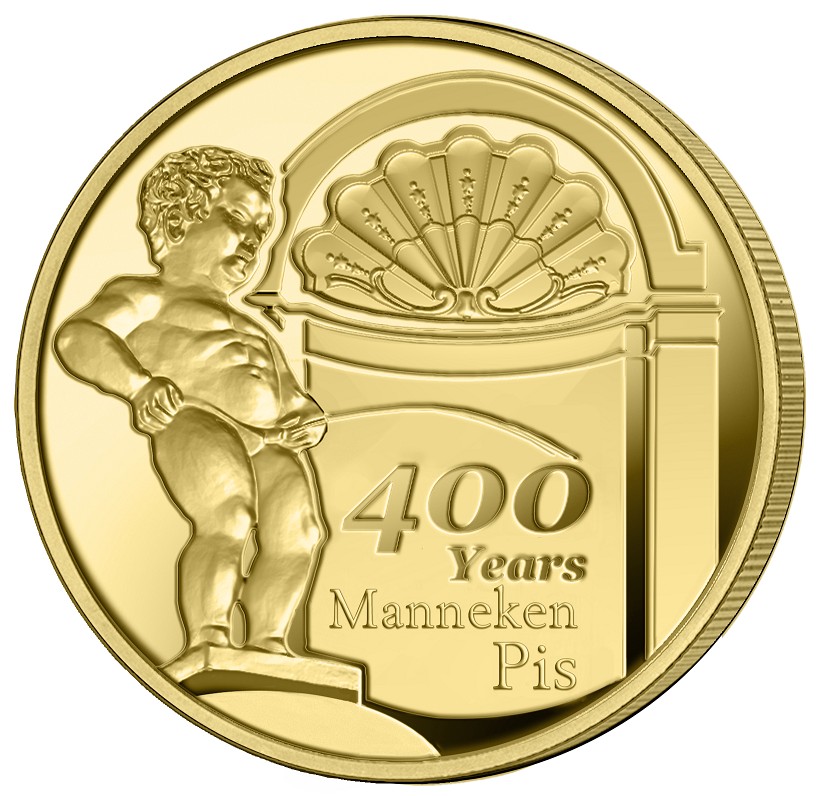 The Royal Dutch Mint produces the golden-colour coins under licensing of the Royal Belgian Mint, on behalf of the National Bank of Belgium. The obverse side features the little boy himself, doing what he is famous for, along with a replication of the ornate enclave which comprises the background of the fountain at its present location. The inscription 400 Years Manneken Pis is placed to the lower right of the design. 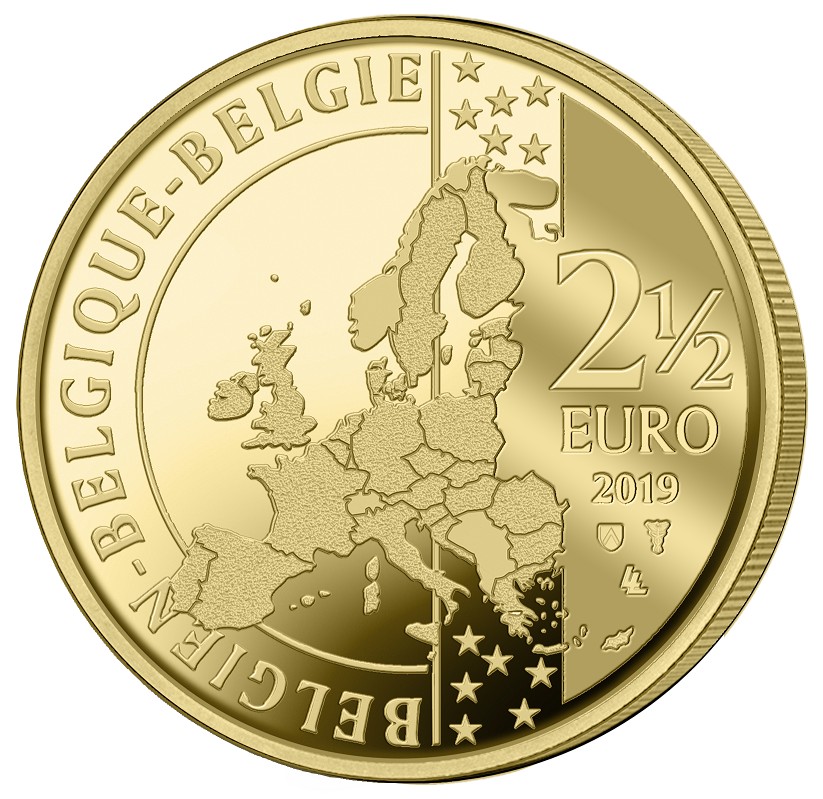 The reverse side, also designed by Luc Luycx, includes an EU map partially encircled with the words BELGIE – BELGIQUE – BELGIEN, representing the three official languages of Belgium. The denomination of 2 ½ EURO and the year of issue, 2019, are placed to the right of the map. Available on the 16th October, the Brilliant Uncirculated coins are individually encased and presented in a colourful coin-card format with images referring to the 400th anniversary of this internationally renowned landmark.

The 2.5-euro coin will be available in two language versions (Dutch obverse and French obverse) and will also be included in the FDC mint set featuring the city of Brussels for 2019. For additional information about this coin and other coins issued by the National Bank of Belgium, please visit the website of the Royal Mint of Belgium.