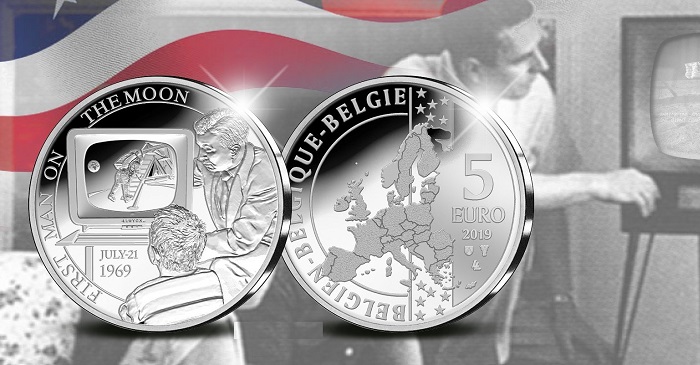 The National Bank of Belgium will issue (21st July) new collector coins which honour one of the world’s most historic events — the day when the first man set foot on the Moon. It will be exactly 50 years ago when the first human set foot on the moon. The extraordinary accomplishment had been promised just eight years prior by U.S. President John F. Kennedy in a speech delivered on the 25th May 1961 before a joint session of Congress that set the United States on a course to the Moon. More than a year later, on the 12th September 1962, President Kennedy delivered his speech before a crowd of 40,000 people in the Rice University football stadium, many of them school children. At this time, the president spoke the words which resonated with the whole country:

That extraordinary event, once thought to be impossible, occurred on the 21st July 1969 (European time), when young and old watched on television as the American astronaut Neil Armstrong made the first successful step. After setting foot on the surface of the Moon, he then spoke the legendary words:

That’s one small step for a man, one giant leap for mankind.

The Royal Dutch Mint produces the coins under licensing of the Royal Belgian Mint on behalf of the National Bank of Belgium. The design is the work of well-known artist Luc Luycx, who recreates the scene in many living rooms across the world when much of the family, young and old, came together to witness U.S. astronaut Neil Armstrong take the first step on the Moon. Looking carefully, you will see the artist’s name where the brand of the television would ordinarily be, just under the screen. The text in English, which is placed around the primary design, reads FIRST MAN ON THE MOON.

The reverse side, also designed by Luc Luycx, includes an EU map partially encircled with the words BELGIE BELGIQUE BELGIEN, representing the three official languages of Belgium. The denomination of 5 EURO and the year of issue, 2019, are placed to the right of the map.

Available from the 21st July, the Proof quality silver coins are individually encapsulated and presented in a custom branded Royal Belgian Mint case and are accompanied by a serially numbered certificate of authenticity. For additional information about these coins and others issued by the National Bank of Belgium, please visit the website of the Royal Mint of Belgium.