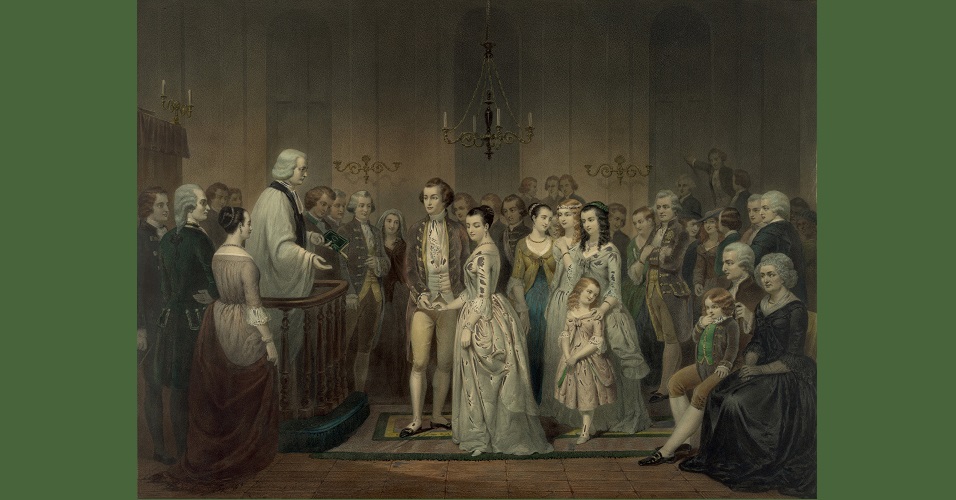 The wedding of George Washington and Martha Dandridge Custis, January 6, 1759, at her estate in Virginia. (Courtesy of the Everett Collection via Whitman Publishing.)

The portrait on the inaugural coin was designed and sculpted by Joseph F. Menna, at the time a relatively new hire on the Mint’s staff of medallic sculptors. Menna is classically trained, a graduate of the University of the Arts in Philadelphia and the New York Academy of Art in Manhattan. When he was hired in 2005, he was also the Mint’s first full-time digitally skilled artist. “He became a teacher and a mentor to the Mint’s staff in everything related to digital sculpting,” retired chief engraver John Mercanti would later recall. Mercanti nicknamed Menna the “Yoda” of the new technology.

Today Joe Menna himself serves as the Mint’s chief engraver—the 13th artist to hold that position since Robert Scot in the 1790s.

His portrait of Martha Washington, in a three-quarter profile gazing quietly at the viewer, bespeaks the dignity and modesty of the first of the nation’s First Ladies. 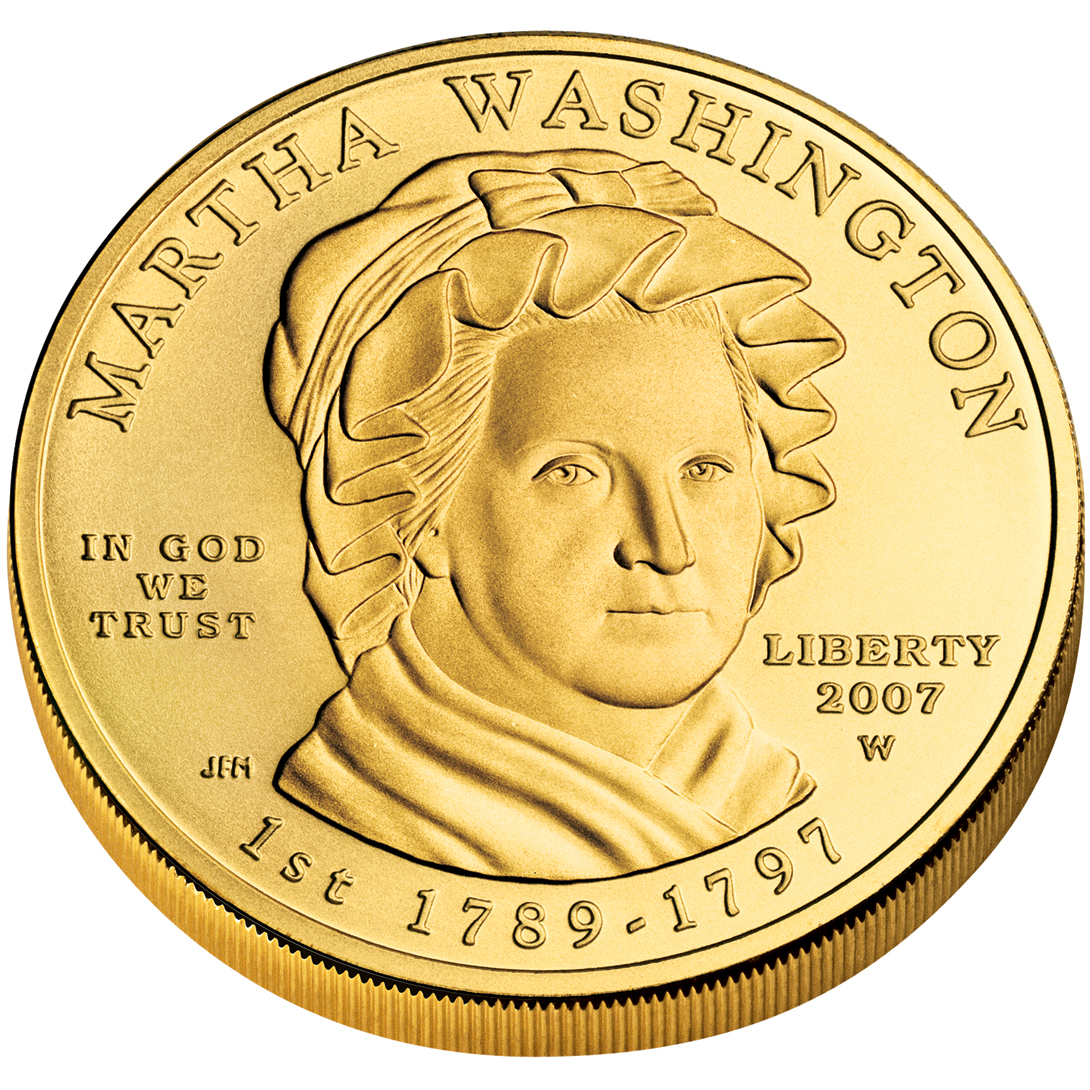 The late Susan Gamble, a Master Designer in the Mint’s Artistic Infusion Program (AIP), designed the coin’s reverse, showing Washington during the Revolutionary War, sewing a button onto her husband’s uniform jacket. While the former British colonies were struggling for independence, Martha’s obvious concern for the fighting forces—officers and their families, as well as regular soldiers—earned her the respect and admiration of the troops and the nickname “First Lady of the Continental Army.” Gamble’s design is well balanced, with detail, texture, and white space contributing to the whole. 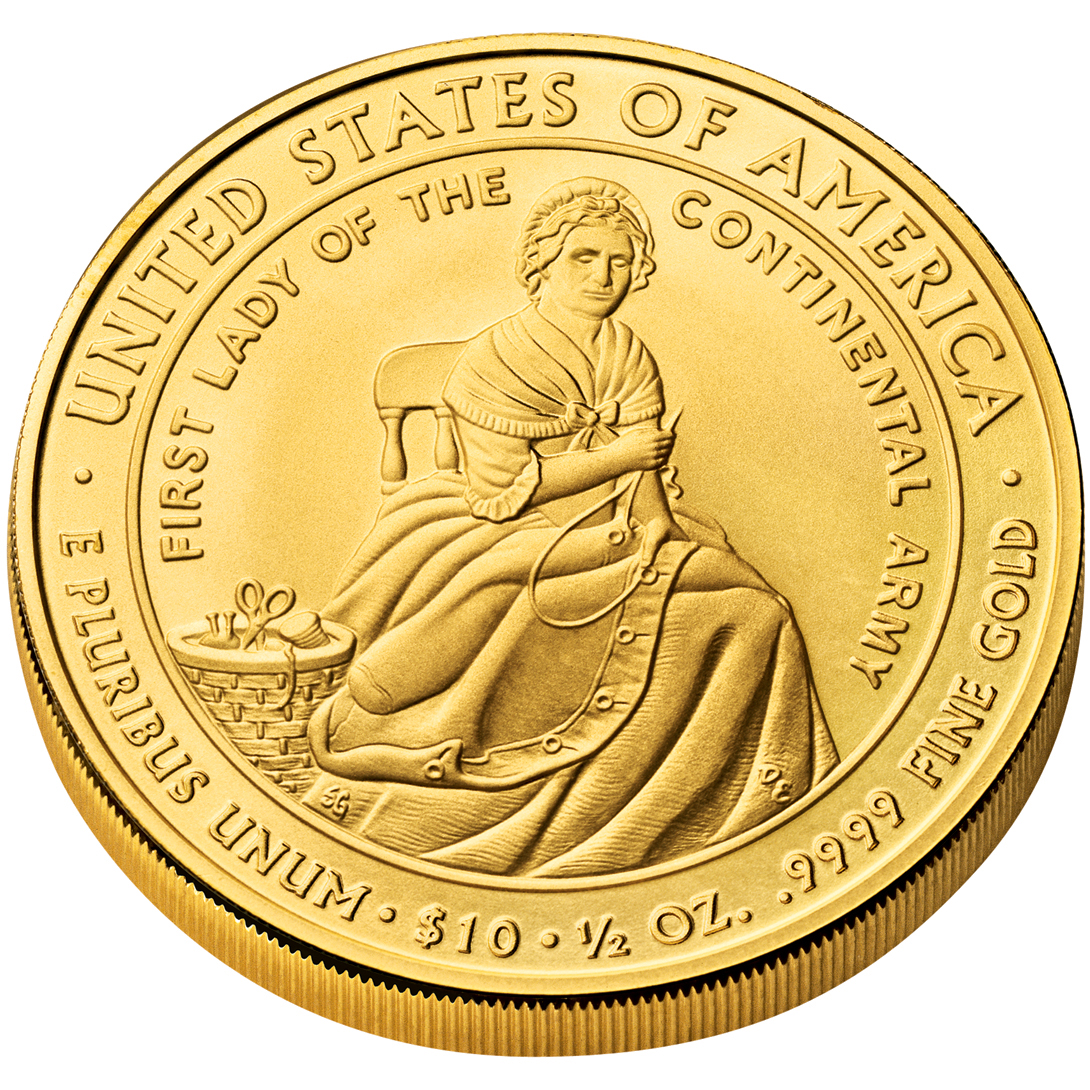 “Martha Washington is known to have organized sick wards and persuaded the society ladies of Morristown to roll bandages from their fine napkins and tablecloths, as well as to repair uniforms and knit shirts for the poorly equipped Continental soldiers,” the Mint noted in its promotional literature. “Her presence in the encampments of the Continental Army was an example to other officer’s wives and a significant factor in lifting the morale of her husband’s tired, cold, and hungry troops.” 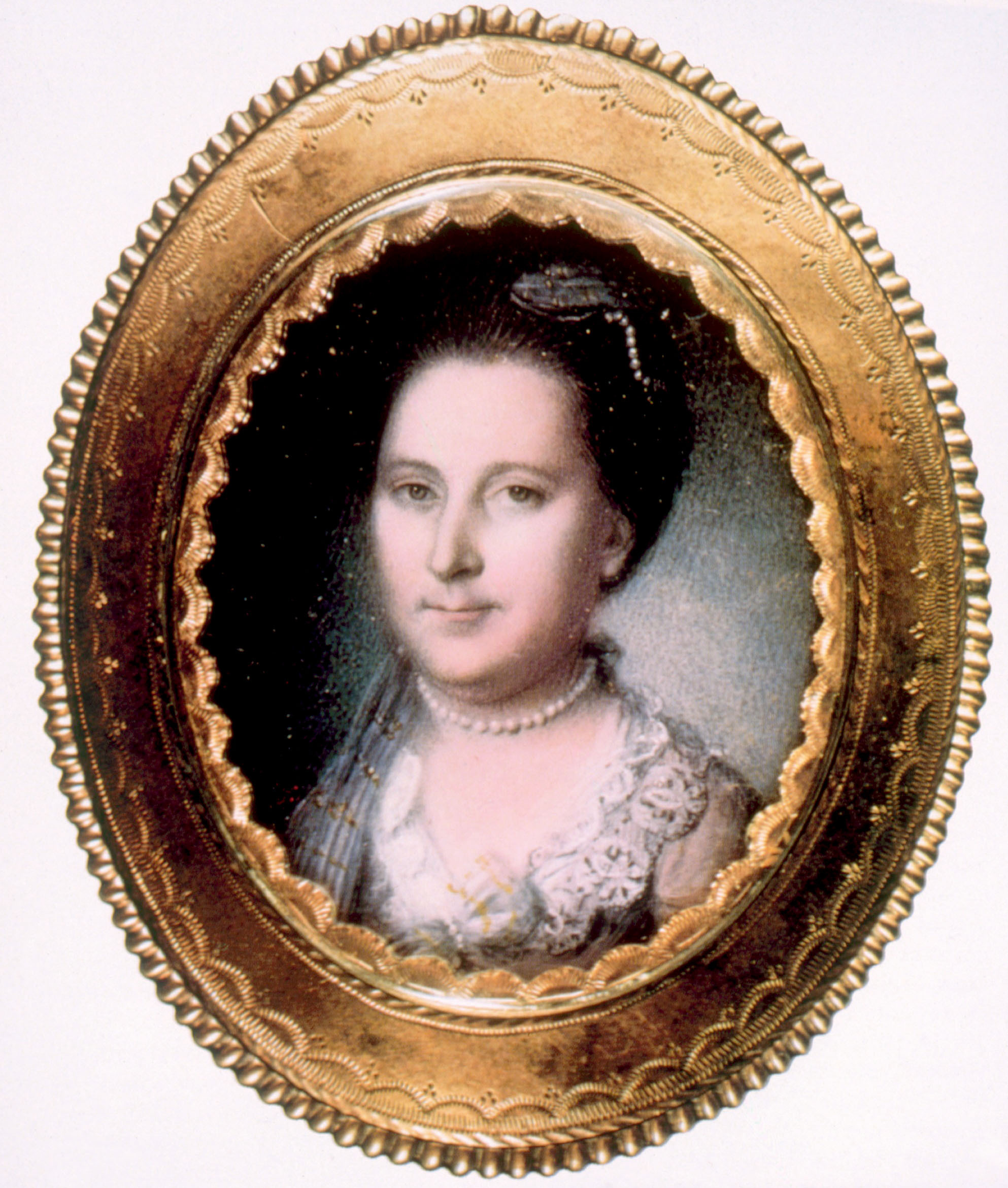 A miniature portrait of Martha Washington, circa 1776, by Charles Willson Peale. (Courtesy of the Everett Collection via Whitman Publishing.)

In early May 2007 gold was averaging about $665 per ounce. On May 10, the Mint announced that it would start taking orders for the Martha Washington First Spouse gold coin (as well as the Abigail Adams coin) at 12:00 noon Eastern Time on June 19. Prices were set at $410.95 for the Burnished version and $429.95 for the Proof.

Ordering limits were set at five coins per household for each format. Maximum mintage for the type would be 40,000, capped at 20,000 Burnished and 20,000 Proof.

The coins sold out within hours.

After the issue sold out, in the early summer of 2007 collectors eagerly tuned in to eBay to watch as the Martha Washington gold coins hit the secondary market. The popular online-auction venue attracted interested bidders from beyond the numismatic community, adding to the demand and driving prices up. There was an active amount of “flipping,” where a speculator would purchase a quantity of the coins from the Mint (ordering the household maximum of 10 coins and enlisting friends to do the same), study and compare them under magnification, send the finest examples to PCGS or NGC for grading, and quickly put those graded MS-69 and, especially, the MS-70s up for bid, seeking to profit from the hobby community’s excitement over a new coinage issue in high certified grades.

By mid-summer, the coins were seeing premiums of $100 over their issue price (nearly a 25 percent increase). Some buyers held back their finest coins, hoping for the market to mature and grow after the super-fast Mint sellout, and expecting holiday gift-giving demand to bring a further rise in prices. First Strike and 70-graded coins were quick to earn strong premiums, especially in eBay auctions with low starting bids, which caused bidding frenzies. The slightest delivery delay from the Mint added to the anticipation and excitement. Soon registry-set collectors and aficionados of ultra-modern coins added to the demand for the highest-graded coins.

Skeptics noted that a 69 and a 70 are visually indistinguishable for the average observer, that most ultra-modern U.S. Mint products are in perfect Mint State or Proof condition, to begin with, and that certification and auction fees and other expenses would eat into any potential profits. Bullish speculators countered that while modern gold coins might have a higher buy-in “floor” than modern silver or classic U.S. coins, they represent a good investment simply for their precious-metal content, even disregarding numismatic premiums. 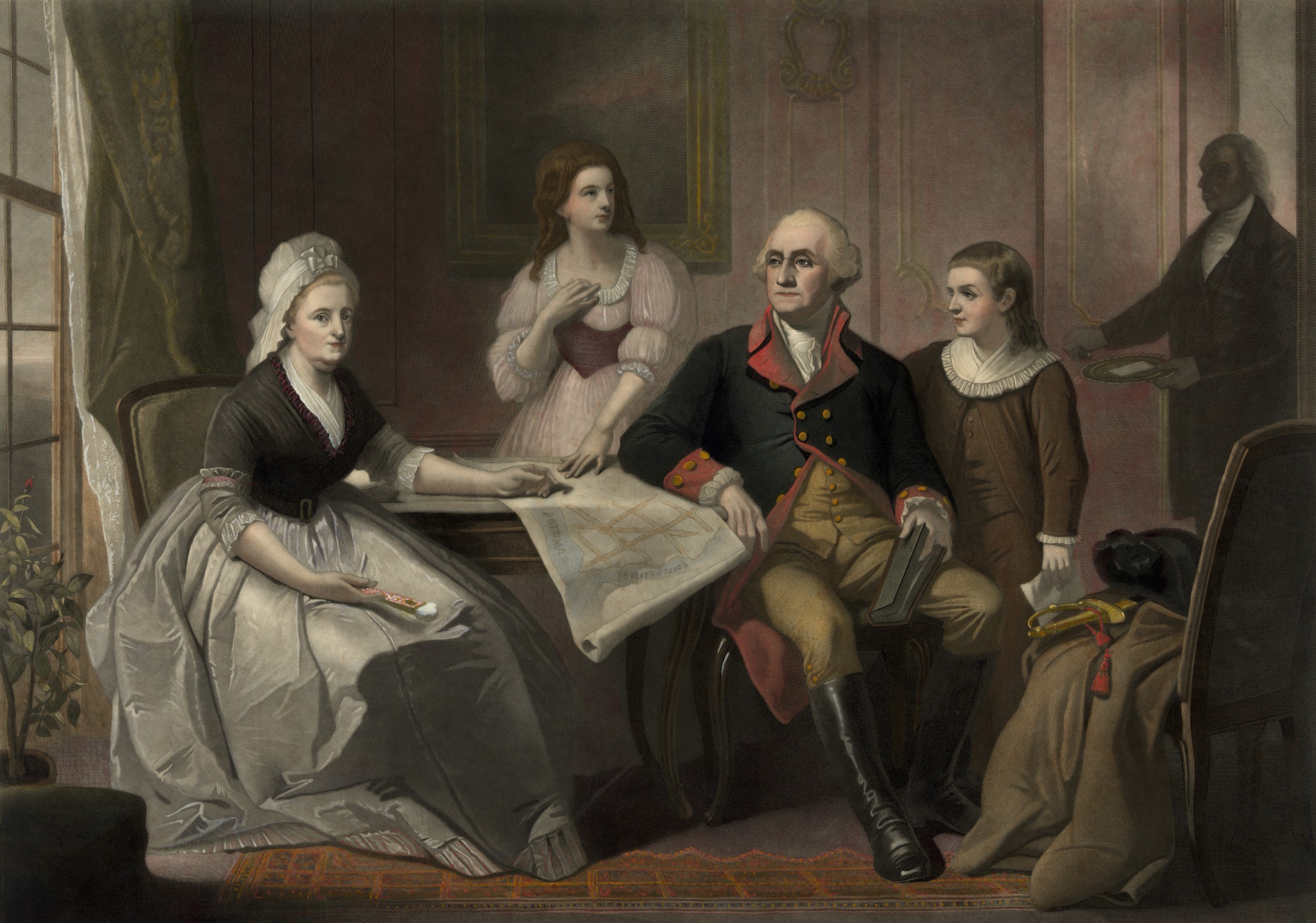 George and Martha Washington with their grandchildren, George Washington Parke Custis and Nelly Custis, circa 1790. The servant at right is probably William Lee or Christopher Sheels. (Courtesy of the Everett Collection.)

The demand for the new Martha Washington coins wasn’t entirely speculative, of course—traditional collectors sought them as well as arbitrageurs and investors. Mass-market distributors sold a good number of the Washington coins by way of frequent television promotions aimed at casual collectors. Some hobbyists possessing sufficient nerve and deep-enough pocketbooks bought more than one coin, hoping to quickly flip their extras to subsidize the one or two kept for their personal collection.

Over time collectors observed that an occasional slabbed coin would develop orange or red-orange toning (actually a form of copper spotting caused by improperly mixed alloy, as gold itself doesn’t tone). This effect is sometimes attractive, sometimes oddly mottled. Some collectors prefer to keep their coins in their original Mint packaging, where they maintain their original luster and surfaces.

Because of its high mintage, today the Martha Washington gold coin is one of the most affordable in the First Spouse series, even in the highest certified grades. This is so for all of the 2007 issues.

After this auspicious start to the First Spouse gold program, both Joseph Menna and Susan Gamble continued on to design many important U.S. coins and medals—including, as we’ll see, numerous other First Spouse gold coins. 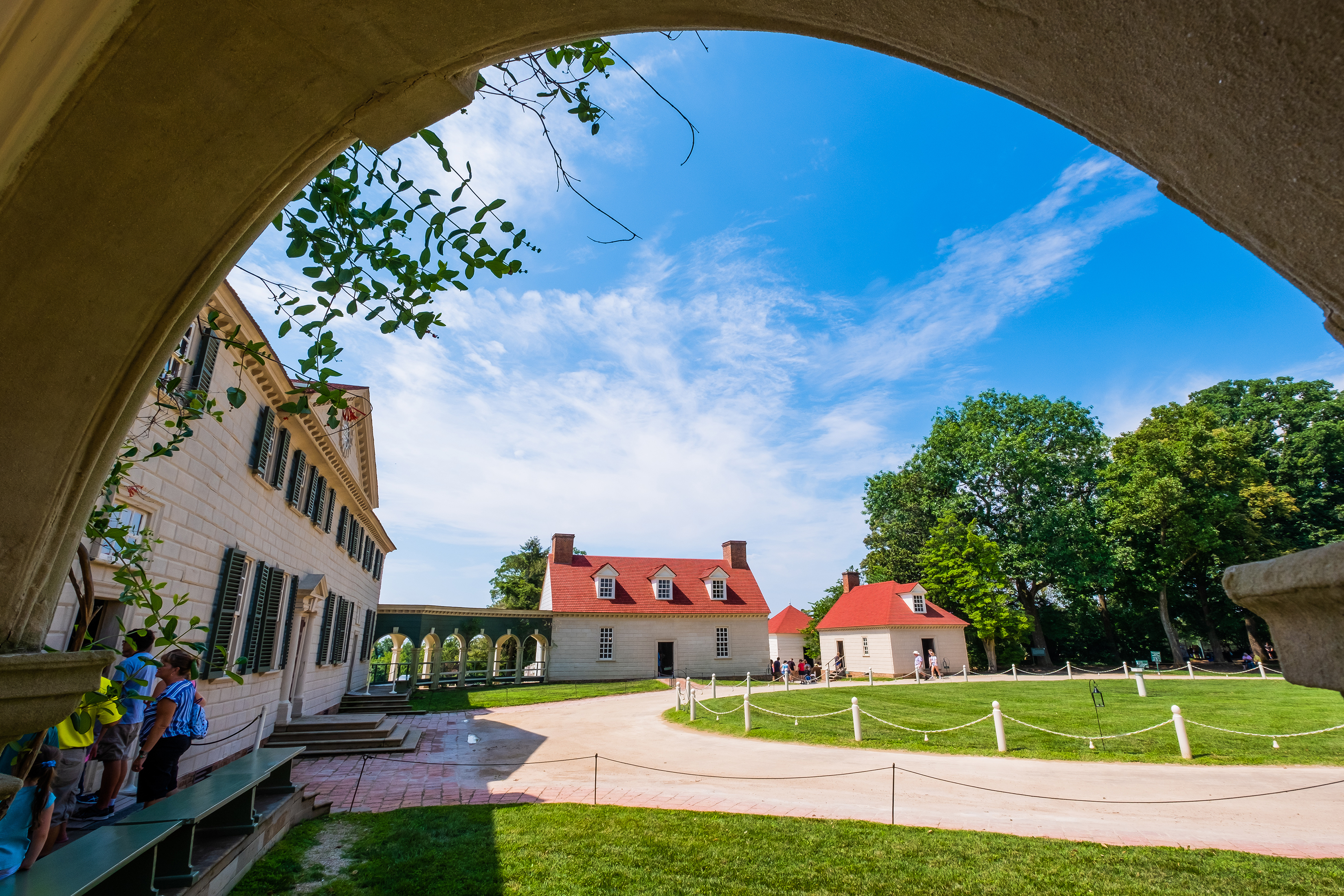 A view of Mount Vernon, the Virginia home of George and Martha Washington. (Courtesy of CK Foto, Shutterstock.)

Dennis Tucker is the publisher of Whitman Publishing, LLC. His column “Behind the Scenes: First Spouse Gold Coins” covers the United States Mint gold coin program that honors America’s presidential spouses. Whitman is the Official Supplier of the congressionally chartered American Numismatic Association. The firm produces many standard references relating to the art and science of numismatics (the study of coins and related objects). Numismatics is a field that touches on American financial and banking history, economics, artistry and design, technology, mining and metallurgy, political history, society, and culture. Other columns by Tucker include “Notes Published” (about books and publishing in general, with a special emphasis on antiques and collectibles) and “From the Colonel’s Desk” (about the Commonwealth of Kentucky’s position within American numismatics).

Dubious double mint sets: What you should know