On April 29, 2011, the National Bank of Poland issued a silver crown coin to mark the beatification of the late John Paul II. He served as Pope from October 1978 until his death in April 2005, ending one of the longest papal reigns in history at 26 years 168 days. 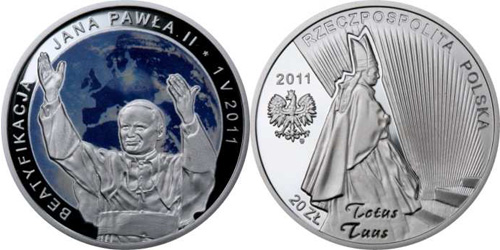 Minted by the Mennica Polska, (The Mint of Poland) the coin honors its most famous son who is now one step closer to sainthood after the announcement on the 1st May from Vatican City. The coin, with a denomination of 20 Zlotych is the work of artist Ewa Tyc – Karpińska. The obverse shows John Paul II with his arms outstretched to greet the masses. A color application is included over the background image of the globe, as John Paul II was the most widely traveled pontiff in history. The reverse depicts the late pontiff ascending a staircase.

The coin is struck to proof quality in .925 silver with a weight of 28.2 grams and a diameter of 38.6 mm. The coin will have a total mintage of 80,000 pieces. A 2 Zlotych coin struck in base metal is also available.

The Mint of Poland has also issued three gold coins to mark the beatification of John Paul II.

For more information about this coin and others offered by the National Bank of Poland, please visit their website at: http://www.nbp.pl/homen.aspx?f=/en/banknoty/kolekcjonerskie/2011.html