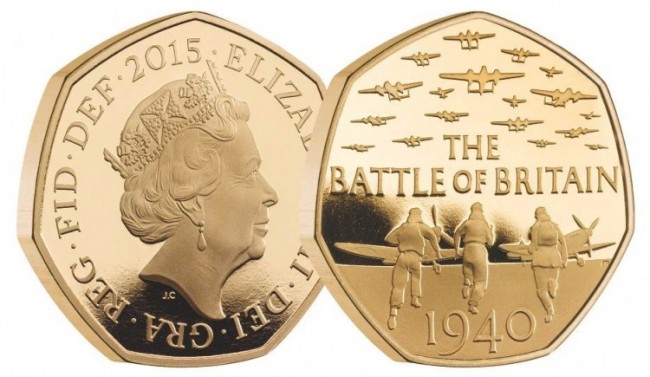 The Royal Mint has launched (July 6th) the precious metal versions of the commemorative 50 pence coin issued earlier this year to mark the 75th anniversary of one of the most decisive battles of the Second World War.

In the summer of 1940, Britain faced the threat of invasion. It would fall to brave young pilots and their crews to defend the country – and so the Battle of Britain began. It was truly their finest hour, for who can imagine the world today if they had failed in their task? Fought during the summer and autumn of 1940, the Battle of Britain was the name given to the air campaign waged by the German Air Force, or Luftwaffe, against the United Kingdom during World War II. The battle’s name comes from a speech by Prime Minister Winston Churchill, who anticipated the confrontation. “What General Weygand has called the Battle of France is over,” he stated. “The Battle of Britain is about to begin.” 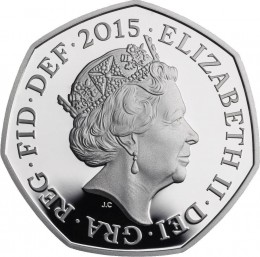 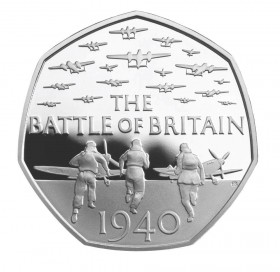 The Battle of Britain coins, now available in precious metal versions separate from earlier silver and gold proof sets, are designed by sculptor Gary Breeze in his first work for the Royal Mint. For the reverse image, Breeze pairs a sense of courage with foreboding, portraying scrambling airmen undaunted by a threatening swarm of aircraft overhead. The obverse effigy of HM Queen Elizabeth II is the work of Royal Mint engraver Jody Clark, whose portrait—the Queen’s fifth to grace British coinage since the start of her reign—has been used on all British coinage since its unveiling at the National Portrait Gallery in London on March 2, 2015.

Also available is a cupro-nickel BU version that includes the Rank-Broadley portrait of Queen Elizabeth II. For more information on the silver, silver piedfort, and 22 carat gold editions of this very special collector coin marking the 75thanniversary of this epic World War II battle, please visit the website of the Royal Mint at: http://www.royalmint.com/our-coins/events/75th-anniversary-of-the-battle-of-britain. Information offered in English; international orders dispatched, where applicable.