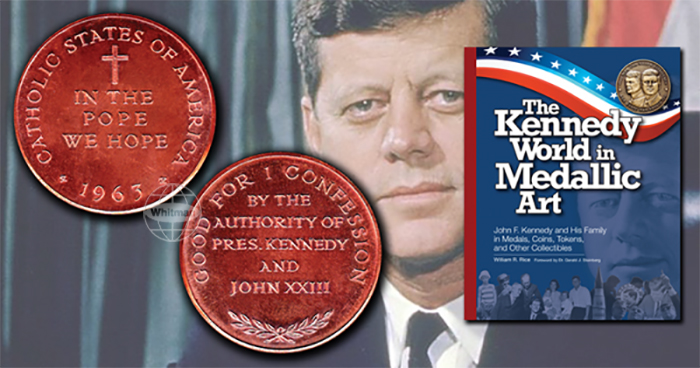 (Atlanta, Georgia) – In September 2014, Whitman Publishing introduced The Kennedy World in Medallic Art: John F. Kennedy and His Family in Medals, Coins, Tokens, and Other Collectibles, by William R. Rice. Rice is respected as a well-renowned Kennedy historian and his text shines a light on the more personal aspects of the life of President John F. Kennedy and his family. While President Kennedy is widely considered one of the most beloved presidents of the United States, he also managed to strike a nerve among some American Protestants given that he was the first Roman Catholic president. In The Kennedy World in Medallic Art, Rice highlights one of the controversial medals that the enigmatic entrepreneur Robert Bashlow crafted to possibly capitalize on the anti-Catholic sentiment of the time.

Robert Bashlow was known as a rather eccentric figure who financed many interesting and sometimes obscure projects. His endeavors in numismatic publishing are well established as he was close to coin historian Walter Breen. Rice describes that Mr. Bashlow possessed a wide range of interests, as he was also known for his published works which focused on the Vietnam War, music, and sexuality. Bashlow also had a rather tumultuous personal life and he was eventually evicted from his New York Riverside Drive apartment for fighting with his landlord and failing to make rent payments on time. Unfortunately, in July 1979, the New York Times reported that Mr. Bashlow was one of 80 people who perished in a fire at the Coronade Aragon Five Star Hotel in Zaragoza, Spain. The fire started as a result of a pastry machine exploding in the kitchen.

One of the legacies that Bashlow left behind was a Kennedy medal that is thought by Rice to be a practical joke, given his colorful history. Bashlow’s 32 millimeter satirical John F. Kennedy medal was struck in London, England, by the John Pinches Ltd. Co. and is available in bronze, silver, and gold mintages — the latter of which is reported to be held in the Smithsonian Museum. While the medal was produced in 1961 and sold by the Robert Bashlow Co. Inc. in New York City, its date reads 1963 on the obverse. Rice elucidates that the reason for this is because the common thought of the time was that by the end of Kennedy’s first term, the Catholic Church would be in total control of American politics. (Continued below.) 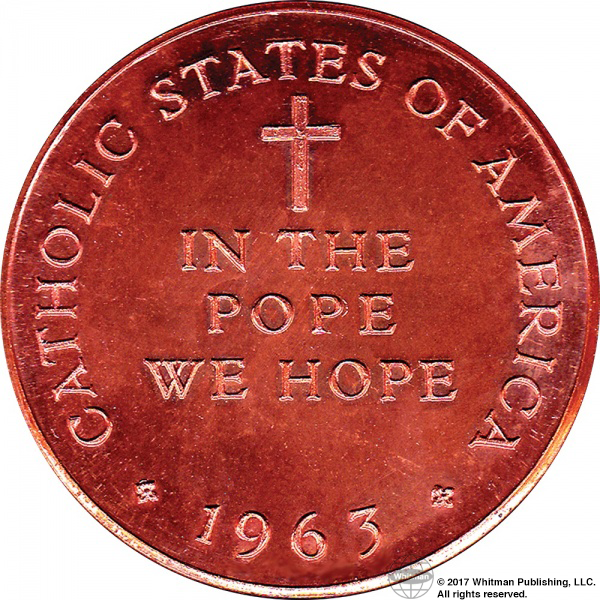 On the obverse, the coin’s inscription boldly proclaims CATHOLIC STATES OF AMERICA around the perimeter with the false date of issue, 1963, at the bottom. At the center is a crucifix with an inscription below that reads IN THE POPE WE HOPE. 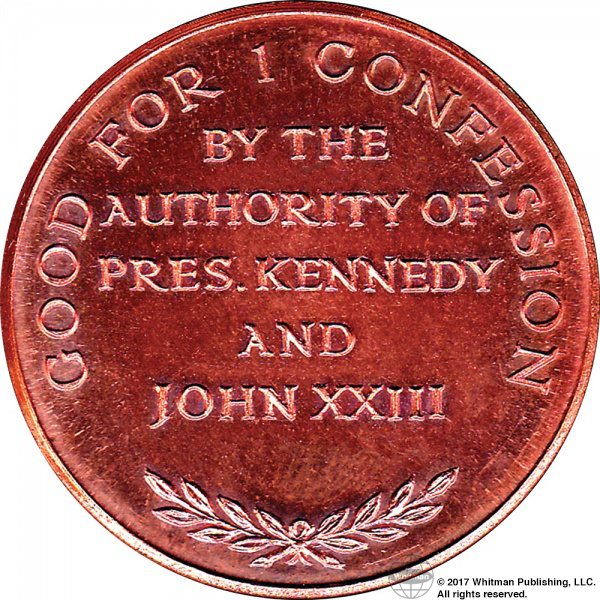 The reverse of the coin’s inscription reads GOOD FOR 1 CONFESSION around the perimeter. In the center, the inscription makes clear that the confessions are made legitimate BY THE AUTHORITY OF PRES. KENNEDY AND JOHN XXIII.

While the satirical anti-John F. Kennedy medal certainly pushes boundaries, it is still a piece of history that symbolizes the turbulence of early-1960s America. The medal boasts a personality of wry wit and satire befitting its creator, Robert Bashlow, who will perhaps always be remembered as one of the most infamous numismatic entrepreneurs in American history.

The author believes his work is a transitional reference and welcomes that future collectors and any interested parties bring new varieties and information to further enhance the continuation of this historic endeavor.—William Rice

About The Kennedy World in Medallic Art

Kennedy historian William Rice picks up the torch where researchers like Aubrey Mayhew and the great Edward C. Rochette left off in the 1960s, shining new light on the life of President John F. Kennedy. He explores the Kennedy family; JFK’s boyhood; his military service and early political career; his inauguration and presidency; Jacqueline and the children; life in the White House; the president’s assassination; and the world’s mourning and remembrance. The story is told through touching and insightful essays illustrated by hundreds of coins, medals, tokens, stamps, and other collectible memorabilia—some popular, like the silver 1964 Kennedy half dollar, others rare and seldom seen.

Coin Update sponsor APMEX stocks a wide array of Kennedy half dollars, as well as many of the word coins and medals honoring the 35th president of the United States.

Special sections discuss subjects like satirical and critical pieces; Robert F. Kennedy and Teddy Kennedy; the Peace Corps; and paper currency issued during the Kennedy administration. In addition to colorful historical images and narrative, the book’s scholarly appeal is expanded by a foreword by Dr. Gerald J. Steinberg, appendices, notes, a glossary, bibliography and full index. Collectors will benefit from the catalog numbering system and market prices in various grades.