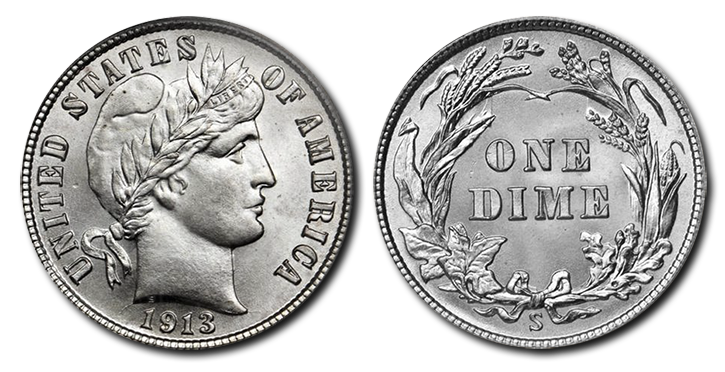 The British “wizarding world” of Harry Potter has enchanted readers and filmgoers with fantasy landscapes for the past 20 years, but this November Fantastic Beasts and Where to Find Them takes filmgoers on a historical journey to New York City in the Jazz Era. While the inciting incidents in the Harry Potter franchise have ranged from hundreds of owls swarming a suburban home to deliver enchanted letters, to an evil wizard sending magical Brown Shirts (Death Eaters) to attack a resistance wedding, creator J.K. Rowling sets Fantastic Beasts rolling with the flip of a Barber dime.

The film’s protagonist, Newt Scamander, is a collector—of magical creatures. In fact he has a Mary Poppins suitcase full of them. One of his favorites, a platypus-like marsupial called a niffler, is also a collector, but of a more familiar kind. When a passerby flips a Barber dime into the cap of a panhandler, the niffler, excited by the silver coin flashing through the air, escapes from the suitcase, setting Scamander off on a madcap dash across New York to recapture all of his precious collection.

The dime gets significant screentime. It flips end over end in a slow-motion arc as its journey is cross-cut with shots of the niffler prying himself out of the enchanted case and rushing up the stairs of a bank to snatch the panhandler’s hat. The obverse and reverse (assisted by CGI rendering) are in remarkable condition for a circulated coin, especially given that the action takes place in 1926, a full 10 years after the production of the Barber dime ended. It’s very easy to sympathize with the niffler—if I saw someone toss a Mint State Barber coin, I’d run to catch it too!

While Barber dimes certainly circulated to an extent in 1926, it’s worth asking why Fantastic Beasts didn’t feature a Mercury dime. The 1916 design has clear ties to Greek and Roman mythology, which Rowling bases much of her magical world on, and it was minted in record numbers in the decade between its introduction and the action of this film. My guess is that the choice had mostly to do with aesthetics.


While the subjects of both obverses had Greco-Roman influences, the Mercury dime has clear Art Nouveau characteristics, particularly in the lettering and the style of the reverse. Rowling, who read classical studies at Oxford University, created a magical world that is framed with nostalgia, and the more classical design of the Barber dime appeals to an older time both for modern viewers and in the context of the film. It’s also possible that the filmmakers felt that showcasing the fasces on the reverse of the Mercury dime would be anti-thematic in a film set during the run-up to the wizarding version of the Second World War.

I wasn’t quick enough to catch the date or mintmark of the dime as it revolved, so that’s a question we’ll have to leave for the niffler. As Christmas approaches, it’s worth noting that the Funko Pop! Vinyl line has a toy model of a niffler carrying a coin purse (retailing for between $10.00 and $13.00) that might be an inspiring gift for the young numismatists in your family, perhaps accompanied by a low-grade Barber dime.   ❑

Editor’s note: Having watched a score of trailers, interviews, and clips, I regret to report that the scene with the flying Barber dime doesn’t appear in any of them. However, I did find a delightful clip of the niffler, who’s invaded someone’s bank vault and resembles my Uncle Othel on Thanksgiving afternoon—only he’s kicked back in a pile of treasure instead of a recliner, and he’s stuffed with gold and silver coins.